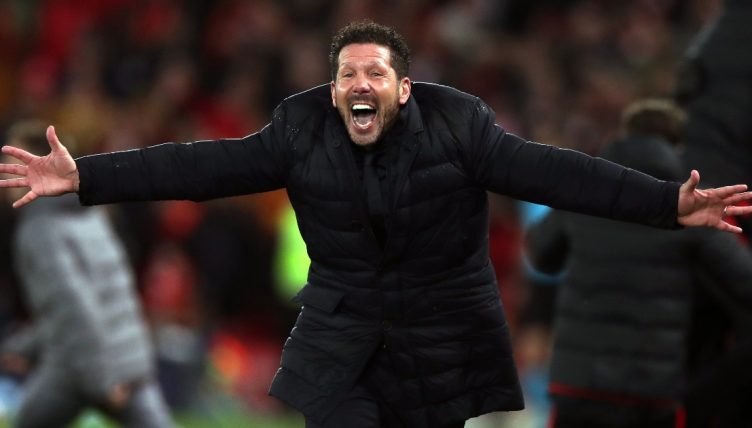 The answer, as with so many other things, is probably in the middle, Simeone and Atletico a necessary evil in a La Liga so often dominated by the money and fancy flair of Real Madrid and Barcelona.

But one thing undeniably true is that Simeone has forged the club in his image and, after a decade in charge, has made them a true mainstay of European football in a way they had never previously been.

So here are 10 matches that tell the story of Simeone’s 10-year love affair with Atletico; the good, the bad and the downright ugly.

An all-Spanish Europa League final, Simeone lifted his first title with Atletico in his first season in charge at the club.

This was meant to be a tight game.

Atletico faced no ordinary Athletic Club, rather this was Marcelo Bielsa’s extraordinary homegrown side which had not just knocked out Sir Alex Ferguson’s Manchester United, but had dominated them.

Alas, they were not facing any Atletico either, for this was Simeone’s newly envigorated side and they walked the final.

Within seven minutes, Radamel Falcao fired in the first, and he doubled the lead just before half-time. Diego added a third before the end of the game and Atletico waltzed to European football’s second-tier title, showing that they were anything but a second-tier side.

Welcome to the Simeone era.

Simeone’s first full season at the club brought with it his second trophy, this time in the Copa del Rey final over arch-rivals Real.

Cristiano Ronaldo scored the opener for Real, but it proved to be meaningless as the glitz and glamour of the Galacticos were hammered into submission by Simeone’s side.

Diego Costa, perhaps the most Simeone-esque player ever, slammed home an equaliser before halftime and then Miranda scored the winner in extra time.

It was a messy match, Jose Mourinho and Ronaldo both sent off and fuming with Atletico. That was no doubt exactly what Atleti’s Argentinian coach wanted.

It was the first time that Atletico had beaten Real since 1999, it came in a cup final and they won it in Real’s own stadium, ensuring that Mourinho’s final season at the Bernabeu ended trophyless.

Atletico had failed to beat Real Madrid in their previous 25 meetings leading up to the Copa final at the Bernabeu in 2013. After an intense 90 minutes,Joao Miranda’s header sealed perhaps the most defining win of the Cholismo era. 🔈 🔛pic.twitter.com/snUlJu7emx

The final day of the La Liga season. Barcelona v Atletico, Camp Nou. A point will give Atletico the title on head to head, a loss and Barcelona clinch it once more. It couldn’t be tighter.

Atletico hadn’t won the title in 18 years but now, with Simeone on the brink of his third trophy in three years, that would all change.

Over 96,000 people were packed into Camp Nou – almost all of them Barca fans – and the Atletico supporters crammed into the heavens in the unreasonably positioned away end.

Down at half-time, it looked to be over for Atletico but Diego Godin climbed highest at a corner to head home an equaliser.

For 10 years no one but Real and Barcelona had won La Liga, but Atletico held their lead as only they can and claimed an incredible league title. It was an achievement that cannot be understated.

To recall this match as a neutral is painful enough, but to be an Atletico fan it must be sheer torture.

From 1-0 up, seconds from the Champions League, to losing 4-1 in extra time. Simeone’s team had given it their all, all season.

First to overcome Barcelona and Real to the title and then to drag themselves to the precipice of European history and when it was so cruelly taken away they had no more to give, collapsing and handing their hated rivals La Decima.

Real Madrid were a minute away from losing the 2014 Champions League final.

Then Sergio Ramos did this 🔊 (🎥 @realmadrid) pic.twitter.com/9YzKSxjyhD

This was pure, unadulterated revenge.

Forget the fact that Real had an injury-ridden squad and their defence was a makeshift one, instead focus on the sheer glory of a 4-0 victory over your bitterly, bitterly despised rivals.

A Champions League semi-final against Bayern, away in Munich against a side managed by Pep Guardiola would have scared most sides.

But not one managed by Simeone. With the aggregate scores level at 1-1, Antoine Griezmann scored in the 53rd minute and Simeone knew he had almost returned his side to the Champions League final.

This was a typical Simeone performance, gutsy and determined. They sat back with 30% possession and asked Bayern to break them down. They couldn’t.

Want to know what’s worse than losing a Champions League final? Losing a second one two years later. On penalties. To the same bitter rivals.

Just try and picture it. Your team, who had never been a major contender for the Champions League before, losing a second final to your most hated opponents.

Club stalwart Juanfran missed the decisive penalty in the shootout and the right-back in tears is a picture that paints a thousand words.

As much as there are the highs of Simeone’s time, there are also the lows and this embodies them. So close and yet so far to the big one, it feels unlikely that Atletico will be in as good a position to win Big Ears any time soon. But you never know.

Easy to remember Juanfran for his penalty miss in the 2016 Champions League final. But remember, he has assisted both Godín's goal in the 2014 final and Carrasco's in the 2016 final.
Legend. Battler. Stud. pic.twitter.com/UhoW9EhDxK

As with every other Super Cup, the prestige of the August European one – a curtain-raiser, as we’re contractually obliged to describe it – is difficult to define. It’s definitely not up there with the Europa Leagues won by El Cholo’s Atleti, but it also probably means more than a Spanish Super Cup would.

But beating your rivals to deny them a trophy is always sweet, maybe better than actually winning the thing yourself.

This was a dominant but typical Simeone side. Atletico had eight shots and scored four of them. They took the lead in the first minute, found themselves 2-1 down late into the game but drew equal through Costa in the 79th minute. Then in extra time, they struck twice, clinching the Super Cup.

Earlier that summer they’d won the Europa League, cruising past Marseille with a 3-0 win in the final, but it capped off a disappointing campaign, in which they’d dropped out of the Champions League at the group stage.

Victory over their city rivals in a European final – alright, not quite the big one – was a statement that Simeone’s Atletico belong at the top.

Diego Costa (@diegocosta) was named the MOTM after his brace⚽⚽🥇pic.twitter.com/mJei7WBDj6

Cast your minds back to March 2020, just before the world went to shit, and Liverpool were as good and as dominant as any English side has ever been.

Jurgen Klopp’s Reds were the reigning European champions, and having been pipped to the league title by Manchester City the previous year, they were on a mission to make sure they’d go one better in 2019-20.

By the time Atletico came to Merseyside, they could afford to put their full focus on retaining the Champions League, having built an unassailable lead by dropping just five points from their first 29 league matches.

What’s more, Anfield retained an aura on European nights – Liverpool had produced some astonishing performances on their own patch under Klopp in Europe (that 4-0 win over Barcelona, anyone) and were on a ridiculously long-unbeaten streak at home in the league.

Cholo’s men arrived in Liverpool with a 1-0 lead from the first leg after a classically dogged Atleti display in the Round of 16 first leg at the Wanda Metropolitano.

But seeing it through would be a hell of an ask – and sure enough, Klopp’s side battered Atletico, winning out 1-0 over 90 minutes and forcing Jan Oblak into a Man of the Match performance.

But out of nowhere, Atleti came back into it, forcing mistakes from the otherwise indefatigable Virgil van Dijk – substitute Marcos Llorente (who later named his dog ‘Anfield’) scored twice and set up Alvaro Morata for a third.

Bought from Real and thought to be a defensive midfielder, a replacement for Rodri, Llorente has become an inspired creative attacking midfielder under Simeone – a testament to the Argentinian’s tactical acumen and ability to develop players.

“The La Liga side’s approach may not be a thing of beauty but they are a brilliantly drilled team and this was another landmark triumph for the master coach Simeone,” wrote Phil McNulty in his BBC Match Report. You can’t argue with that.

In fact, Simeone has transformed and rebuilt a new Atletico, with only Koke playing a role in both of their title wins.

Just like the last one, Atletico were pushed right until the final day and needed to battle back from a goal behind to do so – with Luis Suarez scoring the clincher against Real Valladolid in the 67th minute.

Barcelona had let him go for next to nothing, and just like David Villa before him, he made them regret it – the Uruguayan scored 21 league goals to fire Atletico to the title. Simeone and a great player with a point to prove is a deadly combination.