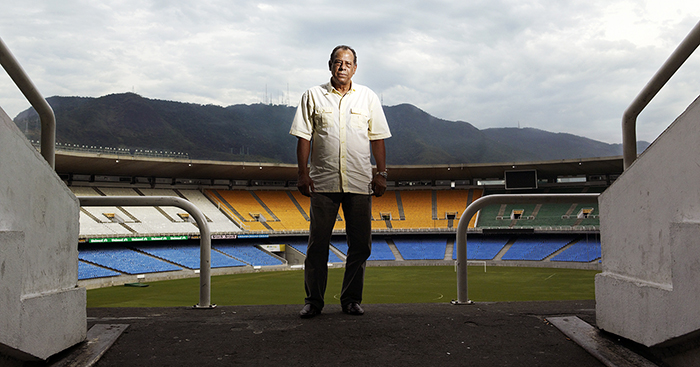 Back in 2008, with the backing of FIFA, Irish author Michael Donald set about tracking down and getting the story of every single player to have scored that most special of goals.

It took him six years, but Donald eventually managed it, and the result is his wonderful new book Goal!, featuring intimate portraits and interviews with everyone from Uruguay’s Alcides Ghiggia, who scored in 1950, through to Germany’s Mario Gotze, who did it in 2014.

“It remains the most exclusive club in football,” says Donald of his inspiration. “This is not some debatable pantheon – you are either in or out.” 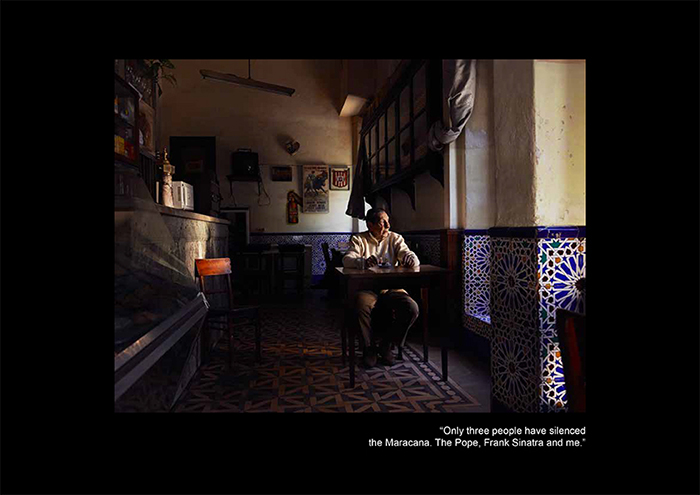 In different hands, we could have expected a book featuring similar interesting interviews with a few pictures thrown in. Donald, however, is an award-winning photographer and, as you might expect, puts a huge emphasis on the visuals.

Each portrait lists not only the year and venue of each scorer’s goal but where he has photographed them – Geoff Hurst at Hendon Hall (where England had stayed the night before beating West Germany), Gerson on a beach in Rio, Paul Brietner at the Olympicstadion in Munich where he scored from the spot against Holland, Paulo Rossi at his vineyard in Tuscany.

They’re all beautifully captured and there are some wonderful surprises and contrasts when turning through the pages of history.

Take the trio of 1982 Italian scorers. At the time, they were all dark and shaggy-haired young men of the early 1980s. Now? Rossi has the sheen of a greying ex-footballer doing well, Marco Tardelli looks like a chef and Alessandro Altobelli a member of the mafia. 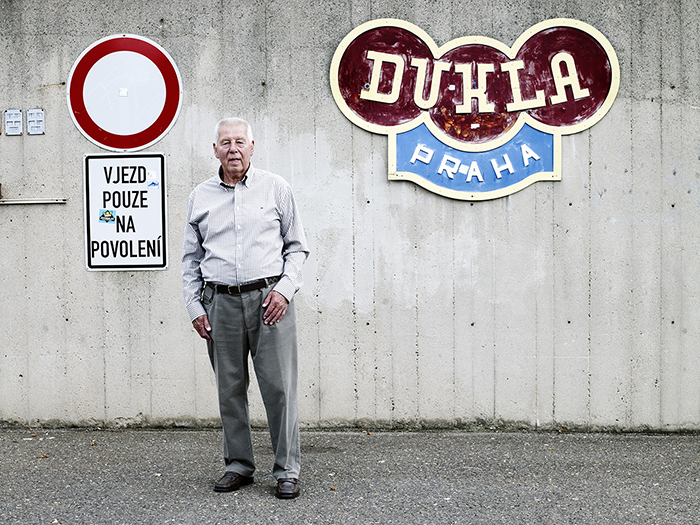 The interviews, meanwhile, are fascinating.

You’d expect many of the less household names to be dining out on their golden moment. But far from it.

Dutchman Dick Nanninga (sadly no longer with us), is magnificently humble. “I was a labourer’s son … I still am,” says the man who equalised for Holland against Argentina in 1978.

“My greatest achievement is my kids and my grandchildren. I mean .. OK, it was in a World Cup Final, but it’s still just a goal.”

Altobelli, scorer of Italy’s third in the 3-1 win over West Germany in 1982, also doesn’t revel in individual glory: “It’s the squad that wins. If each man is playing for himself, you’ve already lost.”

But he adds this: “That noise the net makes when you strike the goal, few people know it.”

When Donald completed his labour of love in 2014, there were 34 players who knew that feeling. Ghiggia, Jose Masopust, Zito, Carlos Alberto and Dick Nanninga have all since passed away, but their interviews are included along with the 29 still around to tell the tale.

Q: Would there still have been a book if you hadn’t been able to track down one of the living scorers? And what if that player had been Pele?

“That’s a really good question. The simple answer is no.

“In terms of completing the project the most obscure players had equal value to the likes of Pele and Zidane.

“There was a huge leap of faith in starting the project as we only had consent from about 30% of them. And many of them said no initially. When we travelled to Sao Paulo to shoot Pele we still weren’t sure he would turn up as his ‘people’ wouldn’t confirm anything.

“Although if it was Pele or Bertoni (who didn’t agree to it) I think we would have struggled to to get a publishing deal. ‘Intimate portraits and interviews with every living FIFA World Cup Final goalscorer (except one!)’ doesn’t have quite the same ring to it!”

Q: Who was the hardest to locate?

“Locating them wasn’t too difficult, although we never had a formula, it was more of a case of, ‘Does anyone know anyone who might know such and such…?’ 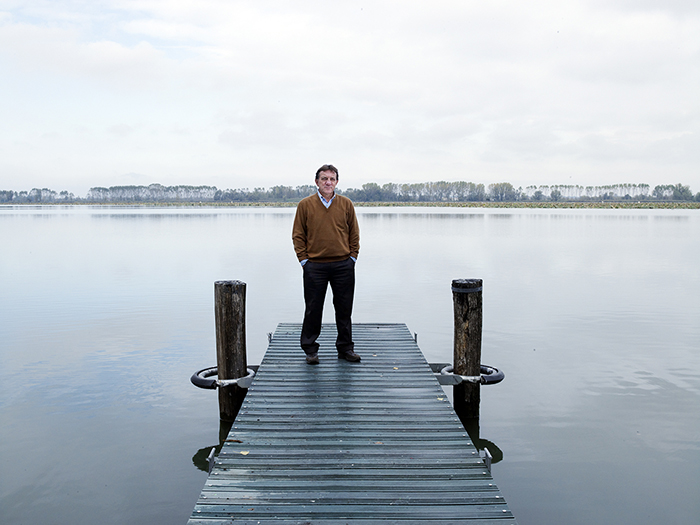 Q: Who was your favourite interview?

“My favourite was probably Tata Brown, who scored for Argentina in 1986. We interviewed him in his house in Buenos Aires. He made us tea with his kid running around.

“He was very humble and talked about the team rather than himself. He got very emotional during the interview and couldn’t express how grateful he felt to be lucky enough to be in the right place at the right time and not cock it up.

“He was saying, ‘I was in the same team as Maradona! What’s that about?’ His shoulder got dislocated and he didn’t let anyone know because he didn’t want to go off, so he bit a hole in his shirt and put his thumb in the hole to hold his arm like a sling. He showed us the shirt.” 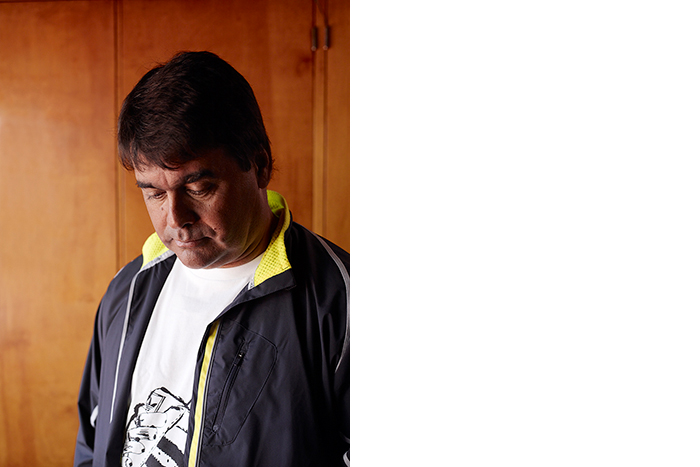 Q: Do any of the scorers keep in touch with each other? If not, do you have a secret desire to get them together for a party and photoshoot?!

“I think in the countries that have larger numbers of scorers like Brazil and Argentina they see more of each other. It’s not that they are mates as such, but they see each other at events.

“Some of the older teams held reunions, but as they started passing away they stopped doing it. I’m not sure the younger teams have done that. As for getting them all together, if someone wants to organise that I’ll happily do the photoshoot. Good luck!” 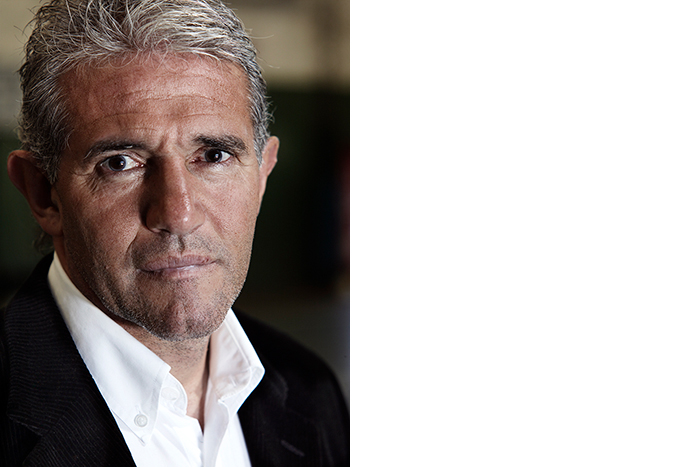 Q: Did that change after researching the book?

“Yes, like most people I would have said Carlos Alberto in 1970.

“I think Burruchaga’s because it’s such a riveting last 20 minutes of the final, but also because of how both Burruchaga and Tata Brown spoke of Maradona’s genius in making the pass that set up the goal.

Q: You say in the intro you were asked to leave the Mangiunhos favela in Rio at gunpoint. Explain more!

“Wherever we went in the world we would hire a local production company with a producer/translator and fixer.

“In Brazil they always supplied security in the form of an off-duty special forces policeman in plain clothes. I never felt we needed them, but I think it was for everyone’s piece of mind. And actually we never did need them.

“However, when you went into the favelas things were different. The favelas were policed by the drug lords. There was a concrete ring around them with police cars dotted around the ring. The point of the police car was simply to let you know that if you went beyond that point you were on your own, the police had no jurisdiction.

“We shot Jairzinho in the Manguinhos favella, known locally as the ‘Gaza Strip’ because he had a charity there. We couldn’t bring our own security because they would probably be killed but more importantly it would be insulting to the ganglords in the favela. 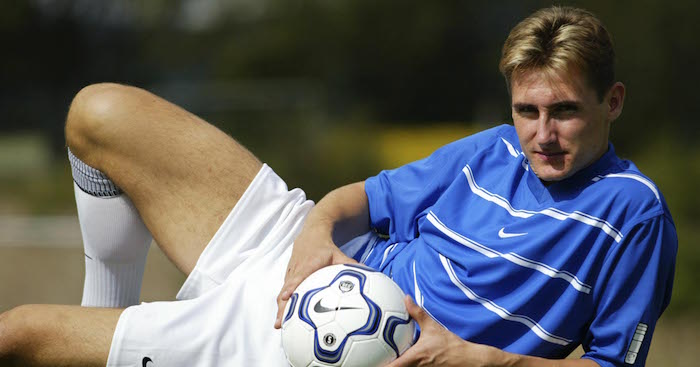 QUIZ: Can you name the top scorer at every World Cup since 1966?

“So we hired the ganglords’ own security. We were told we had to be gone by 5pm. I had wanted to shoot Jairzinho with a beautiful old table football table out in the street.

“At 4pm our ‘security’ got a bit bored and cleared off, leaving us in the street. Normally when you are shooting anyone you keep going until you think they have had enough. We were a crew of five and everyone was standing behind me apart from Jairzinho.

“Through the lens I saw a guy on a motorbike snaking his way down the street towards us. He stopped behind me and I could hear him talking to our Brazilian producer, Gretha, in Portuguese, which I couldn’t understand.

“I ignored her and kept shooting for probably another five minutes. When I turned around all of the crew except Gretha had disappeared. It was only when we got back in our van that Gretha told me the guy on the motorbike had pulled a gun on her and told us all to leave. It was brave of her to let me keep shooting and not tell me til later what had happened.”

Q: Will you update the book after Russia 2018? If so, how likely is that you might be interviewing Harry Kane?!

“I have been involved in discussions about continuing it. I was lucky with the last two World Cups in that both times there was only one goal scored and by Europeans. If Brazil beat Argentina 5-4 in the final it would be a nightmare, but we’ll see.

Harry Kane…?! I’m afraid he has as much chance of scoring in the final as me, and I’m Northern Irish!!”