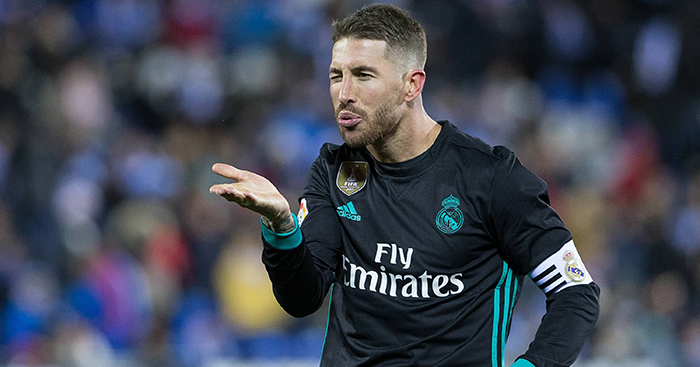 Unless you support Real Madrid, you probably haven’t got much time for Sergio Ramos. In fact, you probably can’t stand him. He’s football’s ultimate bastard.

Bending the rules. Underhandedness. The dark arts. Whatever you call it, it’s often the bad rather than the beautiful that clinches victory — in football and probably everything else.

As a neutral, this can be frustrating. When all you want to see is a good match, the sight of kicking, diving, play-acting, hands of God and imaginary cards are bad things. To be a victim of the dark arts is even worse.

When the villain is on your side, however, the situation changes. Sometimes even the most mild-mannered fans want blood, revenge, a win-at-all-costs mentality. Sometimes all they want is a bastard — their bastard — to drag them over the line.

But how to define that role for a player? Cheating is far from a one-dimensional thing: there are as many ways to cheat as there are to score a goal, and footballing villains who carry out the dark arts come in different shapes and sizes.

I won’t attempt a conclusive taxonomy of cheaters here, but I would argue for there being two broad types: the rough and the crafty. The foulers and the divers, in other words. The Joneses and the Fabregi. The Wimbledons and the Barcelonas.

These roles are usually exclusive.

Very occasionally, however, a player will come along capable of performing both roles, combining wayward studs with a wayward moral compass — a monster just as likely to kick you as they are to feign being kicked by you.

And on a completely unrelated note: happy birthday, Sergio Ramos.

But that’s beside the point.

Sergio Ramos is very good at what he does: defending, winning, scoring a surprising number of goals and, yes, quite often cheating. And Ramos is much better than your average cheat — he’s one of those special hybrid cheats that can do it all.

This might make Ramos twice as dislikable, but it also makes him near-peerless. Because while defenders making two-footed challenges are commonplace, and while any number of flimsy wingers will throw themselves down to earn a free kick, few players are skilled in both practices.

Moreover, the combination of those two traits makes each more powerful. Your five-foot Barcelona midfielders can dive and harangue the referee as much as they want, but they run the constant risk of being snapped in half.

Ramos, on the other hand, can exercise all the unsportsmanlike tricks in the book, knowing he could handle himself against most opponents.

If fouls are offensive and dives defensive, then Ramos is the complete package: one of football’s only box-to-box cheaters.

It’s no surprise that a footballer being good at two things, however shitty those things, can make that footballer pretty valuable.

And for Spain and Real Madrid, Ramos is virtually irreplaceable.

But while players in the Ramos mould are certainly a rare commodity, the Spaniard isn’t totally unique.

In fact, the World Cup-winning side before Spain in 2010 had a kind of proto-Ramos — a player much worse at football, but one with that same willingness to exercise both combative and tactical dirtiness.

But Materazzi offered that same one-two punch that Ramos does, and it came in handy when it mattered most.

The Italian had all the underhand devilry of a Luis Suarez but in a very large, very tattooed casing. His roguishness provoked Zidane; his 6’4 frame meant the Frenchman could never actually hurt him.

Another Ramos-type player could often be found right next to Ramos at Madrid, in the form of Pepe. Their partnership, all shin-high tackles and devious schemes, showed that two wrongs sometimes make a right.

In the Spanish national side, however, having two bastards might not be necessary. It might not even be possible.

Diego Costa might be one of the game’s most underrated forwards — an unstoppable goalscorer with the ability to rile even the most stoic of defences — yet his role for Spain has long been undefined.

The 2014 World Cup was meant to be his grand entrance to the international scene, but that ended in an embarrassing group-stage exit, and the striker has since been in and out of the side.

When Alvaro Morata is fit and playing regularly, it seems like the current Chelsea forward might just edge the former one.

But why? Costa’s scoring record is better than Morata’s, and the Atletico forward brings an edge like virtually nobody else in the side.

Except Ramos, that is.

It’s that similarity, that mirrored devilry between Ramos and Costa, that might just prevent the striker from ever being one of Spain’s key players.

A Mourinho-helmed Madrid side might have required a multitude of cheaters, but the Spanish national side, long-time purveyors of ‘beautiful’ football, may not be so accommodating.

Ramos is the ultimate wildcard. An unpredictable tough guy, an absolute weasel and sometimes a handy goalscorer.

Costa? Similar, but without 150+ caps and the begrudging respect of world football.

For the time being, Ramos is the only anti-hero Spain needs. He might be the only one they ever need.