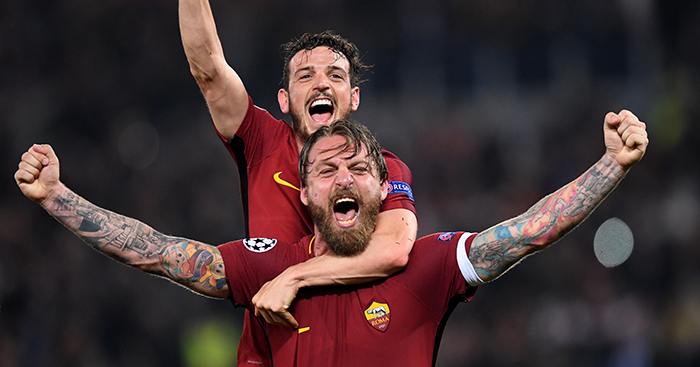 If Roy Keane and Patrick Vieira taught us anything, it’s that footballers don’t need a pre-existing connection to a city to leave a lasting influence on a club.

For years on end, the pair became emblematic of the rivalry between Manchester United and Arsenal, coming to symbolise the respective characters of their clubs through an instant understanding of what was required of them.

Sometimes, though, that learning is required a little less – Daniele de Rossi was born in Rome and joined his hometown club aged 12, and has never stopped playing as if taking his first opportunity to represent the club he loves.

“For me, it is the normal thing to play right here,” De Rossi told the New York Times in 2012.

“I never tried, or really wanted, to play outside for another team. I think some players who come here feel so much pressure. I’m accustomed to feeling this pressure. You grow up feeling it, even when you’re a simple fan. It’s just something you live with.”

On the surface, there can be a temptation to reduce De Rossi’s game to anger and ferocity. However, when you strip back the snarling exterior, you have a player whose game has never stopped being about doing a duty to his hometown and to himself.

Determination manifests itself in football in many ways, but it doesn’t always have to be driving runs or last-ditch tackles.

Heroism can feel like something which might only exist at the extremes of sporting behaviour, but for De Rossi it has come through conversations with younger team-mates and moments of flair and genius amid all the blood and guts.

His goal against Juventus in 2009 demonstrates that single-mindedness, the willingness to let others take the lead from his deeper-lying position, but to take it upon himself to do it all when required.

It’s rare for anyone to catch Gianluigi Buffon off-guard, but to do so from this range, with this accuracy, is as close as you’ll get to a football unicorn.

Buffon’s expression is almost one of anger as much as bafflement, his arm raised in protest at such a goal even being possible. He’s trying to come to terms with not being in control of the situation, and this says as much about De Rossi as it does about him.

From De Rossi’s point of view, it’s not a case of taking the lead out of frustration at team-mates’ inaction, but rather it’s seeing an opening and taking it simply because he’s determined he’s the only one who can see it; it’s a self-confidence born out of knowing his own importance and responsibilities.

While it will always be frustrating to waste great goals on defeats, De Rossi’s only goal against English opposition remains emblematic of what he’s capable of both mentally and physically.

With a 6-0 deficit, there can be a tendency to ease off and wallow before full-time, perhaps going into challenges with a little less venom or saving more extravagant attempts on goal for when they really matter.

De Rossi, though, has rarely, if ever, shown himself to have anything resembling an off-switch, and the defeat at Old Trafford was no exception.

One might look at him pulling off such a technically difficult move and decide it was made easier by the lack of situational pressure, but another way of looking at it is to acknowledge a refusal to accept defeat – something which we saw once more with De Rossi with his role in Roma’s comeback-for-the-ages against Barcelona in the 2017-18 Champions League.

With Francesco Totti finally hanging up his boots in 2017, De Rossi’s role as the talisman of the old guard became even more defined, and his own eventual retirement will be felt just as keenly.

There have been times at which he could have been prised away, but since taking the captain’s armband he has risen to the occasion, not least in that Barcelona game.

Three-goal comebacks are something Barcelona do to you, not the other way around, and for once we saw a small amount of tension in De Rossi as he stepped up to take the penalty which would bring that three from the start of the day down to just one with half an hour to play.

As a player of his age, there’s always a realisation that each big opportunity could be your last, and the spot-kick, if not weak, was a little uncertain.

Its importance was clear, though, with the release of what felt like more than a decade of emotion – it was arguably his biggest moment since scoring from the spot in the 2006 World Cup final and, like then, his achievement would count for little without others helping him finish the job.

Football was a very different game when De Rossi began his career, and his high-intensity game suggests he might not have too much longer at the top level once his current Roma deal ends in 2019. Before then, he’ll no doubt be involved in another derby with Lazio, whose fierce rivalry with Lazio has been entertainingly documented in Betway’s Story of Derby della Capitale.

His Roma debut saw him share a pitch with 1994 World Cup veterans Aldair and Cafu, whose victory over Italy in Pasadena seems a lifetime away, and his comments about football’s generation game go some way to explaining his own achievements.

“[The younger generation are]18 years old and in 20 years’ time they will find themselves complaining about the youth of today.’”

This mentality comes through in De Rossi’s game as much in 2018 as it did at the start of the century, only he has moved from one end of the scale to another.

To begin with it was a case of showing the older and more experienced players he had something to add, whereas now it’s about showing those younger than him that his age remains no burden to what he can bring the team.

Throughout his career, De Rossi has left nothing on the pitch, and those times he has failed have been those times when everything wasn’t enough.