A tribute to David Villa, a man who never arrived too late nor too early 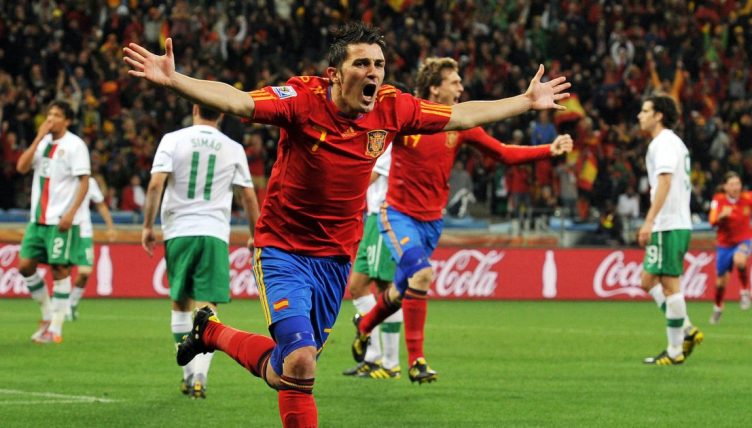 Andres Iniesta’s 2010 World Cup-winning goal will live forever in the memories of Spain fans, but they might not have even got close to the final without a brilliant piece of improvisation from David Villa.

Vicente del Bosque’s team had lost their tournament opener to Switzerland, and for a time it looked like they might go the same way as the 2006 squad, failing to make the most of a talented group of players capable of brilliance.

The meeting with Chile in the final group game looked like a must-win – the Swiss couldn’t be relied upon to drop points against a Honduras side without a point or a goal from their first two fixtures, and Chile knew they would avoid a tricky last-16 meeting with Brazil if they could avoid defeat.

After a tense 20 minutes, however, Villa made the first of three huge goalscoring contributions which defined his international career.

Sergio Busquets played a near-perfect ball through to Fernando Torres, but Claudio Bravo read the midfielder’s intentions and raced from goal to beat Torres to the ball. That should have been the end of it and, in many circumstances, would have been.

But Villa was ready to pounce. Like a tennis player noticing his opponent has put all his weight to one side of his body, Villa recognised he could move the ball onto his right foot and attempt to beat a retreating defender with an inch-perfect delivery, or he could go first-time with his wrong foot, but with a bigger target.

Villa scored, Iniesta added a second before half-time, and Spain topped the group and one-nilled their way to the trophy.

The pressure on Villa in 2010 was perhaps greater than any other forward at the tournament.

Eleven members of Del Bosque’s squad played their club football for either Barcelona or Real Madrid, a further eleven played for other clubs, but Villa was the man in the middle, providing a uniquely exact balance.

He had spent the previous season at Valencia, scoring 21 goals in La Liga, but had already agreed a move to Barca and would link up with the Catalan club after the tournament in South Africa.

Along with the pressure which would accompany his move – both via the hefty fee and the responsibility to succeed where Zlatan Ibrahimovic had failed the season prior – there was an onus to show he wasn’t going to take his foot off the gas after securing the big move.

Villa’s tally of seven goals in qualifying was more than double the total of any other Spanish player, and two of those goals were crucial winners against Bosnia and Belgium.

Spain were solid defensively, but past incarnations of La Roja had suffered from forwards failing to deliver, be it the unfortunate Fernando Morientes against South Korea in 2002 or Raul and his penalty miss against France two years later.

This Spain had something the older generation did not, however: a trophy to their name, thanks in no small part to Villa himself.

Like a reverse Zoolander, much of Villa’s best and most important work in 2010 saw him coming in from the left. His role might have been as a Fernando Torres support act in theory, but in practice, the pair almost acted as each other’s decoy.

His knockout winners against Portugal and Paraguay both came from the left of the box as if he’d found a patch of shade unaffected by the otherwise microscopic attentions of opposing defenders, while his run to win a penalty against the South Americans also came from the same side.

The best of his five goals in 2010 also came from out wide, though that one was all his own work.

When Villa collected the ball deep against Honduras in their second group game, Spain were yet to score in nearly two hours of World Cup football. Villa approached the looming stat as a challenge, not an inevitability, showing the intensity of a man used to leading Valencia’s uphill charge against Spain’s two biggest clubs.

To him, the first two defenders were Madrid’s Zidanes y Pavones. The third was Barcelona’s La Masia. Goalkeeper Noel Valladares was the spending power of the clubs while Valencia hovered between Champions League and UEFA Cup football.

He knew it was difficult, but his ability to carry Los Che to the Champions League knockout stages and himself to Camp Nou showed it was far from impossible.

In the end, we’ll never know quite what Villa was capable of at Barcelona, though we got a damned good glimpse in his debut season.

A broken leg in February 2011 ended his second campaign early, and when he returned, the man who brought him to Catalunya, Pep Guardiola, was no longer at the club.

Still, if Villa’s first 18 months at the club are anything to go by, it’s a travesty the injury came at the time it did.

He may have been a great finisher and dribbler, but his time at Barcelona showed another talent where he had few peers: waiting.

It’s something we saw with Spain, as he developed a knack for creating space for himself in those moments even viewers took their eye off him, and it can’t be overstated how hard it is to become invisible when everyone’s eyes are on you.

Eventually opponents might give him a wider berth, ensuring they could at least see him at all times, at which point he would remind them that just because Thierry Henry was no longer a Barcelona player didn’t mean they were done scoring Thierry Henry goals.

While there may be a little regret about Villa’s later career, he was able to earn the Champions League title he deserved, not just lifting the trophy but doing so after scoring a goal worthy of clinching victory in any game.

The 2011 victory over Manchester United is best known for the front three of Messi, Villa and Pedro sharing the goals and midfield trio Xavi, Iniesta and Busquets notching an assist each.

However, Busquets’ pass for Villa’s goal would not have been possible without the vision and, most importantly, patience of the latter.

Just as his goal against Chile required immediate action, he was instantly aware that, while others might have felt a one-touch finish was required against United, this time he could wait to get it right.

It’s the sort of goal you struggle to come back from, mentally. It’s Villa telling Edwin van der Sar exactly where the ball is going and even giving him a second to set himself, only to still find the net.

Villa’s career has drawn to a close, with some impressive seasons in New York showcasing the ability of a man who has never lost his appetite for scoring goals.

A World Cup title and Champions League trophy represents more than most players will get their hands on in their entire career, yet it still feels as though he deserved more.