Adam Le Fondre: ‘I was turning offers down for weeks to play for Neil Lennon’ 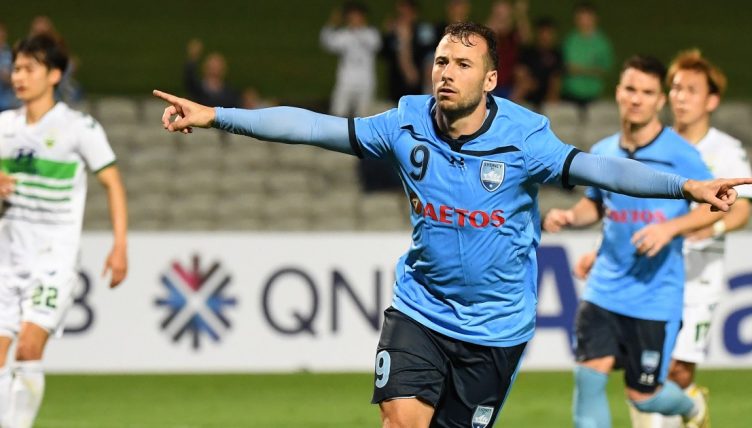 Up, from League Two to the Premier League; down, from the joy of promotion to the despair of relegation; far and wide, from the North West to the South East of England and back again via Wales; then, more recently, to Australia and India, where he has won three top-tier titles in as many years.

He has rarely sat still. He doesn’t seem the type.

Yet as we talk, Le Fondre is stuck, waiting. He wants to return to Australia, where he signed a two-and-half-year contract extension with Sydney FC in April. It will see him play until he’s at least 36 and attempt to surpass 300 career goals, a subject we will come to later. But for now, he’s in the limbo brought on by Covid-related travel restrictions, so it seems a good moment to pause and reflect on the journey that’s brought him here. It’s been eventful.

Le Fondre is from Stockport, and he began playing for the youth teams of local club Stockport County. He stood out, too. From 13 to 16, he would score “30, 40 goals a season.” Naturally, attention came. “I had a lot of clubs chasing me to try and sign me to a Premiership team,” he says.

Yet he ignored the advances: “I wanted to get into a first team as quick as possible.” Staying at Stockport gave him that chance. Before his 18th birthday, there he was, a boy against men in the lower leagues of the mid-noughties.

“I wanted to cut my teeth at a lower level and try to springboard from there,” Le Fondre says. “I probably played a little bit longer than I wanted to in League Two, but I wouldn’t trade my journey for anything. It was not the beautiful football you see in the Premier League, you’re playing with a bit of blood and thunder… You sink or swim. Luckily for me, I swam.”

Le Fondre spent six seasons in the fourth tier; two each with Stockport, Rochdale and Rotherham. In the sixth, he was the division’s top-scorer, earning a move to Reading.

He found a group with “great togetherness” under manager Brian McDermott that would achieve an improbable feat, beating out Southampton and West Ham to the Championship title. Le Fondre was the club’s top scorer with 12 goals but he points to the January signing of fellow striker Jason Roberts in January as the critical juncture.

“In that six months to the end of the season, [Roberts] was unplayable,” Le Fondre says, “I don’t think I’ve ever seen anything like it, where a striker could just absolutely abuse defenders like he did. He was the perfect catalyst… a big personality but a really good pro. That’s what we had, a group of great pros who knew what was needed to win.”

“People weren’t really believing in us. Southampton and West Ham were the big clubs and it was like, ‘Little old Reading at the top, they’re surely going to falter.’ We just didn’t. We just carried on carrying on and steamrolled through the rest of that season.”

It culminated with a game at Southampton which effectively sealed the title. Le Fondre scored twice in the second half. “It was amazing, the atmosphere. That’s probably my favourite game I’ve played in my career.”

It also gave him the opportunity to play Premier League football. Again, Le Fondre scored a club high 12 goals, five of which came in January, earning him a Player of the Month award.

Yet it was not enough to stave off relegation, so are Le Fondre’s memories of his solitary Premier League campaign bitter or sweet? “It’s both. [It’s a] personal joy to play in the Premier League. I’m in League Two playing against Barnet, then fast forward 12 months, I’m scoring against Stoke in the 90th minute in the first game in the Prem.

“I love what I did in the Premier League, it’s just unfortunate we didn’t stay up, which is partly my fault because obviously I didn’t score enough. I would trade all my goals in if it meant we stayed up.”

Though he feels responsible for Reading’s relegation, Le Fondre also believes he was good enough to stay at the top level – his ability to sniff out chances, he says, is just as applicable in the Premier League as it is in League Two – but the opportunity did not come.

A tough spell at Cardiff followed, but Le Fondre was given an escape route by Bolton manager Neil Lennon in January 2015: “He fed my ego to the point where there was nowhere else I was going to go [on loan]. He was saying I was a godsend for him.”

Le Fondre started scoring again and, he says, “The fans really took to me and it helped me resurrect myself out of the doldrums of not really enjoying football at Cardiff to really enjoying it again at Bolton.”

Come the end of the season, he was desperate to stay, waiting five weeks for an offer. “I was turning down teams left, right and centre just to go back and play for Neil Lennon. I felt like if I’d played for Bolton that season, I’d have reaffirmed myself as what I was and what I think of myself as; a 20-goal-a-season striker in the Championship.”

Bolton’s financial issues put paid to that but after two more loans at Wolves and Wigan, he did eventually make it back to the club in January 2017 on another half-season loan. By that time Lennon had gone and Bolton were in League One. But, under Phil Parkinson, they were pushing for promotion.

“It looked as if the club were getting out of the dire straits they were in,” Le Fondre recalls. “I left Wigan early to come back to Bolton and I gave up a lot salary-wise to do that because I looked at the squad and, especially adding myself to that squad, I felt like we were a shoo-in to get promoted.”

He was right. Yet the return to the Championship would not be easy. Le Fondre spent much of the campaign on the bench as Bolton struggled. Going into the last game against Nottingham Forest, they had taken a point from the last 21 available and were 23rd. Bolton needed to win and hope other results went their way for a chance of survival.

Yet Parkinson left Le Fondre, his top scorer, on the bench again. The first half ended 0-0. “I’d scored the majority of our goals coming into the end of the season and I felt like I was the person who should start,” he says.

After an hour, Parkinson finally threw caution to the wind. Le Fondre went on and the game exploded into life. He scored seven minutes later, but Forest got two in quick succession. Bolton looked doomed.

Then, in the 86th and 88th minutes, Le Fondre popped up twice more. Not to score, but to set up David Wheater then Aaron Wilbraham for the equaliser and winner. “I can’t really grumble with the impact I made,” he says, understatedly. “My family were there: my wife, my kids, my mum and dad, watching. It was a great day.”

It was also his last meaningful contribution for Bolton.

During his last full season at the club, the club was already experiencing some financial issues. But, he says, they didn’t affect performances: “It sounds crass, but if you’re getting paid on time, you don’t really ask the questions.”

Yet in the summer of 2018, the Bolton players refused to play a friendly against St Mirren after bonuses and salaries they went unpaid by owner Ken Anderson. “We had to challenge the chairman,” Le Fondre says. “There was a lot of miscommunication at that time. As a player, there’s nothing worse than being miscommunicated to, and it led us into a bad situation.”

He departed before the nadir, but he adds: “When I left, they weren’t getting paid for five to six weeks… It’s their livelihood, people have got mortgages to pay, got families to feed.

“This doesn’t sound great, but I got out at the right time when that sort of calamity came down on the club that season.”

Still, he says his decision to leave was more based on game time than finance. “I’m not about sitting around collecting money. I want to play games, score goals.”

After starting the next season on the bench, that desire to play led him all the way to Sydney. “I’m quite glad it did really, because I’ve had great success going abroad, and I’ve loved my time abroad as well. I knew if I played games, I’d score goals. They provided the games and I did the rest really.”

He’s not joking. In his 75 Sydney FC appearances, he’s scored 49 times. “I was the fastest player to 10 goals in A-League history. [The first season] culminated with the A-League final as well and we won that.”

They repeated the feat the following term, before Covid put Australian sport on hold. While it was, Sydney allowed Le Fondre to leave on loan. In another twist, the lifelong Manchester United fan ended up at the City Football Group’s Indian subsidiary in Mumbai.

But, he says, “One of the main reasons I picked Mumbai City is because the City Group was behind them. I knew everything would be done right, I knew they’d have a top coach who wanted to play good football and I knew the facilities would be some of the best. I knew we’d have a great chance, and we created history, we won both trophies.”

Another opportunity for silverware followed on his return to Australia, but this time it slipped through his fingers. In the A-League Grand Final, Sydney FC faced Melbourne City – another City Group outfit and the same side they had beaten a year before. This time, they lost after having a man sent off in the first half.

“The referee decided he wanted to be the star of the show,” Le Fondre says. But, he adds: “It gives us more determination to come back again [this season] and really stamp our authority on the A-League and on Melbourne.”

That might not be the end, though: “There’s a lot of life left in me as well. I don’t feel like I’m going to retire after these two years, the way my body’s feeling.”

Given how his career has progressed up until now, you wouldn’t rule out a dramatic finale. Where? We’ll have to wait and see.