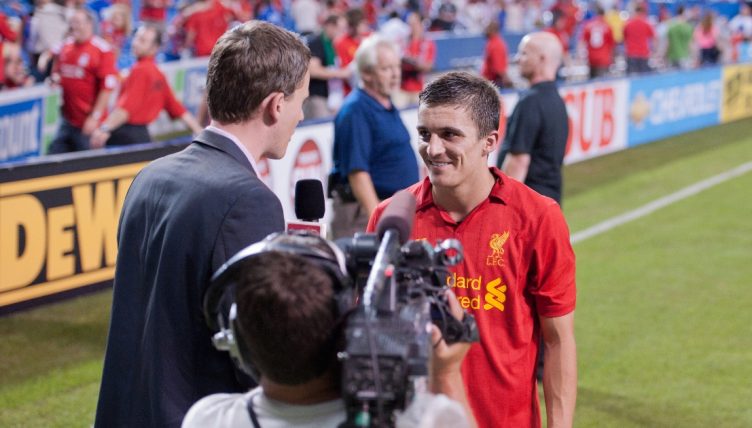 Many young footballers find it hard to cope when they are let go by their clubs, but for Adam Morgan, the blow was even more severe when his childhood team Liverpool told him he had no future at Anfield.

Morgan, a born-and-bred Scouser, had been labelled the best finisher at the club by Liverpool legend Robbie Fowler and also scored the first goal of Brendan Rodgers’ Anfield tenure when he netted in a pre-season friendly against Toronto FC in July 2012.

Ten years on, however, and Morgan is plying his trade in with Haringey Borough in the Isthmian League Premier Division, having turned out for a myriad of teams across the English league pyramid.

Those intervening years have been extremely tough on a personal basis, with Morgan suffering from severe anxiety and depression.

It was only around two years ago, when this interview was first published, that he decided to open up about his mental health issues, as well as being able to talk about his time at beloved Liverpool, who he joined when he was eight years old.

For a while after Morgan left Liverpool, he couldn’t even bear to watch them play, such was his heartbreak at being let go.

“I was angry and upset. Feeling like a failure was a hard thing to get over, but I thought of myself as a big, strong boy who didn’t need any help,” says Morgan.

“That took me to a dark, dark place, and I still go back there from time to time, but I know how to deal with it better because I see a counsellor. Sometimes, I’ll slip up, which can be self-inflicted.

“I put out a tweet the other day, writing about how I hid my emotional pain and explaining that anyone can suffer from poor mental health. I also wanted to let people know that they could speak to me if they were also suffering.

“It’s about that snowball effect, and I just want to try and help people as much as I can.”

Things are very hard to understand sometimes about yourself & speaking from personal experience also knowing a lot of people who have & do suffer from mental health an not understanding the things they are feeling is the most difficult part.. i want to help like I been helped ⚽️

A diehard Liverpool supporter, his father, Shaun, followed the side home and away, so it was a dream came true when Morgan was recruited by Liverpool’s academy.

Morgan grew up idolising Fowler, Steven Gerrard, Jamie Carragher and Michael Owen and went on to garner attention due to his goalscoring exploits for Liverpool’s Under-18s, netting 18 in 16 games during the 2010-2011 FA Premier Academy League season.

It was that kind of form which elevated him to the reserve team, for whom he scored 17 times the following campaign, leading to him being taken on the first team’s pre-season tour of North America in the summer of 2012.

“I had been training with the first-team squad because a lot of the boys hadn’t yet returned after taking part in the European Championships,” says Morgan, who had played for England at the Under-17s World Cup in Mexico a year earlier.

“To be honest, I just thought I was there to make the numbers up, but I did well. A few days later I was sick and wasn’t going to go into training, which was rare for me as I had missed training maybe twice in my whole life, but one of the lads text me to say I had been chosen to go on the pre-season tour.

‘We were both crying our eyes out’

Morgan admits it took him six months to get over his nerves about training and playing alongside his heroes, especially club captain Gerrard.

“They could not have been more welcoming, though,” Morgan says, “and when Gerrard used to say hello to me in the morning it would make my whole day.”

Unfortunately, Morgan’s dad could not make it on the pre-season tour, which featured in the Channel 5 documentary series Being Liverpool – or so he thought.

“My mum and dad are working-class people, so they could not afford to go to America,” Morgan says. “Unbeknown to me, someone paid for him to go, so I am sitting in my hotel room and Robbie [Fowler] phones me and says to come down to reception because he wants a word with me.

“I go down and am standing there when I see my dad. We were both crying our eyes out.”

The game against Toronto may only have been a friendly, but for Morgan to score for his boyhood club meant everything

“It felt like an out-of-body experience and like I had scored in a World Cup final,” he says. “I remember Jamie Carragher came running down the touchline with me after I had scored and giving me a big hug.

“The hairs on the back of my neck still stand up when I think about it. My dad was in tears in the stand and I think it meant just as much to him as it did to me.”

Four weeks later he made his competitive debut, coming off the bench for Fabio Borini in a Europa League game against Scottish club Hearts.

But it was the return leg a week later when he was handed his first start, lining up alongside such luminaries as Carragher, Gerrard and Luis Suarez.

He played for an hour before being replaced by close friend Raheem Sterling, but that was to be his only appearance at Anfield.

“Running out at Anfield, and then they start playing You’ll Never Walk Alone – honestly, it was the best thing that ever happened in my life. Even now, I can’t even describe it properly.”

He had to wait a few months before he next played for the first team, during a Europa League tie in Moscow against Anzhi Makhachkala, whose team included Samuel Eto’o on the night.

That proved to be Morgan’s final game in a Liverpool shirt, with Rodgers informing him he was free to leave in January 2014 following a particularly brutal training game involving defender Martin Skrtel.

The Slovakian was told by Rodgers to stay close to Morgan as the Northern Irishman doubted whether the young forward was physically ready for the Premier League.

Morgan could not stop the tears upon being told he had no future at Anfield, but looking back he has nothing but praise for Rodgers

“I wasn’t good enough to play for the first team, so it was it was time to move on,” he says. “I cannot speak highly enough of Brendan Rodgers, who is an unbelievable coach and person.

“He gave training a dimension I hadn’t seen before and he was always friendly with us young lads and knew how to treat us because he had started his coaching career in an academy.” 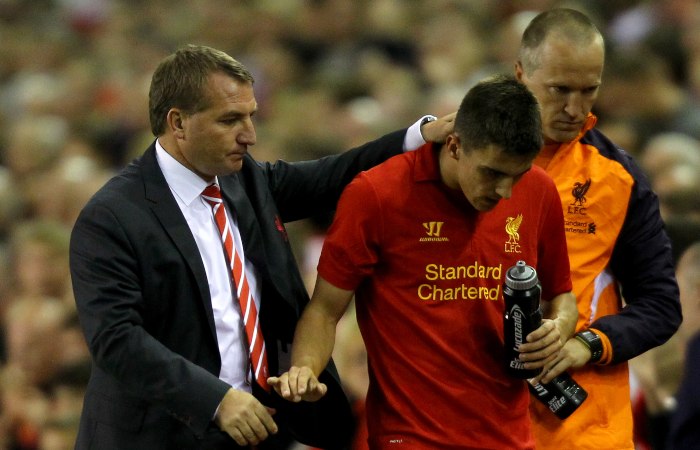 Morgan subsequently went on loan to Yeovil Town, with an agreement that the move would be made permanent and a buy-back clause inserted in the deal, but he fell out with manager Gary Johnson.

“Yeovil were bottom of the Championship and Johnson expected me to set the world alight,” Morgan says.

“He did not realise that I was living away from home for the first time, five hours away from my family, and he wanted me to hit the ground running.

“When that didn’t happen, he took a dislike to me. He made my life really hard and I used to hold a lot of bitterness towards him, but he was under pressure himself, so I’ve got to look at it from his point of view.”

Morgan departed Somerset after less than a year, heading to Scottish side St Johnstone on loan before taking in non-league clubs such as Hemel Hempstead Town, Colwyn Bay, Halifax Town and Curzon Ashton, as well as spells working for his dad’s taxi firm and as an apprentice scaffolder.

It was at Manchester-based Curzon that Morgan’s name came to public attention again after he scored a hat-trick in an FA Cup second-round 4-3 defeat against AFC Wimbledon in 2016. That led to former team-mate Gerrard mentioning him live on BBC One prior to making the third-round draw.

Made me feel a lot better this ⚽️👍😢 pic.twitter.com/bC1sv14kU9

Morgan moved to Romford FC in November 2019, having settled nearby with his Essex-raised girlfriend, Mia.

He then moved to Chelmsford City in July 2020, which came about after former Reds boss Rodgers recommended him to manager Robbie Simpson.

He has also set up his own business, Adam Morgan Elite Coaching, and harbours hopes of a return to league football.

“I believe I can still play in the Championship because I have never doubted my ability, but I am getting older and I know that there are things more important to me than football, like my girlfriend, my family and my coaching,” Morgan says.

“If I have a good season with Chelmsford, I’d be more than happy with that and if the opportunity to get back into league football comes about, then I’d assess the situation with my girlfriend.”

‘I just want to be happy’

He would eventually like to go into coaching full-time and is close friends with Anthony Barry, who left Wigan Athletic in the summer to join Chelsea as first-team coach.

“It would be the easiest thing in the world for me to say I don’t hold any bitterness, but I really don’t,” Morgan says. “I watched Conor playing for England and the only thing I thought was, ‘There’s my mate Conor.’

“Raheem is a top lad too, and we had a good friendship on and off the pitch. He has never changed and it is fantastic to see him doing so well – even if it is in a Manchester City shirt!”

The demons may sometimes rear their head from time to time, but Morgan now knows how to deal with them, as well as appreciating his time at Liverpool.

“I’ve lived my dream. If you had told the six-year-old me that I would play three first-team games for Liverpool and score as well, I would have snapped your hand off.

“I wanted more and I do have regrets, but I am proud of my achievements. I’ve played football all over the world and did what I love, but now I am at a different part of my life.

“The demons still creep in, but it is about working on that. I just want to be happy.”

This article was originally published in September 2020.