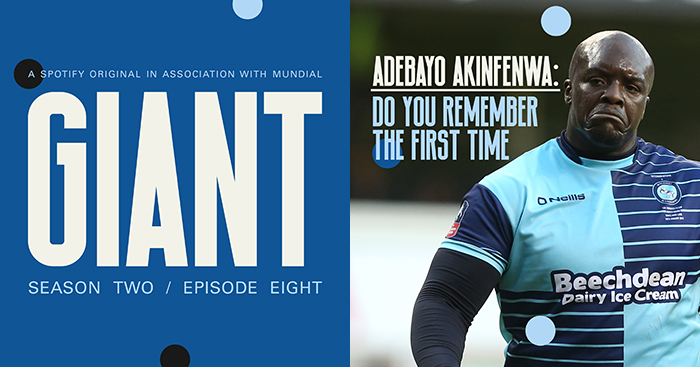 From the age of five, Adebayo Akinfenwa found he had the drive to forge himself a career as a professional footballer. It has taken him 33 years and countless knockbacks along the way to make it to the Championship, but Akinfenwa’s positivity has never erred.

Akinfenwa has earned every second of his 17-year career as a Football League cult hero – totalling over 700 appearances and over 200 goals – after refusing to be disheartened by rejection following trials at Leyton Orient, Luton Town, Leicester City and Watford.

The new episode of GIANT, the MUNDIAL-produced Spotify Originals series of audio documentaries, brings us the first installment of ‘Do You Remember The First Time?’, a series asking various personalities in the game about their burgeoning experiences in football.

Akinfenwa is the first guest and provides a fascinating listen on how he bounced back from failing to make the grade at so many clubs as a youngster.

After the last of those rejections, from Watford, Akinfenwa found himself 18 years old and without a club.

The striker’s agent at the time phoned him with news of interest from Lithuanian outfit FK Atlantas. A born-and-bred Londoner, Akinfenwa’s first question was simple: “Where is Lithuania?”

Atlantas were competing in the UEFA Cup and were offering “good money”. Akinfenwa flew out to the city of Klaipeda for two weeks. “It was beautiful,” he says,” the weather was hot. I was like, ‘This ain’t bad!’

“After three days they were like, ‘We want to sign you – three years.’ I was like, ‘Listen, I knew you were going to want to sign me anyway. Let me get back to London and we’ll discuss with my agent.’”

Rather than sign for the Atlantas, Akinfenwa planned to use interest from a club competing in Europe to earn a deal in England. The Lithuanian season didn’t start for another six months, affording Akinfenwa plenty of time to surely find an interested club.

Sadly, Akinfenwa returned to a very different country. “As soon as we flew in, there was snow everywhere. I’m like, ‘What?! Nah, they duped me! What is this?!'”

But his problems in Lithuania soon took a more sinister turn as he began to play for his new club.

“That’s when I realised the magnitude of what I’d got into. I go to challenge for a header and I hear the monkey noises. I kid you not, at the time I was thinking, ‘Nah, man. I didn’t hear that, that’s not monkey chants.’ Next thing happens, they take a throw, we clear it, I challenge, monkey noise.

There were around 1,000 fans in attendance. Both sets of supporters, home and away, were involved in the racist abuse. When he eventually left the pitch, the substitution was met with a roar from the sidelines.

“I phoned my older brother, and I can remember this conversation like it was yesterday. It was over 20 years ago. I phoned him, ‘Yo, bro, I’m coming home.”

He said, ‘I won’t ask you to stay anywhere you don’t feel comfortable. But if you leave, they win.’ I remember coming off the phone thinking, ‘Listen, they’ve won.’ This was no moment where a shining light came out. I was like, ‘Nah, I’m coming home. I’m not accepting this.’

“That night, I slept. The next morning I remember thinking, ‘Nobody is kicking me out of anywhere. Period.’ 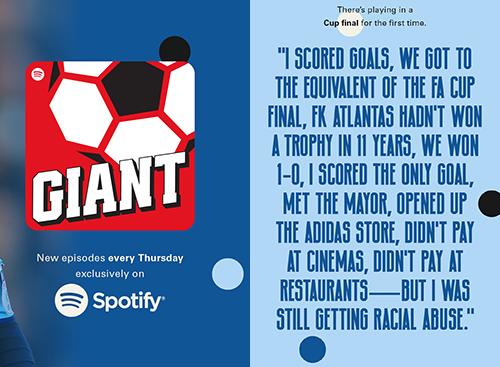 “I scored goals. We got to the equivalent of the FA Cup final. FK Atlantas hadn’t won a trophy in 11 years. We won 1-0, I scored the only goal. I met the mayor, opened up the Adidas store, didn’t pay at cinemas, didn’t pay at restaurants.

“I was still getting racial abuse from away fans, but not my own fans. The most surreal moment was when the whistle blew and all our fans run on. I’m in the midst of all my fans, jumping up and down. But they’ve got no tops on and they have got swastika tattoos on their chests, on their backs, on their arms. It’s the ultras.

“I couldn’t celebrate because it was a crowd. If anyone wants to pluck me, I’d be gone and they’d be able to walk out. It would just be me lying there. Now I’m aware, so I’m on my toes. I’m no longer celebrating, I’m just looking around. But they were excited, it wasn’t like an aggressive thing. It was pure elation for them.

“My own fans took to me, so it taught me that ignorance is massive, education is massive, and the fearfulness of his unknown was massive. That’s what I learned early. I was the first black person in the league. I learned that it was the fear of the unknown. Plus, I knew that if I could overcome that year, there was nothing I couldn’t overcome.

“As much as it was a surreal moment in life, it was a defining moment that I wouldn’t change.”

To hear more from one of English football’s most engaging and positive characters, listen to Adebayo Akinfenwa: Do You Remember The First Time now. From his relationship with Lee Trundle at Swansea City to his outlook on life as he nears the end of his career, you won’t regret it.