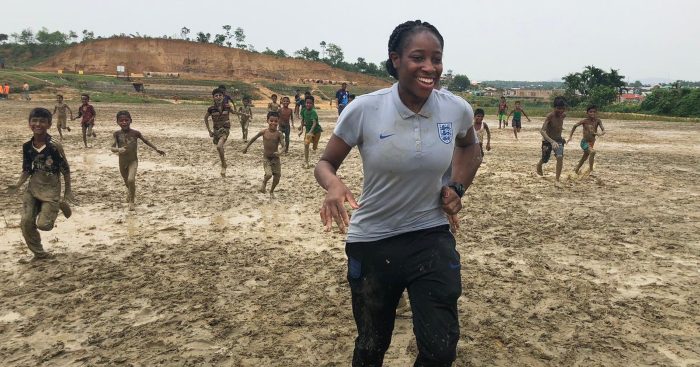 Of Jamaican heritage, the 28-year-old is passionate about creating a pathway for other BAME women who want to make their mark in football, at both playing and coaching level.

“I have ambitions to manage in the top two leagues of the women’s professional game in this country,” she says.

“It is about making an impact and helping to provide the opportunities for someone who looks like me, as well as making sure females support other females.”

The recent Women’s World Cup attracted million of viewers in Britain, with Phil Neville’s Lionesses just falling short in the semi-final against the United States, and the FA Women’s Super League is also attracting record crowds.

But Moulton is effusive in her belief that female football needs to continue to progress – and, while taking inspiration from the men’s game, to remain firmly of its own mind.

“The men’s game is quicker and more physical, with a different style which I don’t think we should aspire to be like.

“Perhaps we can look to it in terms of things like making more revenue, but we should concentrate on what we do well and maintain the talent which is in our system.”

ITS GAME DAY FOR THE GIRLS 🦁

(@Lionesses take on Argentina tonight in the @FIFAWWC) pic.twitter.com/0ts24e8wTx

Moulton was born in Derby into a football-mad family.

A Liverpool supporter from a young age, she originally practised taekwondo before football took hold.

Moulton went on to play for a number of Midlands clubs and initially only went into coaching to earn extra money while she was reading sociology and politics at Nottingham Trent University.

A UEFA B Licence holder, Moulton worked for Derby County’s Community Trust, where she completed her FA Level Two in Coaching Football, moving on to work in education for four-and-a-half years while, at the same time, volunteering at Derby’s centre of excellence.

That led to a position with the club’s Ladies Under-16s team before being accepted on to the FA’s BAME Mentee programme, which aims to redress the significant under-representation of BAME coaches at the top level of the game.

“The Mentee programme gave me a great insight into how football works, such as getting your foot in the door and networking,” Moulton says.

“I don’t think I would have had the opportunities I’ve had without it.

“With the Mentee programme, I think it will take time to see the FA’s investment paying off, but they have recognised that a lot can be gained from having diversity among coaches.”

A spell as technical director for Forest Ladies’ regional talent centre followed, during which she was approached by then-manager Graham Abercrombie to become his number two.

“Graham contacted me through Twitter and asked me if I would like to work with him,” Moulton recalls.

“I went in to see what the environment was like and from the moment I met Graham I knew I would gain a lot from working with him.”

Towards the end of last season, Moulton eplaced Abercrombie in a caretaker capacity and helped save Forest from relegation to the fourth tier of the women’s game.

She reverted back to assistant after the club appointed Andrew Cook as the new manager.

“That was disappointing because I felt like I had done a good job,” Moulton says. “Maybe I need more experience and it just isn’t my time right now.”

Look out for our next paper addressing issues of ‘race’ and gender equality in a UK coaching context. Main findings include the marginality of ‘race’ in the equalities agenda; Patterns of (in)visibility; and Whitening Equality. We call for ‘race’ conscious critiques of coaching.. https://t.co/4m758yCusv

Despite her positive experiences, Moulton has felt unwelcome at certain times in her coaching career but is unsure as to whether that is because she is a woman or due to her Afro-Caribbean background.

What she is unequivocal about, though, is the distinct lack of BAME players and coaches at the highest level of the women’s game.

Only two of England’s World Cup squad, Nikita Parris and Demi Stokes, were of mixed race.

“What needs to happen is that all of England’s teams be as representative of this country as possible,” Moulton says.

“For a young girl to be part of a club’s academy, a lot depends on her parents in terms of transport and financial support.

“Inner city girls, for example, may not have that parental support as they may come from single parent families. It means that they will not be able to have access to elite coaching and get on the pathway.”

Earlier this summer, Chelsea Women manager Emma Hayes threw her name into the hat to replace outgoing boss Maurizio Sarri in charge of the men’s team.

That never materialised, but Moulton believes there is a need for a female manager in the men’s professional game, which is already home to female physiotherapists and sports scientists.

“It is something which has to happen,” she says.

“The criteria should not be whether they are a male or female, it should be that they are the best person for the job.”

Talented and uncompromising in her beliefs, it is clear that Moulton has a huge future in professional football – whether that be in the women’s or men’s game.