Thanks to Lampard, Alex Iwobi is the turbocharged CM of Nigerian dreams 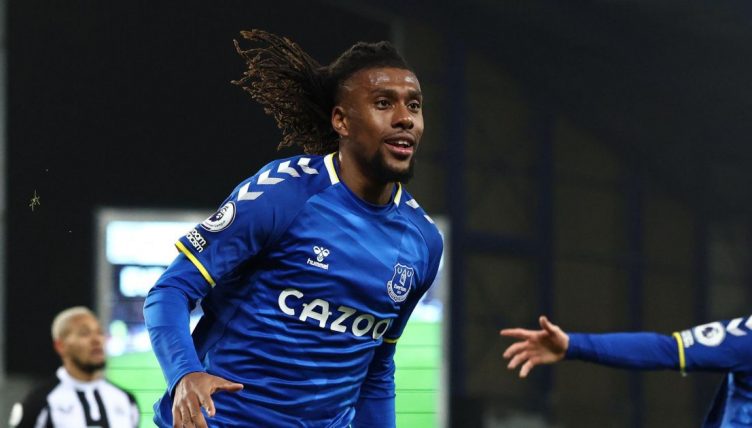 Alex Iwobi knew what was coming after receiving his marching orders in Nigeria’s Africa Cup of Nations round-of-16 defeat to Tunisia.

Only seven minutes had passed since the Everton man replaced Kelechi Iheanacho to be the link between midfield and attack and offer creativity to a side that had hitherto not fashioned a high quality chance.

The bemusement on the midfielder’s face after his red card was telling. Rather than aid a turnaround against Tunisia, who went ahead at the start of the second half, Iwobi was returning to the dressing room for an early bath with 24 minutes of normal time remaining.

The criticism of the 26-year-old was untold but probably not surprising. There is hardly ever indifference to the former Arsenal man: you either back him to the hilt or make him the lightning rod for his team’s failures.

In a sense, the aforementioned love and hate is somewhat due to the talent shown in his breakthrough years with the Gunners in Arsene Wenger’s final years, where the clever, nimble tyro enthralled the Emirates Stadium crowd.

Iwobi came close to leaving north London twice in his teens at 14 and 16. Still, the determination to prove himself meant he remained at Arsenal’s academy, eventually catching the eye in the 2014-15 season when he netted 10 times in 17 starts in the Premier League 2.

Wenger later confessed to underrating the then-teenager yet expressed his satisfaction at trusting his instincts in blocking a loan move and promoting him to the first team at the start of the 2015-16 campaign.

“When you first look at him there is nothing special there,” Wenger admitted in 2016, a year after the Super Eagle joined the main group. “He is not the kind of player who impresses you at first.”

Still 19 at the time, Iwobi proved his worth in that maiden year, making eight Premier League starts and thriving, particularly from March onwards.

A strong performance at Barcelona in the Champions League seemed to convince Wenger the youngster was ready. Despite suffering a 3-1 defeat on the night — exiting 5-1 on aggregate — the Nigerian was one of the better performers for the visiting side.

Three days after his first European start, the wide playmaker was retained in the XI for the team’s trip to Everton, rewarding Wenger’s faith by scoring his first top-flight goal for the club on his maiden start in the 2-0 success at Goodison Park.

It was Iwobi who dispossessed Ramiro Funes Mori inside Arsenal’s half and made a forward dart. The youngster was picked out by Hector Bellerin, held off the desperate Mori and coolly slotted the ball home between Joel Robles’ legs to double the away side’s advantage.

6 years ago today, the Arsenal responded to our exits from both the Champions League and FA Cup with a comfortable 2-0 victory over Everton at Goodison Park, thanks to goals from Danny Welbeck and Alex Iwobi 💪🔴pic.twitter.com/FhgkVue3hN

Seven starts followed, and the direct goal contributions continued, with Iwobi scoring another and setting up two goals in the final stretch of the campaign as Wenger’s team tussled for a league title.

A star was born.

“When you look a bit deeper, Alex is always quick connecting with other players, at a very high level and a very high pace,” Wenger explained in September 2016.

Indeed, the gamut of Iwobi’s qualities were evident in the 3-0 dismantling of Chelsea in that same month.

Whilst neither scoring nor assisting, the Nigerian delivered a strong showing even though Alexis Sanchez — who played centrally for most of the 2016-17 season, allowing Iwobi to feature more on the left — and Mesut Ozil got the plaudits.

He forced Branislav Ivanovic to play it backwards before Alexis pressed Gary Cahill and profited. He played the most vital role in Arsenal’s second. And only a huge Thibaut Courtois save from Theo Walcott denied the Nigerian an assist that would have made it 4-0.

Riyad Mahrez was voted African Player of the Year for 2016 and Iwobi was deservedly named the continent’s finest youth player.

The Nigerian finished the 2016-17 Premier League campaign with six goal involvements, just two higher than he managed in those storming couple of months at the backend of the preceding year. Perhaps, this was the origin of the Nigerian’s troubles. 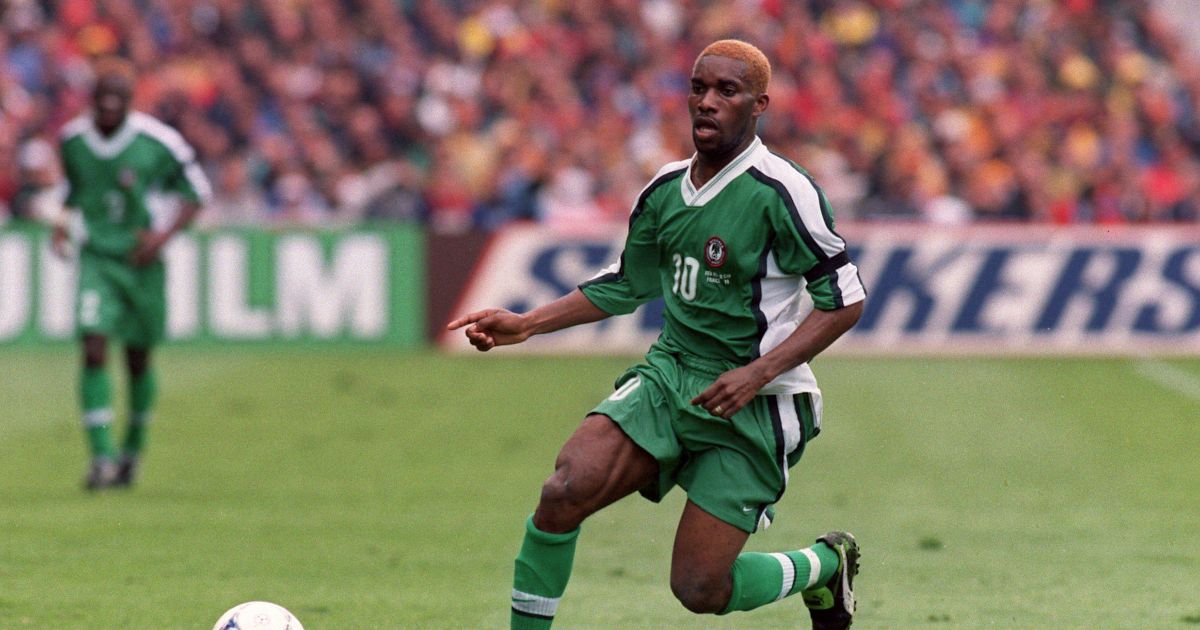 READ: The joy of Jay-Jay Okocha at France 98 & his dazzling demolition of Spain

Iwobi’s style means he could be the finest player on the pitch without managing a goal or assist. But this was not enough for Gooners who wanted more direct involvement.

The Arsenal faithful were, at times, vitriolic in Wenger’s latter years and the Super Eagle was intermittently caught in the crossfire.

Eight league goal involvements in the Frenchman’s final campaign and nine in the club’s only full season under Unai Emery did not stop the grumbling, and the attacking midfielder departed his boyhood club in August 2019, less than three months after scoring the Gunners’ consolation in the infamous 4-1 Europa League final defeat against Chelsea.

Assessing Iwobi’s initial two and a half years on Merseyside could be an arduous assignment. There have been good days but there have also been awful ones. In truth, the attacking midfielder has struggled for consistency amid the club’s muddled approach to managerial appointments and player recruitment.

He has played in wide-ranging positions and roles, even filling in at wing-back for a series of games under Carlo Ancelotti in 2020-21. Thus, it was not surprising when he aimed a veiled dig at the Italian on international duty in March 2021, stating he was pleased to finally feature in his “best position” with Nigeria.

A 1-0 defeat by Brentford in November angered supporters who felt the Bees were there for the taking before kick-off. Unsurprisingly, Iwobi was targeted after another underwhelming team performance and result.

Supporters wanted more from a player who cost the club an initial £28 million — potentially rising to £34 million in add-ons — but whose total goal involvements since summer 2019 had not matched his haul from that final year in north London.

The aforementioned loss was part of a run that saw Everton win only once in four months, eventually resulting in Benitez’s departure.

Then there was the disappointing AFCON sending-off in that round-of-16 game with Nigeria.

In hindsight, Frank Lampard’s arrival on Merseyside was probably just what the doctor ordered for Iwobi, even though it represented a gamble by the club in late January.

Lampard was the fourth head coach the Nigerian has played for in under three years at Goodison Park. All four had different tactical approaches too, further highlighting the broader issues at the club.

While results continued to oscillate between dispiriting and promising, there was a clear upswing in Iwobi’s performances. His versatility meant he featured prominently under Lampard, initially starting as a wide midfielder in a 4-4-2 before featuring as one of two midfielders either side of a defensive shield and ending the campaign at right wing-back.

The adaptable Nigerian flourished in all roles, especially in central midfield where his intelligence and awareness in the half-spaces were striking. His underrated industry was cherished by Lampard despite a costly error in the 2-1 defeat by West Ham United in April.

Everton brought in Dele Alli from Tottenham Hotspur and Donny van de Beek on loan from Manchester United in January, and both players were tipped to take minutes off Iwobi. Instead, the Nigeria international went from strength to strength, starting and completing the final 12 games of the campaign as Everton fought for their 68-year top-flight status.

His late goal in the 1-0 defeat of Newcastle United, his second of the campaign and fourth league goal for Everton, was pivotal in energising the Goodison faithful. Iwobi skipped past Dan Burn and played a swift give-and-go with Dominic Calvert-Lewin before shooting with his weaker left foot past Martin Dubravka.

The goal came in the ninth minute of stoppage time and raised the roof on Merseyside.

Often the first player to come off when the side needed something different under previous Everton managers, Iwobi became a mainstay under Lampard and thrived in the denouement of what was a back-breaking campaign.

“The most mentally challenging season of my career so far is over and I’m proud to have come out of the other side stronger, sharper, and hungrier than ever!” Iwobi wrote on Twitter after the final-day defeat at Arsenal.

Yet his season was not quite done. Nigeria’s had friendly games against Mexico and Ecuador, as well as both AFCON qualifying encounters with Sierra Leone and Sao Tome and Principe. Iwobi carried his late-season Everton form with him onto the international stage.

Under Jose Peseiro, Iwobi has not only featured in multiple roles, but he has also given a good account of himself, undoubtedly ranking as one of the team’s pacesetters after four games.

Featuring in several midfield configurations, the 26-year-old has interpreted playing in a three-man midfield or alongside either Joe Aribo or Peter Etebo commendably. In the opening half against the Leone Stars — when the Super Eagles began in a 4-4-2 — Iwobi’s industry meant his partnership with Aribo did not collapse altogether.

Peseiro corrected that gaffe at half-time, and the Everton man looked far more comfortable in a 4-3-3 after the interlude.

His goal to level proceedings, though, came in the opening half, seconds after the visitors threatened to make it 2-0 in Abuja. Iwobi recognised where the space was and timed his run to perfection before finishing smoothly into the bottom right corner.

Alex Iwobi, Victor Osimhen with the goals for Nigeria

While Peseiro kept his attacking 4-4-2 against Sao Tome, with Aribo dropped from the side, Iwobi was played alongside Etebo against the lowly-ranked nation. Unsurprisingly, the erstwhile Arsenal man flourished, especially in the opening half.

Iwobi counter-pressed to near perfection, precipitating a slew of recoveries in the Sao Tome half.

He did not score or assist, but he did not have to. His movement, aggressive ball-carrying and front-foot nature of his passing were striking.

For years, Nigerians had wanted him to morph into another version of Jay-Jay Okocha, and therein lay the problem. Iwobi may not have the flair or showiness of his uncle, but a clearer tactical understanding is evident in the 26-year-old than there ever was in the former Bolton Wanderers captain.

Advanced analytics mean Iwobi’s dearth of goals and assists have not been criticised of late with supporters recognising his know-how and tenacity. After multiple tough summers, the Nigeria international is likely to breathe easy this time before pre-season starts in July.

The goal will be consistency next term. And the in-form Everton man will back himself to keep naysayers hushed for a while yet.