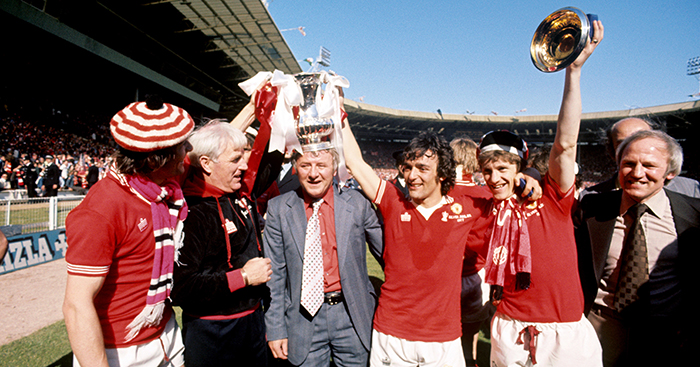 It seems unthinkable now that Manchester United could go from winning the European Cup to being relegated within six years as they did between 1968 and 1974 – but their subsequent rise back to the top was almost just as remarkable.

Stepney was in goal when United won the European Cup in 1968 and still there for their shock relegation to the Second Division in 1974 and the fightback that concluded in glorious fashion at Wembley three years later.

Promotion straight back to the First Division after a triumphant season in the second tier of the English game gave United manager Tommy Docherty a chance to build a new era at Old Trafford and their first season back in the top flight offered plenty of promise.

And while ‘plenty of promise’ these days might refer to a mid-table finish, back in 1976 it meant a third-place finish in a First Division title race won by Liverpool, with QPR finishing three points ahead of United as they started to flex their muscles once again.

“We probably did better than people expected,” Stepney says. “We were close to the top of the table all season and there was a sense that people were wary of United again. The giant had been woken and you have to give Tommy Docherty credit for that.

“Steve Coppell was one of a few great signings for us and it was a new team with a new belief that proved it was ready to compete at the top.”

The season looked set to finish on a high as United made it through to the FA Cup final against Second Division Southampton, but that opportunity slipped through their fingers.

“The FA Cup was such a big competition those days,” reflects Stepney. “It was the big event of the season and we felt we had a real chance against Southampton, but it just didn’t work out for us. They snatched a goal, we missed our chances and the moment was gone.

“Straight after the game, Docherty promised the fans that we would be back the following season to win the trophy. Some of the lads in the dressing room thought he was mad to make a promise like that, but we managed to live up to it by beating Liverpool and stopping them from completing the first Treble by an English team in 1977.

“I won the European Cup at the same stadium nine years before, but to come back from where we had been in the Second Division and to beat a top Liverpool team that went on to win the league and European Cup that season was a special achievement.” 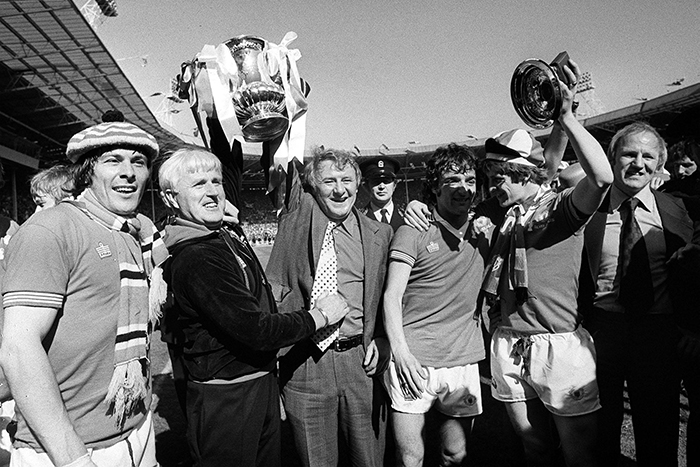 The modern game is unrecognisable from the sport we have got used to in recent years, yet Stepney insists the vast sums players collect in the modern game is not a source of frustration for the players from his era.

“The money players earn now doesn’t both me,” he continues. “We didn’t have sponsorship and TV money in my time at Manchester United and I don’t think back now and wish it was different in my day. They were different times and I’m happy to have played for a great club like United for as long as I did.

“Yes the players earn silly money these days, but that wasn’t a big issue for me. I didn’t know what Bobby Charlton or George Best was earning and I didn’t want to know. We were there to play for the greatest club in the world and whether I got paid more or less than someone else in the team didn’t bother me.

“I think it’s sad that things have changed to a point where players are distant from the fans now. We used to go out and have a pint with the fans and the media after the game every week, but that can’t happen now.

“Modern players are in a bubble, with security people around them all the time and it is not as much fun as it was for us. We would go to the London Supporters Club dinner and have a great night out with the fans every year and we loved that side of it, but times have changed and maybe not entirely for the better.”

Stepney also gave us his views on the current crisis gripping the game, as the coronavirus pandemic has brought the game to a halt.

“The way it has gone all around the world, I can’t see anything happening in sport for a long time now,” he added. “It’s a shame for Liverpool given what they did this season, but what can we do?

“You can’t give them the title because they have had a good season and if they try to play games in the current climate, I’m pretty sure the government would stop it anyway.

“I certainly don’t see any chance of sport returning up to June and July and can you really try to restart the Premier League season when the next one should be getting underway? I just don’t see how they get the season finished at this stage.”