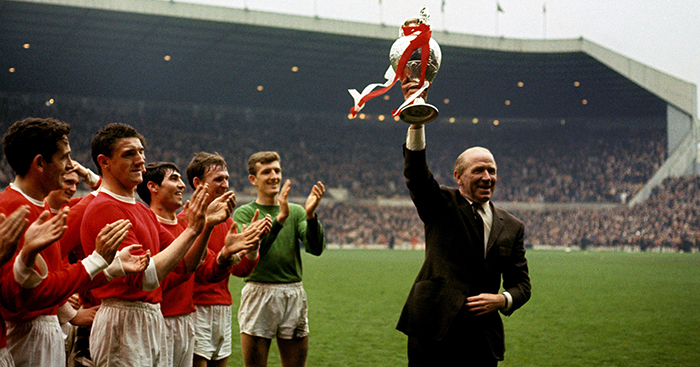 Some talented teams have proven the old adage that you’re never too good to go down in the Premier League era – but nothing can compare to the fall from grace suffered by Manchester United in 1974.

Just six years after Sir Matt Busby completed his emotional journey from the wreckage of the plane crash that took away so many of his young players by leading United to victory in the European Cup, the legendary manager looked down from the stands at Old Trafford as the club he rebuilt was relegated from the top division of English football for the first time since 1938.

Tommy Docherty was the manager who oversaw United’s relegation season, yet the colourful Scot was allowed to remain in place at Old Trafford and quickly brought the glory days back as he secured instant promotion back to the First Division and backed that up with FA Cup glory in 1977.

It is a chapter of United’s history that makes for compelling recollection, and goalkeeper Alex Stepney has taken us through each stage of a story that could never be repeated in the modern era.

Stepney was guarding the United goal when they crowned as European champions by beating Benfica in a famous Wembley final and he was also between the sticks as they were relegated and bounced back in double quick time, with his recollection of events offering a unique insight in a very different era of the game.

“I certainly saw highs and lows in my time at United and somehow, I managed to get to the end of my 12 years at the club having won the First Division title, the European Cup and the FA Cup,” Stepney tells Planet Football at a BT Sport event to promote Too Good to Go Down, the story of United’s turbulent fall from grace.

Too Good To Go Down is airing on Sunday at 9pm, to mark 45 years since United were promoted back to the First Division. pic.twitter.com/MpQCj1PHZR

“Walking into that dressing room for the first time was interesting. We had World Cup winners in Nobby Stiles and Bobby Charlton, great players like George Best and Denis Law and every one of them were established internationals.

“I had not played at senior level for England and it could have been intimidating, but it wasn’t. I was welcomed into the family that was being led by the great man Matt Busby.

“I played in all four divisions, worked my way to the top and then reached the pinnacle when I joined Manchester United and from the moment I got there, I appreciated what the club was all about.”

What Stepney and others soon realised, however, was that as big a club as Manchester United was, their success was built on the genius of Busby.

“Matt’s team talks were never long,” Stepney says. “He was the type to pop in, offer few words of advice and then let the players get on with it.

“The record he had in his time at the club proved it was a successful approach. They was no deep analysis, not great statistics like we see in the game now. It was all a lot more simple.

“This was a club used to winning, but all that changed when Matt stepped down as manager in 1970.”

In a tale that has echoes of the current era following Sir Alex Ferguson’s retirement in 2013, the departure of a long-serving manager started a slide in fortunes that was hard to halt, with the presence of Busby in a role overseeing football matters having an impact on the men who tried to fill his shoes.

“First Wilf McGuiness and then Frank O’Farrell came in as managers when Matt stepped down, but the boss was still around the club, overseeing things and having some influence,” continues Stepney.

“People said he was overshadowing the managers that followed him, but can you really tell someone who has lifted Manchester United from the depths of despair after Munich to become European champions that he has to go away?

“Maybe Wilf and Frank used it as an excuse when things went against them by claiming that having the great man still there was undermining them, but I didn’t see it that way.

“Frank O’Farrell was a decent guy, but maybe he wasn’t right for the job at the time. There was talk in the media that we were going for Jock Stein and Brian Clough and maybe they would have had the personality to carry off the job, but it was tough for Frank.

“Then Tommy Docherty came in and he instigated big changes. Players like Bobby Charlton, Denis Law and George Best were at the end of their careers and The Doc had to get them out of the side and rebuild, but it was never going to be an easy task.”

After flirting with relegation in the 1972-73 season, United were condemned to the second tier of English football a year later, with Stepney admitting the fall from grace was tough to accept.

“It was a knife in the back to get relegated, but we proved that you have no divine right to stay up,” he says. “The league table doesn’t lie and while I only let in 48 goals in 42 games, we got relegated because we only scored 38 goals. We didn’t score enough goals and if you don’t score, you go down, even if you are Manchester United.

“You can say you will bounce back and shrug it off, but it hurt, there is no doubt about that and then you have to get your head around going to grounds like York and Oxford.

“A lot of our players had never played in stadiums like that before, but I remember turning up for our first game of the season at Orient and it reminded us that Manchester United still have the biggest fan base of them all.

“There were fans everywhere trying to get into the ground and it turned out to be a great season.

“All credit to Tommy Docherty because he changed a few things around and got a great spirit back into the team and we started winning games consistently. We won the league, scored plenty of goals and went back into the First Division with a new attitude and belief.”

Part two of our exclusive chat with United legend Stepney will look at the club’s revival after their return to the First Division and he will give us his thoughts on the transformation in the game over the last few decades.

Too Good to Go Down, part of the BT sport Films series, screens at 9pm on BT Sport 2 on Sunday, April 5.