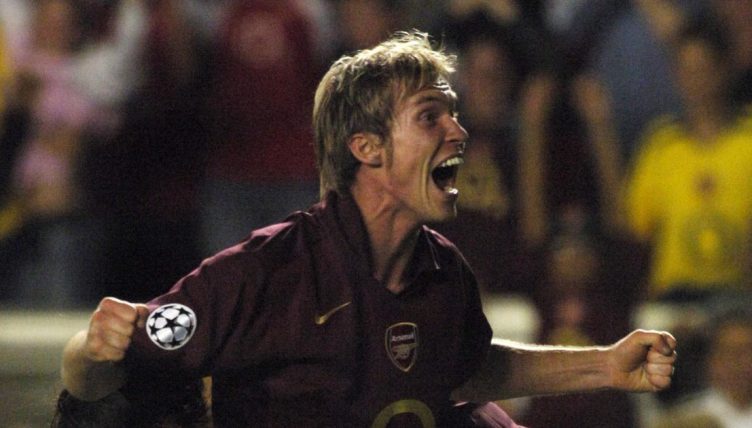 Alexander Hleb probably isn’t the first name that springs to mind when you think of the Arsenal team which made the Champions League final in 2006.

But it was Arsenal where the versatile Belarusian midfielder played the best football in his career – and eventually earned himself a £12million move to Pep Guardiola’s Barcelona in the summer of 2008.

Yet what would be a dream move for most players turned out to be an utter disaster for Hleb, who spent just one year at Barcelona before leaving loan to Stuttgart and never returning to Spain.

“It’s still difficult for me to explain why I left Arsenal,” Hleb says. “I was absolutely happy there. Arsene completely trusted me, it was idyllic. And then I decided to leave.

“I was on vacation and agents and managers convinced me that I had to go to Barcelona. To be honest, I didn’t really understand what I was doing. At some point, I realised, ‘Oh god! I’m leaving Arsenal!’

“When Arsene said that it was a matter of hours, I felt devastated. It was really hard for me to accept that. Wenger did everything to make me stay at Arsenal.

Hleb reckons he is one of many players who’ve regretted leaving Arsenal and Wenger behind over the years, but his relationship with the Gunners boss survived the transfer.

“Yes, we even met in Minsk a few months ago when Arsenal played against BATE in the Champions League,” Hleb says. “Wenger is like a father to me. It was really easy to work with him, you always felt his support.

“During my first season in England, I picked up an injury while playing for the national team. So, as I was trying to recover from it, I told Arsene that maybe it would make sense to send me on loan to Germany or something.

“He was like, ‘Stop it! I believe in you! Don’t even think about things like that.’ Honestly? I just flew out of the room. It really felt like I had wings.

“Arsene truly feels his players. He says exactly what a player needs to hear. I think there are very few guys who might say that they haven’t enjoyed working with him. Everyone felt like they would get a chance. And I think most players who left ultimately regretted it.”

Hleb moved from Stuttgart to Arsenal in 2005, a year after the Invincibles wrote their way into Premier League folklore.

It would have been hard for anyone to get into a starting XI featuring players like Thierry Henry, Robert Pires and Dennis Bergkamp, but a 24-year-old Belarusian who didn’t have any Premier League experience and couldn’t understand a word of English? Imagine that.

“When I first came to London, the first team was still on vacation because they finished the season a bit later than I did in Germany,” Hleb says. “So, during my first days at Arsenal, I was mainly surrounded by youngsters.

“Everything was great although I got really upset when I found out that Patrick Vieira was leaving. I mean, I just came there and one of the greats was already on his way out.

“Then the first team came in, but I couldn’t speak to anyone because I didn’t know English! And all the main guys spoke either English or French. The only two players I could really chat with were Jens Lehmann who obviously spoke German and Philippe Senderos who spoke six languages.

“Then the club gave me a teacher and it all worked out well, but I definitely had to train very hard because Premier League football was extremely intensive, much more intensive than it was in Bundesliga.

“We played one-touch football and you had to make a decision before you even got the ball. You need time to adapt to that. Fortunately, I had Arsene who really believed in me so after six months or so I felt completely settled and ready to go.”

Hleb went on to play 129 games for Arsenal and become an integral part of the team’s highly technical, fast-paced four-man midfield before joining Barcelona in 2008, following the steps of Thierry Henry, who had joined the Catalans a year previous.

Needless to say, Hleb was pleased to have a former team-mate around while trying to establish himself in a new team.

“In London, I mostly hung out with younger guys like Fabregas, Flamini or Rosicky. Henry was in another group with Bergkamp and Pires. But when I came to Barca, Thierry and I became real friends. I even lived at his house for a few months!

“He found out that I was living in a hotel and just said, ‘Hey, why do you need a hotel? I live alone now so come to my place!

“Thierry is an amazing guy. When it comes to football, he’s a bit more serious, a tough man. But in everyday life, he’s really fun. 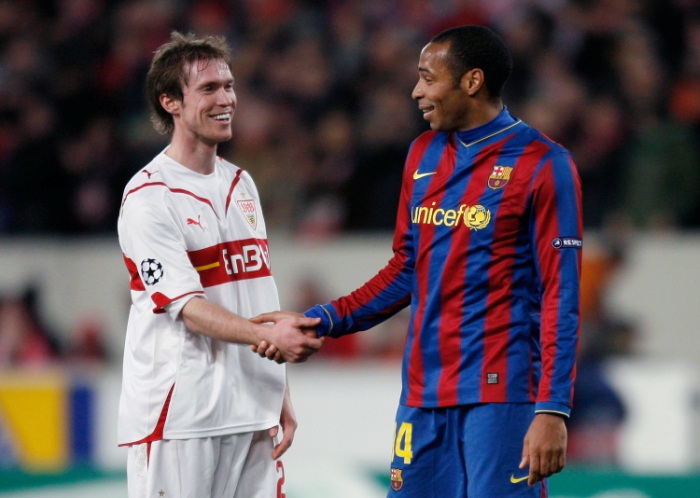 “Sometimes we would watch Arsenal matches together. When he left the club in 2007, everybody was shocked.

“The team was sort of waking up so no one saw it coming. But he wanted a new challenge, new trophies, a Champions League title. I don’t know how happy he was at Barcelona, but he won everything. That’s a fact.

“We are not really in touch now, but that’s my fault. I always lose my phone, always lose all the numbers so we have kind of lost each other, too. The only guy from the Arsenal era I still talk to is Cesc. Plus, I met up with Van Persie in Turkey. But that’s really it. We’re all family guys now, you know?”

Hleb is quick to admit he was the one to blame for failing at Barcelona. The midfielder was one of the first players signed by Pep Guardiola in his first summer as Barca manager, but that didn’t help him much.

Unlike Henry, Hleb did not learn Spanish and pretty soon found himself isolated from the rest of a team which was about to go on one of the most dominant periods in the history of football.

Eventually, as Xavi, Andres Iniesta and Sergio Busquets formed one the greatest midfield trios of all time, there was no place left for a guy who couldn’t even speak to most of his team-mates after a game. 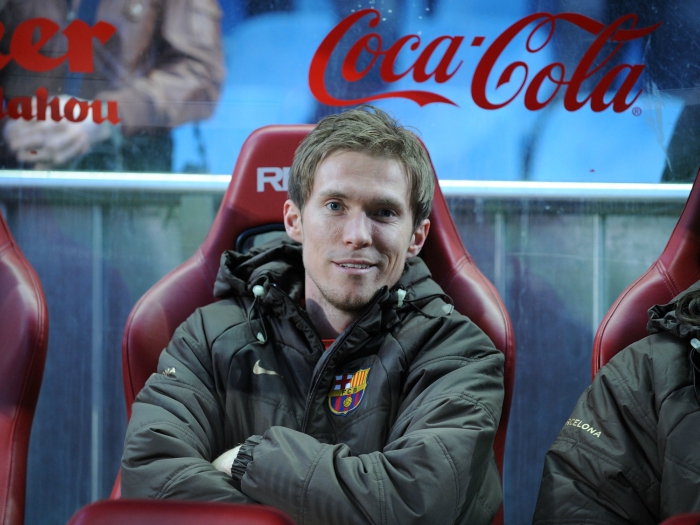 “It was all my fault,” he says. “I was nervous because of the things that were going on in my life at that time and I didn’t really listen to anyone.

“Guardiola was a young coach with no experience of managing any first teams so he probably couldn’t find the right words as quickly as Wenger. He needed that support himself.

“I remember Numancia beating us in the opening game of the season. All the players were about to join their national teams so I asked Guardiola when I had to return to Barcelona. His answer? ‘Alex, I might not even be here when you come back!’

“But he found his support. Players were behind him. Especially the Spanish guys – Puyol, Iniesta, Xavi and others.”

Falling out with Guardiola

It was an almost constant struggle for Hleb in Spain, but there was one moment in particular which stands out as the beginning of the end for him under Guardiola.

“In May, we were playing Manchester United in the Champions League final and Guardiola left me out of the squad. It was absolutely devastating. I remember talking with Henry, and he said, ‘I get it, I get it. But be stronger than this.’

“But I still felt like there was a knife in my back. I never spoke to Guardiola after that. I could understand him because I didn’t behave well enough myself. But it was incredibly painful.”

Two months after beating United in Rome to complete the club’s maiden treble, Barcelona signed Zlatan Ibrahimovic from Inter, with Samuel Eto’o moving in the opposite direction as part of the deal.

Hleb was supposed to make the move to Milan too, but he eventually returned to Stuttgart on loan instead. First, though, he got to experience the cult of Zlatan.

“In a way, Zlatan reminds me of Henry,” he says. “He was really funny, always messing with everyone. Well, except for Thierry and Messi.

“Leo was very young at that time, but even world-class players were whispering in his presence! ‘Did you see what the little guy did today?’

“I really chuckled at that. But again, we didn’t talk much because he only spoke Spanish and I knew just a couple of phrases.”

Earlier this year, Hleb who turned 36 in May, became a pundit for the Russian sports channel ‘Match TV’. He still lives in Minsk with his family and hopes to continue his football career, having left Krylya Sovetov Samara in the summer.

“It’s not about money, really,” he says. “I just want to play in an interesting league. But I won’t move anywhere without my family.

“I haven’t been to London for a while but of course I still miss Arsenal. It was great to wake up every day and do what you enjoy doing the most. It was fantastic. Obviously, I’ve got other priorities now but I still have a desire to play.”

[This article was originally published in December 2017.]