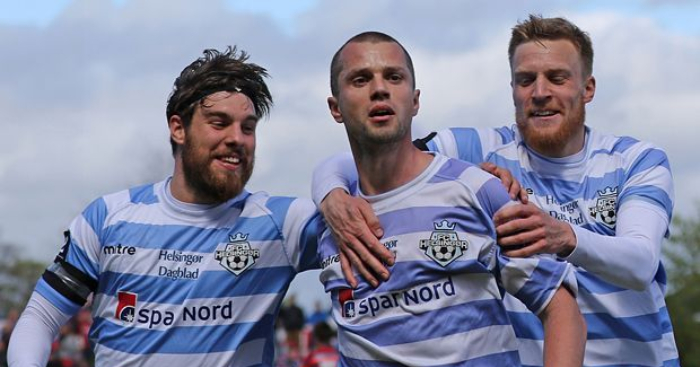 The ownership model of buying young talented players for low figures, developing them towards their potential and then selling them on for vast sums is nothing new in European football.

Porto and Monaco have been two of the best at demonstrating the effectiveness of this business brand.

In Denmark, and in particular FC Helsingor, they are currently adapting that prototype and revolutionising it to help evolve football in the USA.

They aim to identify gifted youth players from America and provide the right environment to thrive before moving them on to Europe’s elite.

“I had been looking for almost a year to identify Denmark as the correct spot,” says co-owner Jordan Gardner.

The businessman’s investment portfolio already included Ireland’s Dundalk FC, so when his contacts informed him which clubs were potentially for sale, it was all about seeing if they had the right characteristics.

“Not just the club, but the climate in Denmark was perfect for what we were looking for, the relaxed foreign player restrictions, the culture of playing your own players and everyone speaks English.

“From an acquisition perspective, when you are bringing players in from all over the world the fact that they speak English is important.”

Schools in the country teach English from the age of seven, which naturally enables pupils to thrive internationally and help foreign visitors.

Copenhagen is just 30 miles south of Helsingor and is a popular destination for travellers.

“Geographically, you are an hour plane ride from a number of top leagues,” Gardner adds.

“There’s a culture of playing young players. You can go to any game, whether it’s in the Superliga or 1st Division and there are 17, 18 and 19-year olds playing for the first team, which certainly doesn’t happen in many places in the world.”

FC Helsingor were only formed in 2005 under the name Elite 3000 Helsingor before changing to their current moniker in 2012.

They were quickly promoted through the ranks to Denmark’s top division but suffered relegation to the second tier last season.

“It’s a young club and with us coming in now it feels like we have had a blank board to work with,” says sporting director Mathew Barnes.

“We have got a new stadium, new ownership, new head coach and new executive staff.

“That has been our goal from day one; we need to have basic philosophies, from our playing philosophy to our recruiting philosophy and to our philosophy in the community.

“We have been building that from scratch and the resounding theme has been collaboration.”

Identifying the right people for the right jobs has been the early approach, with the takeover by the American consortium led by Gardner only completed at the end of March.

Former assistant manager Brian Gellert is now the chief scout, aiming to utilise his knowledge and experience of the club and league to recruit the right kind of players for the task ahead.

Former USA Under-18 coach Omid Namazi, who has also worked as Carlos Queiroz’s assistant with Iran, was recently appointed the manager entrusted with guiding Helsingor back to the Superliga while simultaneously developing the young talent that he has at his disposal.

However, shortly after his appointment, Namazi resigned from the position due to personal reasons, leaving Barnes searching for another head coach.

“There are so many great coaches that we know that could come in and tip the balance towards winning – which is important to us – but finding a coach that can be creative when winning (is key),” Barnes says.

“To also understand that the ultimate platform that we are building is going to be a selling club and a platform for young players to develop.

“To do that we know that we are going to see some mistakes and hit a couple of bumps in the road.

Helsingor realise that they aren’t the only side trying to attract the best young players from the region, but their strong relationships, scouting networks and understanding of the level in the US and throughout Europe make them well equipped to take full advantage of the market.

“Our strategy isn’t entirely different, we just feel like we have a better pulse on the American market than a lot of other clubs do,” says Barnes.

“Because we are a smaller club and can offer immediate first-team minutes to these kids, it comes up in a lot of conversations.

“‘Look! We can create a launch pad for you and then that second contract in Europe is the one that you will get paid.’”

The last five years has seen a number of American players move to Europe with Germany and the Netherlands at the forefront, which creates options for Helsingor when aiming to sell players in the future.

However, for now the focus and expectations are more modest and they have created links to Denmark’s top teams such as FC Copenhagen and Brondby.

The club are also in the process of completing their new stadium, which will make a huge difference to the infrastructure and overall facilities.

“A lot of the clubs in Scandinavia are not there, even in the Superliga which is the top level,” Gardner says. “It’s a beautiful facility, so it will help us commercially as well.

“Infrastructure is so important when developing young players and recruiting good talent. American kids who come over to Europe are going to want to know what the facilities are like.”

This project has already started to evolve to throughout the world and pathways have been formed with other English-speaking countries.

“Elijah Just is one player that we think can come in and within a year or two can move on to a major club,” enthuses Barnes.

“He had a great Under-20 World Cup with New Zealand and scored a massive goal against Colombia in a televised game.

“We feel he is just going to blossom here with first-team minutes.”

England is another area which has untapped potential, even though the youth system has greatly improved.

The sheer number of players, competition and money at the top of the game mean that it’s impossible for some not to fall through the net.

“I have always been really interested in the market for players being released from pro academies,” Barnes says.

“Statistically speaking in the UK, the average is less than 3% of players are getting contracts at the age of 18.

“That number is pretty standard throughout each division in the UK.

“We know that there are a lot of good players there and that the academy system is probably as good as it can be.”

Gardner is also looking towards these shores long-term: “We realise that there are a lot of kids in the UK in academies (being released) that are still really good players and Scandinavia could be a good opportunity to relaunch their careers.”