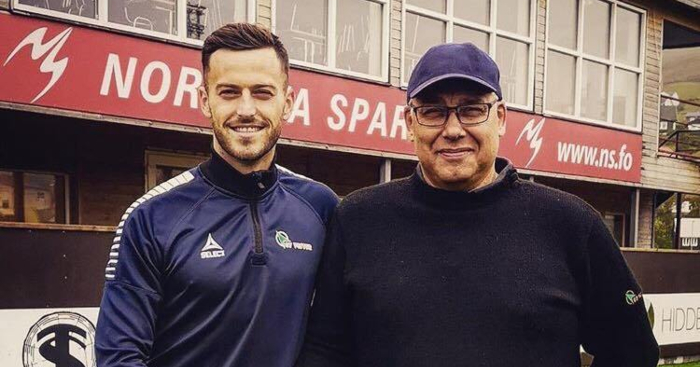 Football is back on the Faroe Islands: Find out more about the whale-loving locals and their league from a man who has experienced it all himself

A lot of us have become honorary fans of clubs from Belarus, with the country’s top flight defying the rest of Europe and continuing its fixtures.

There have been English language accounts popping up for all the clubs, livestreamed games on YouTube and one club has even been selling virtual tickets and filling their stands with mannequins of people from across the world.

The Belarusian Premier League was the only league in Europe in action throughout April but that is now set to change: competition for the hearts of the football-starved public, comes in the shape of the Faroe Islands Premier League kick, which kicks off its 2020 campaign on Saturday.

The 10-team league based in the country 200 miles off the north coast of Scotland in the middle the North Sea was due to start back in March but will now instead run from this weekend until November. The decision to resume football was made after no new cases of the virus had been reported from April 6 to to April 22, with the country recording zero deaths as a result of the virus.

The league may not usually attract much attention, but with a spot available in the qualifying rounds of both the Champions League and Europa League up for grabs and still very little football for us to enjoy, it seems the perfect time to get to know a bit more about it.

One man who does have experience of the league is Charlie Machell, a 25-year-old midfielder from Newcastle. He spent the second half of the 2018 season playing in the country’s top-flight after a spell in Denmark.

“I received a message from an agent working in the Faroe Islands to ask whether I be interested in potentially playing the second half of the season there,” says the former Newcastle United youngster.

“My first instincts were slightly ignorant, ‘The Faroe Islands? that sounds hot, maybe it’s near Egypt?’ I went on my phone to find out more and to my surprise and I was actually already close. I saw that the islands were located 200 miles north of Scotland and I thought to myself, ‘Surely that’s in the middle of the sea?!’

“I was right of course!”

It’s fair to say the club who were interested in the midfielder, 07 Vestur, needed all the reinforcements they could get. Before the Englishman’s arrival, they had one of the worst records in Europe with just one win in their last 20 matches, but they still had hopes of avoiding relegation.

Before even landing in the country, the journey gave Machell a great preview of what the next few months would be like.

“I arrived at Edinburgh Airport for the 90-minute flight not really sure what to expect,” he says.

“With about 30 minutes of the flight left, the rain and wind started to hit and the plane literally floated down sideways as we landed in the only airport on the islands – it was a flight I will never forget!”

The conditions continued to surprise Machell as he went about making an impression on his new side.

“My first training session was good. The facilities were excellent, the best artificial ground I have played on and the gym and changing rooms were better than Denmark for sure.

“I played well, and I thought this isn’t so bad. The club had given me a three-bedroom house overlooking the pitch. It wasn’t a modern piece of luxury but it would do for the meantime. The views were incredible, high mountains surrounded by water, really breathtaking.

“I woke up the next morning for my second session and the views were gone. I could barely see the pitch less than a hundred meters away. The fog was awful, rain like you had never seen and a wind gale that felt as though my house may fall down.

“I remember thinking, ‘At least we won’t be training in this,’ so you can imagine my face when I was told that training would be on as normal.

“The first incident in training was the goalpost tipping over nearly ending the career of the 42-year-old goalkeeper. He would then take a goal kick which went over his own bar and landed in the sea.

“All I can remember was finishing that session being frozen and standing in the shower for about 45 minutes trying to warm up.”

Charlie Machell has been on a football journey since leaving Newcastle United's youth team. Landing in 🇸🇬 Singapore for his latest adventure, the midfielder is taking the next step in his career with Hougang United Football Club. 🐆️⚽️#1PlaySports #SPL #Football pic.twitter.com/BR6UVbtpHN

The club’s form started to improve after Machell’s arrival and when they signed one of his former team-mates from Denmark, things were looking up. In the end, the club narrowly missed out on safety by just one point.

There are several memories that stand out for 25-year-old from his nine-game spell on the island, including scoring his first professional goal, but it was off the pitch that the country left the biggest impact on him

“There were some moments in the Faroes I will never forget,” he says.

“After winning a big game, we were invited to a birthday party of one of our goalkeepers. They were telling us about how amazing the food would be and that we would be having the island’s speciality.

“This turned out to be a plate of whale. Everyone was digging in saying how sensational it was waiting for me to say the same.

“I remember trying it and it being the worst thing I have ever eaten in my life. It was black and rock solid and I would tell you what it tasted like, but it was like nothing I had ever had before. I had to run off to the toilet and get rid of it, while pretending how good it was to not offend anyone.”

Unfortunately for Machell, that was not to be the end of the whale activities.

“I was invited down one morning to help kill some whales, which I obviously rejected.

“The locals would round up the whales and make them swim onto the beach and then they would run over with daggers and stab them, turning the water red.

“It was one of the strangest events I have ever witnessed and personally I felt it to be very wrong.”

Despite the unsavoury taste that some of the island’s culture left on Machell, it was an experience which he enjoyed and it provided a fantastic platform for what was to come next.

He has since spent a season in Cambodia, winning the league, and is now playing for Hougang United in Singapore, making his debut in Asia’s equivalent of the Europa League.

For your new favourite league, the Faroe Islands Premier League begins this Saturday with all 10 teams in action. Teams play each other three times each and one team is relegated. Five different teams have won the title in the past 10 years, with KÍ currently the reigning champions.

On which club you should support, unfortunately, 07 Vestur have yet to return to the top-flight

But why not give B36 a chance? Former Hereford United winger Sam Malsom spent the 2008 and 2009 seasons with the club and their nickname is the White Tigers – do you need to know any more?

The Geordie let go by Newcastle but picked up by Reggina

The Englishman combining coaching and hotel work in Estonia