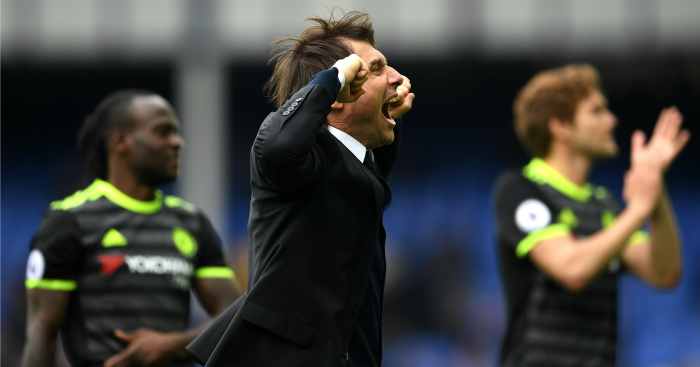 Antonio Conte’s use of a three-man defence at Chelsea has inspired plenty of copycats, but Jose Mourinho’s Manchester United proved last month it’s sometimes good to be different.

Ahead of the 2016-17 Premier League campaign, a lot of the excitement focused on what would take place in the dugout rather than what would happen on the pitch.

Given they were the only ones yet to manage in the Premier League, much of the fascination centred around Guardiola and Conte, and whether they would successfully implement their methods in England, or if they would have to adapt their own philosophies to a league which rarely affords its participants a chance to stop, reflect and analyse.

Following the signing of Michy Batshuayi, the noise coming out of Chelsea was that Conte’s preferred option was a 4-2-4 system, but he started the season with the now Premier League standard 4-2-3-1.

This allowed Guardiola to take the early plaudits, bamboozling onlookers with his use of inverted full-backs as City began the campaign in irrepressible form, winning their opening 10 fixtures in all competitions. 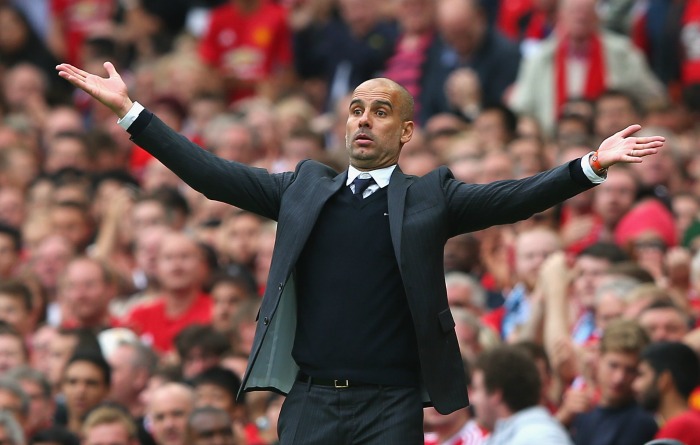 The rest of the league’s most high-profile managers, meanwhile, were largely sticking to type. Klopp and Pochettino continued to preach their intense pressing, Mourinho’s Manchester United were functional and pragmatic, and Wenger was as stuck to his principles as ever.

Chelsea were somewhat underwhelming, continuing to display the frailties which had undermined their shambolic title defence the previous season.

The Blues failed to win a league match in September, with a home defeat to Klopp’s Liverpool and 3-0 humbling at Arsenal leading to suggestions Conte could become the latest manager to feel the wrath of Roman Abramovich and become yet another fancy-dan foreigner to be chewed up and spat out by The Best League In The World™.

But the defeat at the Emirates had a profound effect on not just Chelsea’s season, but the Premier League campaign as a whole. With his side 3-0 down at half-time after more defensive calamities – anathema for any Italian coach – Conte waited 10 minutes into the second half before making a change which would shape the rest of the season. 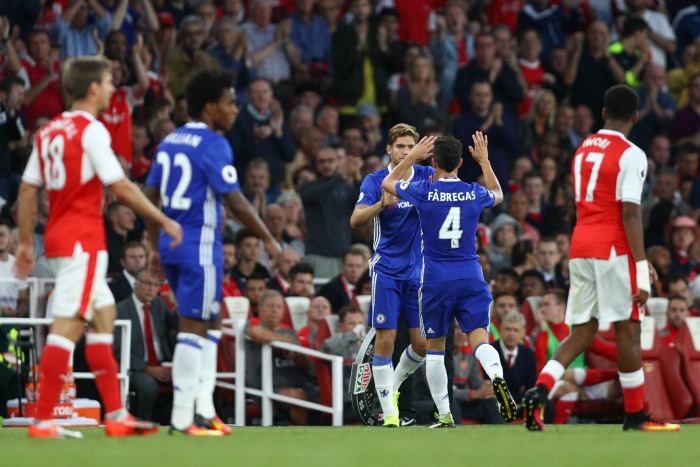 Off went Cesc Fabregas, on came Marcos Alonso, while Gary Cahill and David Luiz were given the support of a third centre-back, in this instance Branislav Ivanovic.

While too much emphasis can be placed on formations – it is often the roles players are tasked with rather than their starting position which are significant – adopting a back three is a fundamental change to any style of play.

And without Conte’s change, you can almost certainly say that Chelsea would not be on the brink of reclaiming the title.

Not only did it eradicate their defensive worries almost overnight – they conceded only three goals in their remaining 13 league games before the turn of the year – but it also unlocked the attacking potential of Eden Hazard, Pedro and Diego Costa.

Rather than deploying the more straightforward 3-5-2 which was once all the rage in English football, the 3-4-2-1 allowed Hazard and Pedro to exploit the space behind the wingers and to the sides of the holding midfielders in the typical 4-2-3-1. 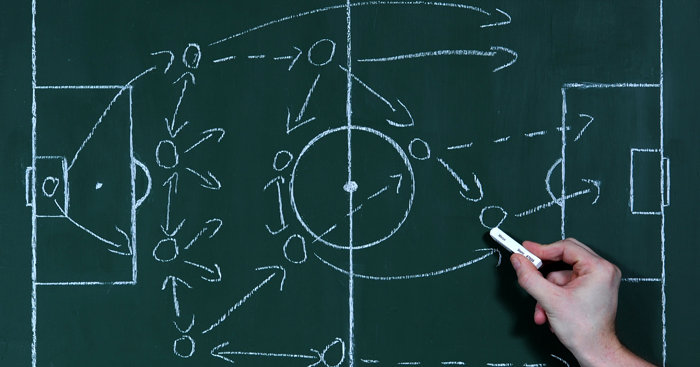 READ: Formations: Are they worth the whiteboard they’re written on?

The system perfectly suits that most modern of attacker who is neither an out-and-out winger, a traditional number 10 nor a conventional striker, affording them the freedom to drift and rotate, safe in the knowledge they have a central block of five players behind them, plus two athletic wing-backs.

“I won two championships with 4-2-4 at Bari and Siena,” Conte said in October. “Then I started that system with Juventus, went to 4-3-3 and eventually arrived at 3-5-2 because I had players better adapted for that system.

“But it’s not my ‘preferred’ system. My preferred system is the one that permits my team to win.”

Imitation is the sincerest form of flattery

The popularity of certain systems tends to come in cycles, and Chelsea’s success has helped prompt a resurgence of the back three not seen in England since the mid-90s.

Some of these had tried it before Chelsea, of course, but at one point or another this season, Tottenham, Liverpool, Manchester City, Manchester United, Everton, Leicester City, Bournemouth, West Ham, Stoke City, Watford, Crystal Palace, Swansea City, Hull City, Middlesbrough and Sunderland have experimented with a three-man defence.

Only West Brom, Southampton and Burnley have not even tried it once.

Is that the sign of a league becoming increasingly tactically flexible or rather the laziness of a group of managers simply following the lead of the frontrunner?

Even Arsenal have tried it

The most surprising use of the three-man defence has come at Arsenal.

Apart from when he initially arrived at Highbury and was urged not to disrupt a defence already functioning as a back three/five, Wenger has always preferred a four-man defence. 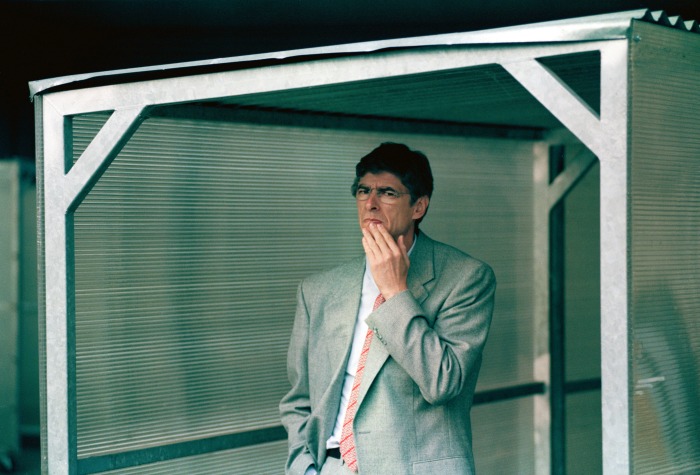 Speaking about the problems of a back three in 1997, Wenger said: “The problem is you defend deeper, and though you have more security in the centre you are less dangerous offensively on the wings.

“I would like to attack and defend in a higher position. When you defend deep it is a problem because you need five, six, eight passes on the way to goal and that is a long way to go.”

Conte, however, has proven the platform does not have to be negative and can still be used to press opponents higher up the pitch.

Arsenal’s results have also improved since the switch, but by opting to match up against teams also using a back three, Wenger is relying on his players to win their individual battles against their opposite number.

It’s a tactic that certainly didn’t work in the North London Derby defeat to Tottenham, who simply have players performing to a higher standard than their Arsenal counterparts.

Instead it has been Mourinho – much maligned for the majority of the season – who has shown one potential way of getting the better of the system.

Opting for something resembling a 4-4-2 against Chelsea last month, the pace of Marcus Rashford and Jesse Lingard disrupted the Blues’ defence high up the pitch, while the threat of Hazard was nullified by sacrificing Ander Herrera to man mark the Belgian, as United ran out 2-0 winners at Old Trafford.

That day, Mourinho proved what Wenger had said when he first arrived in England: “There is no perfect system.

A three-man defence has proven the right system for Chelsea, but that does not necessarily mean it’s the right one for all.