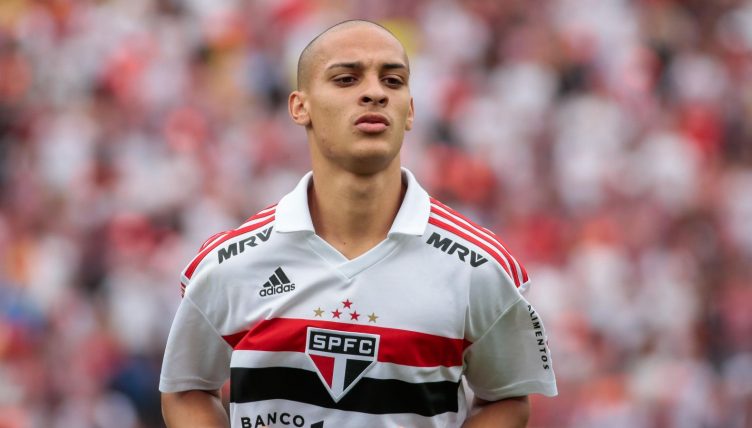 It was the middle of summer in Sao Paulo, the last day of January 2019, and as is normal for the time of year a tropical deluge had engulfed the city just before five o’clock in the afternoon.

Nobody in the elegant old Pacaembu Stadium near the city’s centre cared though, especially not those in the white, red and black of Sao Paulo Futebol Clube. They were transfixed by a waifish, shaven-headed figure in the middle of the pitch.

He was not much to look at, the boyish physique an indication of his inexperience. And with his sopping wet, baggy kit sagging from his shoulders, he looked more drowned rat than future football superstar. But then he took off, zipping along the slick surface like greased lightning in pursuit of a delightfully weighted through-ball.

As he accelerated, first bearing down on his marker, then easing past him, the inevitability of the outcome became ever clearer. The scrawny teenager collected the ball, paused just long enough for the defender’s momentum to take him past, then cut inside and rammed the ball through the goalkeeper and into the net. Sao Paulo two, Vasco da Gama nil.

Seven minutes into the second half, the final looked like it was won. Sao Paulo fans jumped up and down, the puddles on the concrete terraces splashing beneath their feet.

It was only a youth tournament, the Copa Sao Paulo de Futebol Junior, or Copinha. But this was doubly special.

Firstly, this was the youth tournament in Brazil, the tournament that has given rise to the careers of Kaka, Neymar, Gabriel Jesus, Vinicius Jr and countless others – the one that Brazil stops to watch every January, when 120 teams descend on Sao Paulo state to do battle – and its latest star had been born.

Secondly, Sao Paulo fans had not seen their senior team win a trophy for seven years, far too long for a club of their stature. If you want to understand the symbolic value a successful youth team can take on when the first team is not performing, just ask Manchester United fans.

As it happened, any thoughts of Sao Paulo comfortably seeing out the second half before sauntering up to lift the trophy were premature. Vasco came back, scoring twice to put all those in attendance through the agony of penalties. But Sao Paulo passed the test of character, winning from the spot.

And while goalkeeper Thiago Couto was the shootout hero, there was no doubt about who had been the real star of the show: that lightning-quick, goalscoring waif Antony dos Santos.

His stardom had been signposted long before the final had kicked off. Through the knock-out rounds, Antony had consistently displayed the combination of audacity and effectiveness that have since taken him to Olympic gold with Brazil, to Ajax and now, for £85.3million, to Manchester United.

While Antony first catches the eye with his tricks and inventive dribbles, he had already shown even then that he was more than a mere show pony.

In the 2019 Copinha round of 16, he scored against Mirassol. In the quarter-final against Cruzeiro, Antony created his team’s only goal, whipping a left-footed cross to the back stick from the right flank – something United fans will become used to watching in months to come. Then in the semi, he put Guarani to the sword, scoring twice from outside the box, both with that magical left foot after cutting in from the flank.

In the final, even before the goal, he had been Sao Paulo’s outstanding player, setting up his team’s first with another one of those searching crosses that are a nightmare for defenders.

This was a fine youth team, make no mistake. Tuta has since gone on to win the Europa League with Eintracht Frankfurt, while his central defensive partner Morato now plays for Benfica. Midfielder Gabriel Sara has recently been signed by Norwich and Rodrigo Nestor has become an integral part of the Sao Paulo first team.

But Antony had something else, not only in his footballing ability but in his personality, a magnetism that can be illustrated with a story from that same edition of the Copinha.

That shaven head that made him look even smaller and slighter than he otherwise might at the Pacaembu that afternoon was not a fashion statement but an act of solidarity.

He had shaved his hair and he had convinced all his team-mates to do the same for six-year-old Larissa, a Sao Paulo fan who was having chemotherapy to treat a cancerous tumour in her brain.

Antony had met her before the Mirassol game, promised her that he would score and broken down in tears when he delivered on that promise. He had made sure that she was at the final and had walked out onto the pitch at the start holding Larissa’s hand.

The act did not go unnoticed in Brazil. Barely more than a child himself, Antony’s gesture was perhaps as telling as his on-pitch contribution. Here was a boy who understood the impact that his kindness could have on someone who looked up to him and who needed a friend.

It was not a one-off, either. Antony has taken Larissa under his wing, even flying her to the Netherlands to visit him in April 2022.

Given where he comes from – a favela in the city of Osasco known as Inferninho, or ‘Little Hell’ – it is not a surprise that he empathises so deeply and genuinely with those going through tough times.

In 2020, he told the Guardian about his childhood home: “What I experienced there was seeing things that hurt people: families losing their sons, husbands, wives.

“I suffered when the police invaded my home to see if there was anything there. I lived in the middle of the favela, close to where drugs were sold, almost in front of our house.

“These are things you see and it shocks you. But I always had strength from my family, a family very devoted to God, who always showed me the right path to follow.”

His rise since January 2019 has been quite remarkable. He has broken the Sao Paulo first team, played at the Olympics, won trophies with Ajax and taken part in the Champions League. He is now the most expensive player ever sold from the Eredivisie, still just 22 years old. Later this year, fitness permitting, he will almost certainly be part of the Brazil squad that are favourites to win the World Cup.

But that game at the Pacaembu against Vasco, when his inventiveness and efficiency combined to inspire Sao Paulo to the Copinha title and his generosity of spirit gave an immeasurable lift to a child who needed it dearly pointed in the direction of travel we have seen him take since.