No wonder Arsenal shipped out Pepe, Marquinhos is ready to go now 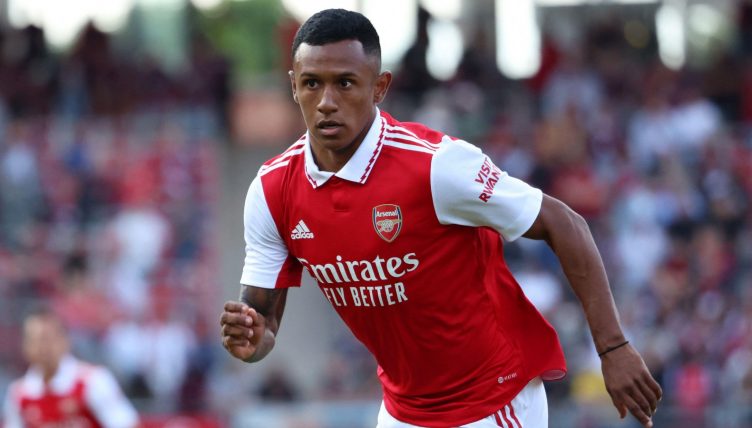 In the summer of 2019, few outside of distinguished scouting circles had heard of Gabriel Martinelli.

The Brazilian attacker had just turned 18 and signed for Arsenal for a modest £6million fee. Those in the know recognised Martinelli, who was catching the eye at relative minnows and Ituano FC, as one of the most promising prospects in South America.

Signing his young compatriot was one of the first things that former Gunners midfielder Edu did as technical director. Barcelona and Manchester United had Martinelli on trial but they failed to land his signature.

Three years on, it’s not just scouting nerds that know the name of Gabriel Martinelli. He’s now starting every week under Mikel Arteta for an Arsenal side that sits top of the Premier League.

That’s a pathway that new signing Marquinhos looks set to follow. The €3.5million forward from Sao Paolo was a relative unknown when he arrived at Arsenal but that’s already beginning to change.

Edu appealed for caution when the signing was announced.

“At 19, he is still very young, so he is a player for the future,” said the Arsenal director. “We look forward to Marquinhos now joining us for pre-season, making his new home, and continuing to grow and develop with us.”

Expectations have been curbed and sure enough, Marquinhos has so far clocked up more appearances for Mehmet Ali’s Under-21s in Premier League 2 than he has for Arteta’s senior side.

But like Martinelli before him, Marquinhos is already demonstrating he has the ability to make an immediate impact beyond the youth set-up.

“He’s a left-footed inverted winger playing off the right,” said Arsenal’s Under-21 boss Ali, who is in close communication with the senior coaches about what they want from him.

“He’s got the licence to come inside and combine with the centre-forward or get shots off, but we try to have aggressive full-backs and midfielders who also support at the right times.”

Marquinhos already has three goals and an assist from three appearances for the Under-21s, including a pair of headers against West Ham that underline his fox-in-the-box instincts.

Marquinhos instantly stood out on his first appearance for Arsenal’s youth side, scoring one and setting up another in a 3-1 comeback victory against Manchester United.

He was a constant nuisance throughout, winning free-kicks in dangerous areas and creating plenty more chances that were spurned by his team-mates.

The crowning moment of that early statement performance was undoubtedly his gorgeous outside-of-the-boot assist, crossing the ball in and giving Miguel Azeez a simple task to finish. That one touch is an early hint of Marquinhos’ technical ability and flair.

“The star of the show was undoubtedly Marquinhos, who simply looked too good for Under-21 football,” was the verdict in the match report on Arsenal fansite Daily Cannon.

“The winger was strong on the ball and threatening whenever he had the chance to face up the defender, but he was also composed, laying it off when another player was in a better position. He’ll surely play some senior minutes this season.”

Indeed, it’s barely taken a month for the 19-year-old to get his chance. Arteta handed Marquinhos his full competitive debut in the Europa League – the same stage on which a teenage Martinelli first began to make a name for himself three years back.

Arsenal have made a blinding start to the 2022-23 season, but the question mark that remains is over their squad depth and ability to deal with a return to European football. Last term’s major step forward coincided with full focus on the Premier League campaign.

The early evidence is encouraging. Arteta’s Gunners didn’t dazzle in their group stage opener away to FC Zurich, but they got the job done with a 2-1 victory – after the coach made seven changes and rested key players.

Of all the fringe players to be given the nod, including £34million signing Fabio Vieira, it was Marquinhos that did the most with the opportunity.

Sixteen minutes into his debut, he burst with considerable pace into the box to arrive on the end of Eddie Nketiah’s deflected cross, with a finish so emphatic it looked all too easy.

A goal on his senior debut for the club ⚽️ #UEL pic.twitter.com/hdJjgexKbv

On the hour mark, he turned provider for Nketiah with a beautiful lofted ball from the right to the far post.

“He picked and chose his moments cleverly, whipped a couple of crosses in. Really good quality. He kept on producing,” responded Martin Keown on BT Sport.

Marquinhos’ numbers at Sao Paolo aren’t immediately striking – four goals and three assists in 42 appearances – but Edu and his team of scouts evidently saw ability in the youngster that goes beyond those basic stats. He’s delivering far faster than anyone could have reasonably expected.

According to tabloid reports, Arsenal had originally planned to send Marquinhos out on loan but seeing him in pre-season prompted a change of plan.

Instead, club-record signing Nicolas Pepe has been shipped out. That’s a brave call and a huge show of faith in the new recruit, but the early evidence is that it’s the right one.

At the very least, Arsenal’s new rising star looks more than able to step up in the cup competitions. If Marquinhos continues to make the most of every opportunity he’s given, don’t be surprised to see him making an impact in the Premier League sooner rather than later.

READ NEXT: Arsenal’s 11 debut goalscorers under Wenger and what they did next