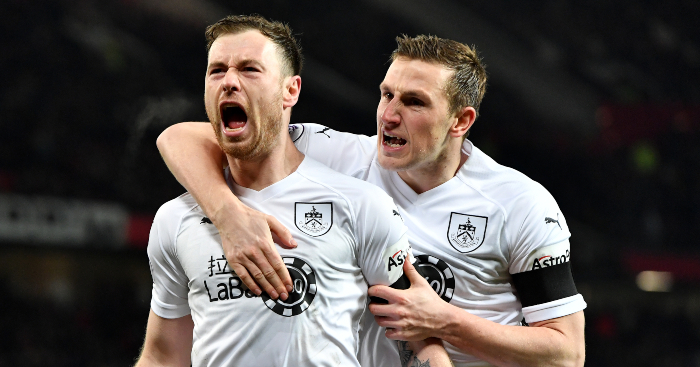 Tactical evolution is fine, but Burnley’s old-fashioned strike partnership was the best thing in the Premier League last season.

Maybe they just learned from the best. When Ashley Barnes and Chris Wood first kicked a ball together, they were 20 and 18 respectively, playing for Brighton in League One.

The year was 2010, and both forwards had recently joined the South Coast club — Barnes from Plymouth and Wood on loan from West Brom.

Despite their inexperience, both had an immediate impact. Barnes became a key member of the Brighton first team, scoring 18 league goals in his debut campaign, while the younger Wood, playing fewer games, still found the net eight times.

But they were not alone.

Guiding them, inspiring them, showing them how to use their ever-thickening torsos in the most effective way possible was a 26-year-old Cumbrian named Glenn Murray, enjoying what was then his best goalscoring season.

His 22 goals, combined with those of his young team-mates, helped Brighton win the league without breaking a sweat. 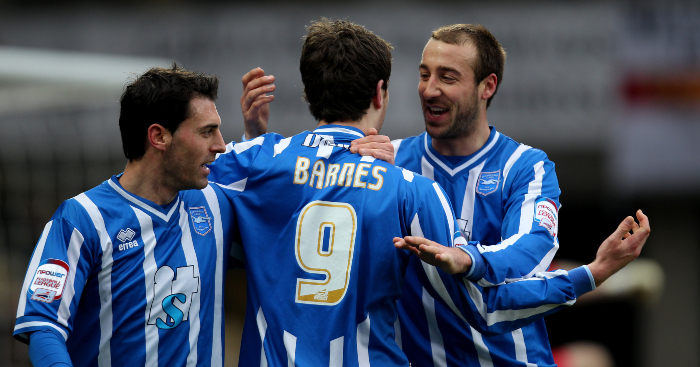 Barnes, Wood and Murray on the pitch together was a strange sight.

Murray, of course, has always been the quintessential English target man: robust, tenacious, good in the air and — helpfully if not critically — balding at the pate.

And yet the more experienced striker, at six feet tall, was actually the smallest of the trio. Barnes stands at 6’1 and Wood at 6’3. All are fearsome figures, and all would be capable of leading the line by themselves.

Fortunately, they rarely had to.

Look at the period of February 5–22, 2011, for example. During this time, top-of-the-table Brighton scored four goals in three consecutive fixtures, winning 4-2, 4-1 and 4-0. In each of those games, all three forwards featured in Gus Poyet’s starting XI, scoring eight of the dozen goals.

Truly, something strange was happening here: with barely a trick or shimmy up their collective sleeve, three very big men were bulldozing their way to success, helping Brighton to a comfortable promotion campaign.

Even in the lower leagues, this wasn’t how football was supposed to work. Where was the guile? Where was the technique? How, dear God, did the trio score so many goals despite missing five penalties between them in just one year?

Come the summer of 2011, the young duo and their elder mentor were separated when Wood’s loan ended and the in-demand Murray moved on a free transfer to Crystal Palace, Brighton’s biggest rivals.

Only Barnes remained with the Seagulls, where he would provide solid if unremarkable goalscoring returns for another two and a half years.

For now, the weirdest attacking dynasty in Sussex had come to its end.

In August 2017, six years after Brighton’s promotion from League One, Barnes was playing for Burnley, averaging around five goals a season as the Lancashire side bounced between Championship and Premier League.

Brighton’s promotion season had been something of a blip, it seemed: Barnes was a combative and very useful striker, but not all that great at finding the net.

It therefore made sense that his manager, Sean Dyche, was in the market for somebody prolific to fill the void left by regular goalscorer Andre Gray, whom Dyche had begrudgingly sold to Watford.

His choice turned out to be a good one. 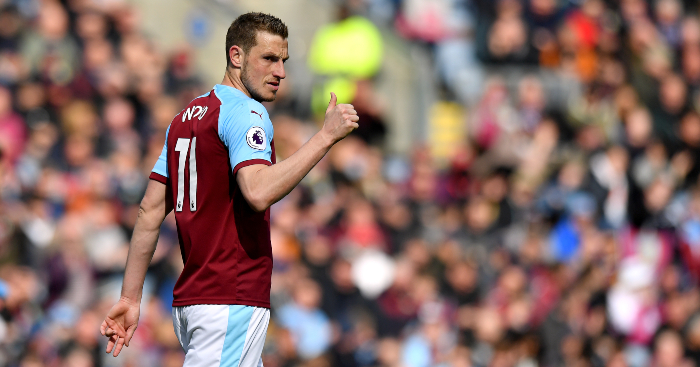 On 21 August, Burnley forked out £15million for none other than Chris Wood, Barnes’ former strike partner, who had scored 44 times in 88 games for Leeds over the previous two campaigns.

Here was the ideal in-form goalscorer to join the more utilitarian Barnes and Sam Vokes.

But then something remarkable happened. Wood’s arrival not only brought goals from the New Zealander; it also motivated Barnes to put in his best scoring season for six years.

The regular rotation of the reunited team-mates produced a total of 19 goals and an unexpected 7th-place finish in the 2017-18 Premier League.

The forwards did not, however, play together all that much. In total, the duo shared the field for a total of 718 minutes, equal to about eight full games. This was not a repeat of their barnstorming days at Brighton: this was patient turn-taking.

Dyche, who had previously preferred to use midfielder Jeff Hendrick behind a single striker, decided this would be the year to play two up top in a more orthodox 4-4-2.

For the strikers themselves, it was a dream: Wood matched his previous Premier League tally of 10, while Barnes found the net a dozen times — his best return at any level since the 2010-11 League One season under Poyet.

Better still, fans were treated to the sight of the two battering rams working in tandem. This was ugly football, but boy was it fun. And this time, the duo played together a lot, sharing the pitch for 1,942 minutes, equivalent to nearly 22 full games. On four different occasions, one assisted the other.

Trouble was, Burnley were doing terribly.

Twenty years ago, the sight of Barnes and Wood lining up together would have been unremarkable.

Today, however, they are something special, a glorious anachronism who sometimes seem to be playing a different sport to everyone else — one in which arms and shoulders play a surprisingly important role.

Only a handful of their goals have been objectively pretty, but there is something refreshingly simple about Dyche’s game plan and the strikers’ consummate ability to realise it. What was unusual in League One is downright phenomenal in the Premier League.

On that note, perhaps the finest example of Barnes and Wood’s brilliance was also the most serendipitous.

It came in February 2019, when the Burnley power couple faced their old team-mate Murray, now back at Brighton and still going strong.

“I was the older head when they came in as two young lads back in the League One season,” Murray recalled ahead of the match.

“We forged quite a formidable trio. It was good because they were just young and learning their trade — they got valuable game time and scored plenty of goals in that season.

“They’ve both gone on to have fantastic careers.”

That Saturday, Wood provided two goals — the first assisted by a brilliant long ball from Barnes — and Barnes himself converted a penalty, giving Burnley a 3-1 away victory and boost in their quest for survival. Murray left empty-handed.

‘Survival’, however, is a caveat to this wonderful partnership. Because although the pair enjoyed a great year in 2018-19, Burnley themselves did not, spending the entire season in or around the relegation zone.

Might Dyche have to sacrifice a striker to shore up a leaky defence next season? Might the introduction of VAR nullify the aggressive style of both players? Is this the last Shearer-Sheringham-type duo we will see for many years?

Whatever becomes of the Barnes-Wood relationship, it’s been a joy to behold.