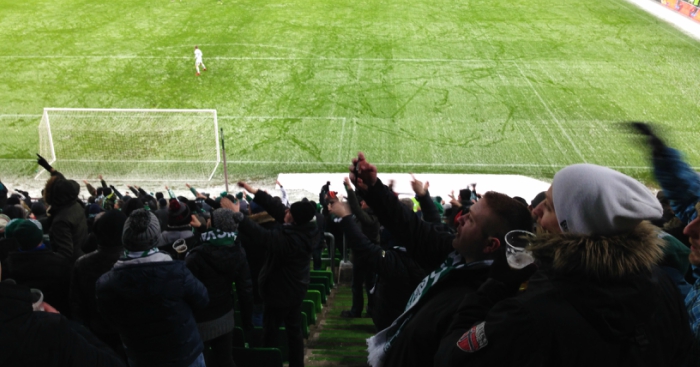 Registration is only supposed to take a few minutes, but we’re having to take part in a strange ritual to get our Ferencváros fan cards.

Filling out the forms in an empty office outside the Groupama Arena takes a few minutes, and this is followed by a quick photograph of our faces — understandable, if a little invasive. But there’s another step we need to take before getting our £2.50 passes into Hungary’s most decorated club.

“Put your hand on here,” says the clerk.

I don’t know what “here” is. On the counter is a black, donut-shaped bit of plastic with finger grooves on one side. I assume it’s some kind of fingerprint scanner, so I push into the grooves with my fingertips, only to be told that this is not correct.

Fingers now hooked over the edge of the plastic, I am apparently all set. I later learn that this contraption, made by a Hungarian company called BioSec, is taking a snapshot of my palm and veins.

The introduction of this vein scanner has been one of the most important events in Ferencváros’ recent history, and it will indirectly cause one of weirdest elements of the match we are about to watch.

You know that feeling when you’re super excited for your first game with your new club, but then a swift Google search reveals that club to have a far-right following and a history of crowd violence?

Ferencváros is one of those clubs. Though its more fanatical fans are a minority and its overtly racist ones a minority within that minority, this is still a club with big problems.

Introduced in 2014 alongside the shiny new Groupama Arena, the scanners were a preemptive ploy to stamp out bad behaviour in the stands, but the strategy has kind of backfired.

Perhaps unsurprisingly, the idea of volunteering bodily identification didn’t go down well with a set of supporters generally seen in balaclavas. Many, not unreasonably, felt they were being forced out of the terraces. 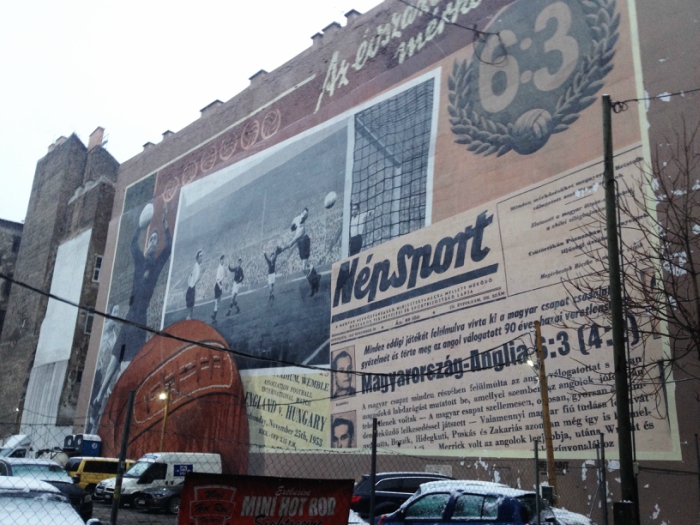 Because of this, many of these ultras decided to boycott the Groupama, missing a huge stretch of home matches between 2014 and 2017. This resulted in dwindling attendances and prolonged demonstrations outside the new stadium.

But where should one stand on the politics of privacy in football? Taking a stance on the vein scanner presents something of a dilemma.

On the one hand, it seems absurd that I’ve just handed over my biometrics to a football team in Hungary. But you can obviously understand the club’s attempts to stamp out the most extreme aspects of its hooliganism. And there has been some pretty nasty stuff, which makes me wonder why I didn’t choose one of Budapest’s other clubs to cheer on.

Overall, it’s not a great start to life as a card-carrying ‘Fradi’ supporter.

Worse still, I’ve promised Planet Football a lighthearted article in which I document the late career of 38-year-old Zoltán Gera, making observations about how his current Ferencváros teammates compare to Dickson Etuhu and Claudio Yacob.

Suddenly I’ve now got this political elephant in the room, I don’t know how to put it all together.

To be honest, I should have seen the hooliganism warning signs.

Days before handing over my veins, I spotted the Hungarian translation of Joey Barton’s autobiography, No Nonsense, in the window display of a local bookshop. Why was it there? Does Budapest venerate footballers with marginally above-average crossing ability? Why did the book sit so close to a copy of Orbán: Europe’s New Strongman?

To use Barton’s terminology, it probably has something to do with the various shades of nonsense surrounding Hungarian football.

Besides the fanaticism, which you can romanticise if you’re a boring mid-90s Morrissey album but probably shouldn’t otherwise, there’s some pretty weird stuff going on at a higher level of the game, especially relating to Hungary’s Prime Minister, the nationalistic and extremely football-loving Viktor Orbán.

David Goldblatt and Daniel Nolan just wrote a brilliant piece in The Guardian about Orbán and football, the gist being that the government has pumped vast sums of public money into football, possibly because Hungary lost 6-0 to the USSR in 1986 and Orbán’s still sore about it.

That money has contributed to, amongst other things, a large and ornate stadium for Orbán’s hometown club and a new national stadium to replace the (roofless but great) Ferenc Puskás Stadium in Budapest. State funding also built the Groupama Arena.

The strangest thing, however, is that nobody really asked for this investment. The vast new stadiums record tiny attendances, while the quality of domestic and national football remains relatively unchanging. It’s Orbán’s personal obsession, for the benefit of fans who may or may not exist.

Perhaps the match itself will shed some light on Hungary’s unique football situation.

The game we’re attending is a local derby, though not one of the more hostile ones. It’s the first league fixture of the post-winter-break season, and Ferencváros are playing Budapest Honvéd, the current champions and former club of Ferenc Puskás. The stadiums of the two clubs are 11 minutes apart.

Snow is falling lightly as we reach the Groupama in the early evening, and there seem to be as many stewards and police as fans. 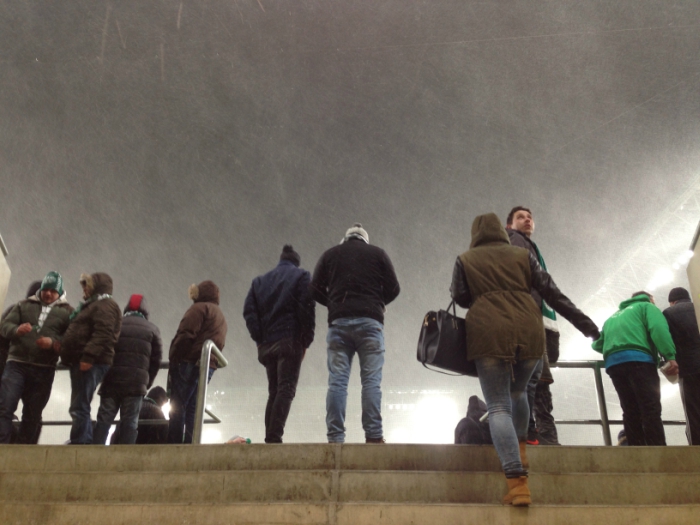 As we walk up the concrete steps into the stand, it soon becomes pretty clear we won’t need to find our designated seats, for which we paid around £12 each. 9,000 people have shown up, meaning the stadium is 38 per cent full. An entire stand sits empty.

That stand, it turns out, is the B-Sector, the ultras’ stand. But the ultras aren’t here.

Why? A bit of research reveals that, during a match against Debrecen in November, one Ferencváros supporter stabbed another in the ultras sector — the first incident of its kind in the history of Hungarian football.

For many ultras, it was the first match back at the Groupama after finally negotiating various compromises with the club over vein scanning, but the incident meant Ferencváros had to close the B-Sector for its next three home matches.

One of those matches is the match we’re watching, and it’s the match itself — unsurprisingly — where I finally discover the great and good in Ferencváros. For what it’s worth, the supporters seem goodnatured, enthusiastic and nonviolent.

It’s still snowing. The stadium is not full, but there’s a good atmosphere regardless. The away fans in red and black have packed their small section and are making the most noise.

You can’t buy drinks with cash, so I load 1,500 forints (about £4) onto my supporter card. This turns out to be a mistake. It’s -8 degrees, and the only thing we can handle is a styrofoam cup of hot fruit tea, which — as we discover — costs a nominal 1 forint. My supporter card can identify my veins, and it can now buy a drink for exactly one-sixth of tonight’s crowd.

Tea and worthless credit it hand, we find a spot for kickoff.

It’s incredibly cold, the fans are singing and somebody wearing jeans is standing in the centre circle for a kind of ceremonial kickoff, which is momentarily confusing. All these things are great. I eagerly scan the green and white shirts on the field for numbers 20 and 29, those of Gera and former Watford and Ipswich striker Tamás Priskin — an icon for anyone born in Suffolk.

Small hitch: neither player has been selected, or has even made the bench.

This is obviously disappointing, but I’m soon forgetting about the duo as Honvéd take a surprise early lead. The patchy but vocal Ferencváros support is clearly stunned. Nervous faces turn toward the riotous Honvéd corner.

Fortunately for Fradi, things quickly turn around. An equaliser is followed by a flurry of goals, and Ferencváros finish the match 5-2 winners, keeping them top of the league. Gera may be absent, but the game has produced more goals than Manchester United v Chelsea and the League Cup final put together.

The game’s best player is Ferencváros captain Daniel Böde. A midfielder by trade, he leads the line tonight with a Grant Holt gait and a Pirlo-like passing range. A neat half-volley makes it 2-1 midway through the first half, and he adds another in the second.

The scoreline, at the end of the day, is massively reassuring. I don’t love Ferencváros and probably never will, but hooligans, politicians and freezing weather combined can’t take the shine off a seven-goal thriller.

Defying FIFA: When 5 outcast nations competed in the 2006 Wild Cup