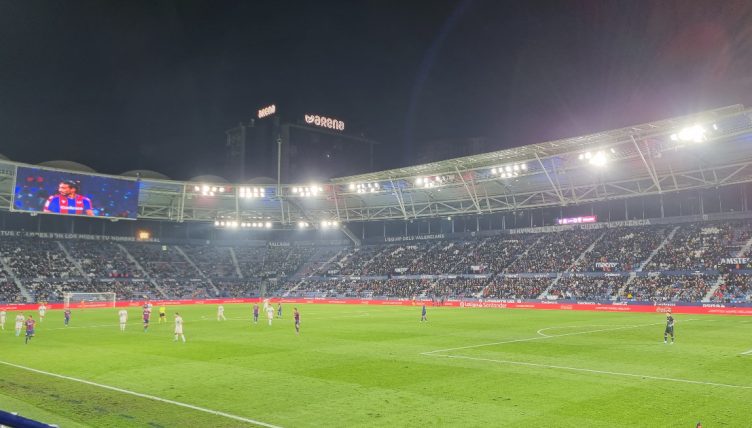 For the last few weeks, I’ve been touring football grounds in the Valencian region. On a fairly chilly February Friday night, my voyage led me to Estadio Ciutat Di Valencia to watch Levante take on Elche in La Liga.

Having been to three 0-0 draws in the last month, I was desperate for goals. But I was resigned to the idea that I would leave the ground with all my limbs in perfect working order, with no chance of injuring myself in any celebration.

Going into the game, Levante had won just two matches all season, while Elche weren’t exactly flying high. Part of me was half-expecting a snooze fest, and possibly the chance to have a quick nap if the play got really stale.

It was anything but.

The adventure started with a quick trip to the beach for some pre-match tapas and beers. Despite the weather not exactly fitting the stereotype of ‘sunny Spain,’ this was not an opportunity I would ever get in England (Brighton aside, maybe).

A sea view with some Estrella and olives certainly beats warm pints of Carling around the corner from Turf Moor.

A miscalculation on my part meant that my short tram journey to the ground saw me arrive just five minutes before kick-off. The amazing thing though, was that it was absolutely fine.

The stadiums in Valencia are notable for the way they’re plonked in the middle of a built-up, residential area. Like right in the middle, as if a ground randomly dropped from the sky, inviting everyone nearby to watch some tippy-tappy football at the bottom end of La Liga.

The likes of Wembley and the Emirates have acres of space around the ground beyond the stadium itself. Levante simply has a tram stop and a few bars selling €1.50 beers spitting distance away. Muy bueno.

Getting into the ground from the tram was so quick that I was inside to see the newly renovated stadium just as the players walked out of the tunnel. A light show and Ennio Morricone’s Ecstasy of Gold was enough to get the crowd decently hyped up as I made my way in from the concourse and threw a face mask on.

Disaster struck though, as my seat appeared to be non-existent. After looking in two different blocks to no avail, and following an awkward conversation in broken Spanish with a very exasperated steward, a front-row seat behind the goal was empty, and I grabbed it as the match kicked off.

One of the first things I noticed was how close the stands were to the pitch. There’s no running track or useless empty space between the playing area and terraces, unlike some other grounds (Hampden Park, I’m looking at you).

The fans and players are at one: the men on the pitch can feel the presence of every single body in every single seat, whether cheering them on or slandering their mothers.

I was so near Middlesbrough legend Antonio Barragan, playing at right-back for Elche, that I may as well have been his team-mate at the back.

The way Elche played, perhaps I should’ve joined in.

Levante squandered a couple of chances early on, much to the annoyance of the fans around me. They’d hardly seen a win all season, and despite the fast start to the game, it just seemed like yet another poor result was inevitable after Roger Marti had somehow fluffed his lines from two yards out.

That was until Levante finally had the breakthrough in the 37th minute. Jorge de Frutos is a player I knew a little bit about before, but in front of my eyes, he had turned into prime Franck Ribery, with a burst of pace setting him free before he squared the ball to Jose Luis Morales, who fired in off the crossbar.

The crowd erupted. But here’s where I encountered another problem: goal music.

I’m sure Charlie Methven from Sunderland Till I Die would have approved, but goal music is up there with clappers and ‘Can I have your shirt?’ placards as my biggest football pet peeves. Just stop it and listen to the crowd.

Things went uphill once Zombie Nation by Kernkraft 400 had finished playing, though. The players gathered in a huddle – aware of the opportunity to secure a very rare victory to attempt to get off the bottom of the table – and the stadium announcer prepared to announce the goalscorer.

My Spanish isn’t anywhere near good enough to understand most of what he said beyond “golazo”, but the crowd responded perfectly, with a powerful, booming shout in unison.

It was the kind of moment that sends shivers down your spine, as the 14,000 fans all bellowed the name of a club legend.

Morales is effectively Levante’s Jamie Vardy. Only arriving in the top flight aged 27, the 34-year-old was making his 300th appearance for the club, and this was his 100th goal or assist in the blue and red stripes.

Moments like that don’t happen very often when you’re in a relegation struggle, and it was clear how much that goal meant to him and his team.

The Levante singing section on the other side of the ground, which had been generating most of the noise throughout, had suddenly disappeared.

The reason? Most of them had rushed forward about five rows when the ball found the back of the net. When they eventually returned to their seats, the block was literally bouncing.

I took the decision to move seats for the second half and boy did it pay off. Whilst I was enjoying my role as the 12th man in the first row, an elevated position in a different section was appealing, with a closer look at the ultras in mind, and I made the switch during the interval.

Moving to the left side of the goal I was behind, I could still clearly see the obscenely large, brand-new screen showing the players’ names and the match action, fully equipped with tactical analysis during the game.

Any wannabe Jamie Carraghers in the crowd would have delighted at the sight of heatmaps whilst the game was in progress.

The biggest upgrade of moving seat though, was that I had the substitutes of both teams warming up so closely that despite now being four rows back, I was within Cantona kicking distance. I refrained from giving any unwanted tactical advice to the likes of Ezequiel Ponce and Coke. 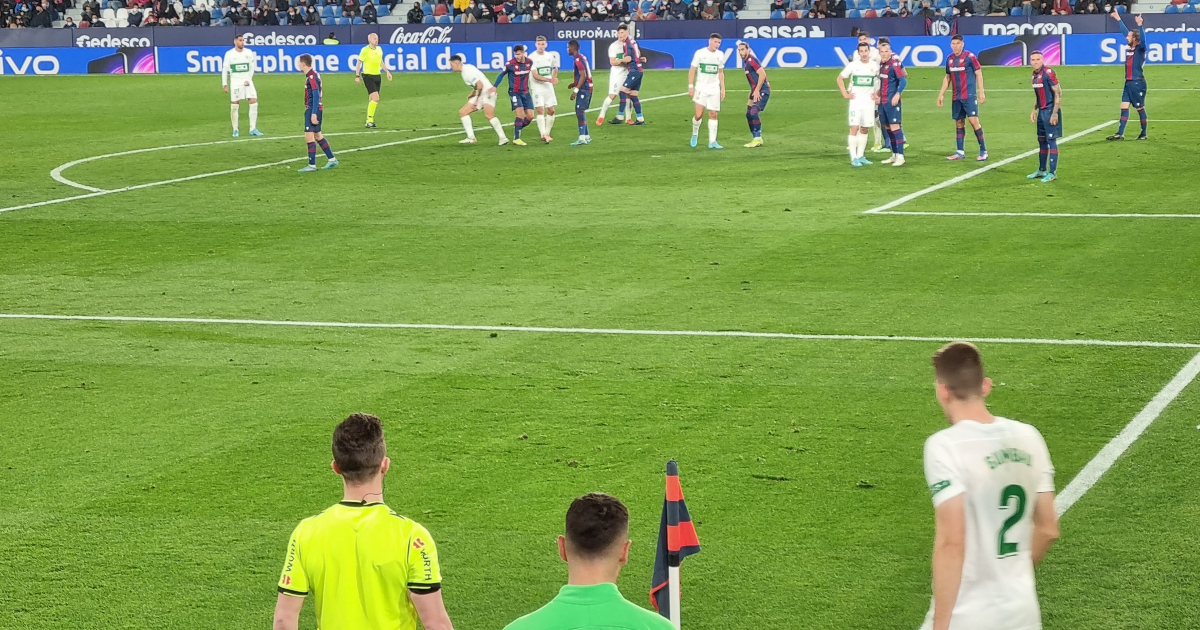 This ongoing entertainment alongside the game peaked when a certain Roberto Soldado came out to warm up for Levante.

Soldado has played for Valencia and Villarreal as well as Levante, and is best known on English shores for his infamously shit spell at Tottenham. Yet seeing the 36-year-old substitute just yards away proved too much to handle for a group of fans near me.

The trio whipped out an ironic ‘Goldado’ shirt and chanted his until he eventually waved at them, while the pockets of Elche fans around me cringed and even the striker himself seemed surprised that he still had a fan club among the Levante faithful.

The Soldado ultras were left disappointed, however, as the forward remained on the bench despite his manager Alessio Lisci using all five substitutes.

De Frutos, who was having a stormer of a game, proceeded to score following his assist, and the Levante fans exploded. They could feel the win was getting closer, and yet again, the crowd roared his name as his team-mates headed back to the centre circle.

Even when rock bottom of the table, the players had put on a monstrous display of skill, quick passing and goals, and the fans fully bought into it.

Anyone in the ground who hadn’t seen the league standings would have probably guessed Levante were in or around the top 10. Yet there they are, still 6 points away from safety, but now on an upward trajectory at least. 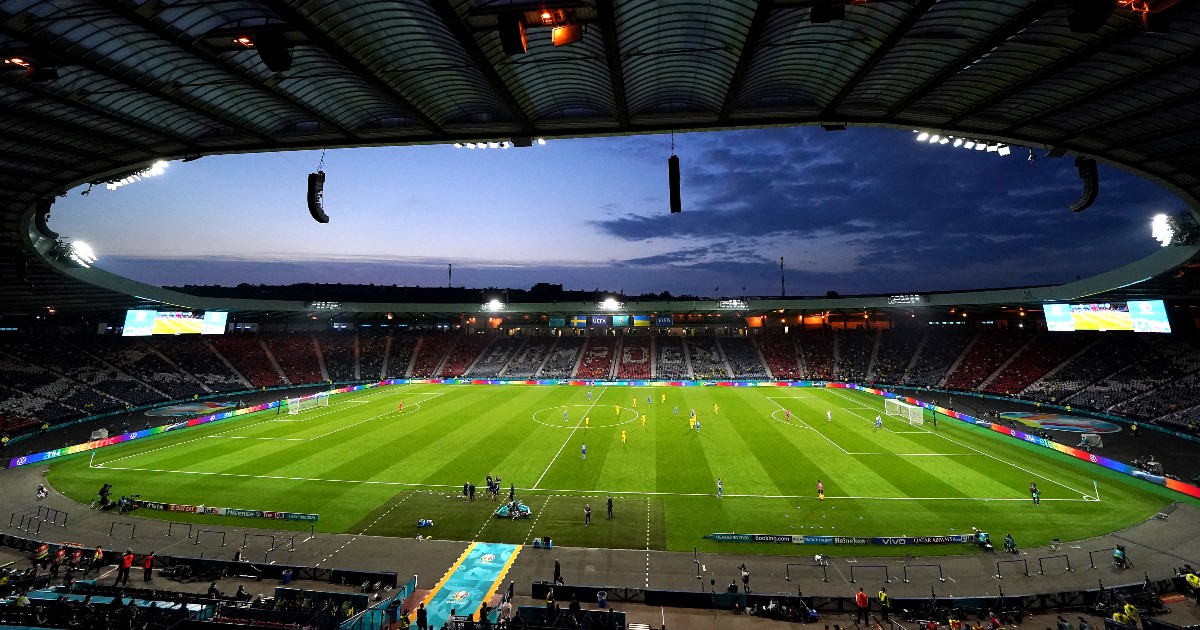 READ: Away Days: 479 days later, a trip to the match at last; now I want the real thing

Elche player Gerard Gumbau, who was once on the books at Barcelona, received his marching orders late on for a shocking tackle, and the reaction around me was telling.

The Elche fans dotted about, who weren’t in the packed out away end on the other side of the ground, fell silent, whilst the Levante fans were up in arms.

“Puta madre! Joder!” and other Spanish insults were screeched at the midfielder, and this ignited the players on the pitch, who caused a bit of a scuffle until Gumbau headed down the tunnel.

Between a few injuries, the goals, the red cards and Martin Caceres – yes, that one – rolling around on the ground for a while, there were eight minutes of added time, and Gonzalo Melero added a third goal to round off the complete performance.

The scarves were being waved, the fans were singing and the players were in dreamland. Levante had won at home for just the second time all season, and playing like that, a miracle comeback to stay up cannot be ruled out.

Getting out of the ground was easy enough, and I headed to one of the many bars within mere minutes of the turnstiles for a full-time pint. Most in the ground did the same.

It was 11 o’clock on a Friday night and the team had won 3-0. It doesn’t get much better than that.

Eventually leaving the area to make my way home, the faint chants of “Vamos Levante, vamos campeones” could still be heard in the distance.

It was just 90 minutes, but the game had given those watching a renewed sense of optimism for the rest of the season.