Away Days: Steel, Scamacca, pepper spray and 8% beer at Anderlecht 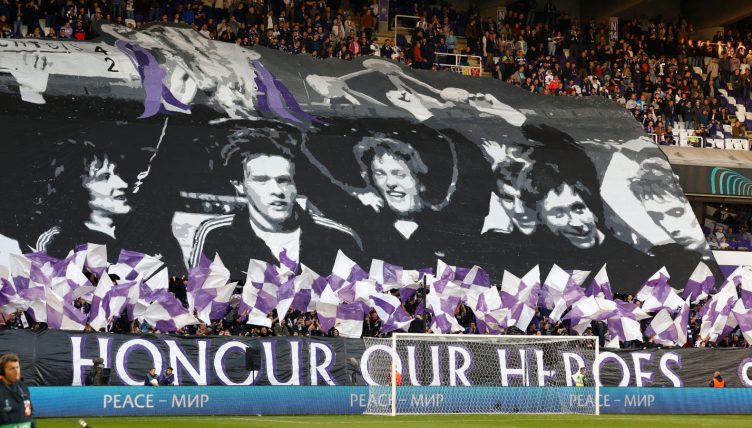 It was over in less than a minute.

Standing in the middle of a thousand kettled West Ham fans in a Brussels suburb, after watching David Moyes’ side squeeze out a 1-0 victory over Anderlecht, I felt the most irresistible urge to sneeze. The first was followed by a second, a third and a fourth in quick succession.

Simultaneously, my nose began tingling while an undetectable, yet bitter, taste began forming in my mouth. Despite the street being lit solely through moonlight, a quick glance was enough to ascertain that my experience was far from unique.

The moment passed. As the crowd began to shuffle towards the nearest train station, at a speed that’d cause a sloth to check his watch impatiently, me and my dad tried to work out what the eff had just happened.

But the truth didn’t take long to reveal itself; we’d been pepper sprayed by the Belgian police. Our crime? Being an English football supporter in a foreign country.

Before arriving in Belgium, Brussels was something of a blank slate to me; its mere name is enough to conjure an image of a frothing patriot bemoaning European regulation of our bananas or some other bollocks but the Belgian capital never quite cemented a reputation for being a must-visit city.

Perhaps it’s my own ignorance but places like Bruge and Liege, with their chocolate-box squares and dedication to gluttonous food, have always felt like more natural tourist destinations.

But, then again, Belgium is a country with a somewhat unfair reputation for boring Eurocracy and rain.

Trapped between France, Germany and the Netherlands, with Great Britain hovering ominously off the coast, Belgium has historically played the role of neutral battleground for Europe’s big beasts to thrash out their imperial differences.

Indeed, my last visit to the country was a school trip to the cemeteries of Ypres as a spotty teenager. But, after spending an hour or so in the Delirium Cafe near the Grand Place, a more enlightened view of Belgium began to emerge. Or perhaps it was the 8% beer on an empty stomach.

And, if Belgium is known for anything these days, it’s for a Golden Generation of footballers that have become household names in the Premier League.

Whether it’s a pinpoint pass from Kevin de Bruyne, a bewitching dribble by Eden Hazard or a crafty elbow from Marouane Fellaini, Belgium have become established as one of the best sides in international football.

Not that it’s helped Anderlecht much.

The summer of 2019 was a momentous one for Belgium’s most successful football club. With the embarrassment of no European football for the first time in 56 years and unrest off the pitch, Anderlecht hired club legend Vincent Kompany as player-manager for the 2019-20 season.

It was the perfect alibi to hide the mismanagement of the club since it was taken over by billionaire and self-made man Marc Coucke, who left another first-division club Oostende for the Brussels heavyweight.

But, even though Anderlecht acquired big names such as Landry Dimata, Samir Nasri and Nacer Chadli alongside Kompany himself, the club finished a lowly eighth.

The previous two seasons have seen a slight improvement, fourth and third respectively, but only enough to qualify for the Europa Conference League – not good enough for a club that took rubbing shoulders with Manchester United and Real Madrid as an entitlement.

Anderlecht are no longer the Anderlecht of old. A club that had been one of Europe’s best in the 1980s, and had won the Belgian title 34 times, even finished below city rivals Union Saint Galloise last year and Kompany has since left for Burnley.

While traditional enemies Club Brugge have left Anderlecht choking on dust. While Anderlecht flail in mid-table, Brugge have won three out of three in the Champions League leaving no doubt over the identity of Belgium’s best side.

While Belgium’s international stars flaunt their talents abroad, the epicentre of Belgian football has moved from the capital to Brugge’s home region of West Flanders.

An institution that was once a synonym for classy footballers, a certain DNA of beautiful football, excellent youth players and a healthy touch of arrogance befitting their success has turned into a snake pit.

Even a church near the Constant Vanden Stock Stadium is boarded up with little sign of life. The decline feels irreversible.

Anderlecht’s home ground reveals itself suddenly; no floodlights or rising stands give the game away until you’re literally standing outside the Subbuteo-esque stadium. That or because there’s a distinct lack of crowds as we’ve arrived two hours early by mistake.

Thanks to a combination of my GCSE French, my dad’s cardigan and a complete absence of Stone Island, we’re able to sip beer outside a homely bar with Anderlecht fans nodding their heads to the Europop blaring from a nearby speaker.

Belgians are known for their love of pomme frites and their pre-match snack would be enough to floor a giant; a huge mystery-meat-filled baguette slathered in sauce with chips overflowing. Alas, I’m not hungry enough to attempt one nor am I brave enough for the escargots from a nearby burger van.

But it’s a pleasant way to file away the time as the autumn sun turns weaker by the minute. A less pleasant sight is the group of 20 black-shirted men rushing around trying to find English supporters to beat into a pulp.

And the away end is a travesty. With high fencing at the front and looming perspex screens to the side, a clear view of the goal just yards away is impossible and, with the nearby Belgian police dressed like RoboCop, it all feels like an unwelcome throwback to the 1980s.

The match itself – or what can be squinted through the steel – was a pleasant enough advert for the Europa Conference League. Anderlecht turn in a performance of commitment, enterprise and no little skill that leaves their mediocre league form seeming like a misprint.

But a much-changed West Ham, having acquired adequate squad depth one transfer window too late, are still the better of the two sides. Of their starters, Flynn Downes is a revelation in midfield with a knack of being on call like an attendant AA vehicle.

And, such is the landscape of modern European football, Moyes is able to bring starters for Brazil, England and Italy to tip the balance in the Hammers’ favour.

While the excellence of Declan Rice is well-documented, new signings Lucas Paqueta and Gianluca Scamacca are the more eye-catching. Paqueta combines samba footwork with the work ethic of a scurrying miner and is easily the most talented player on the pitch.

And Scamacca enjoys touches that are smoother than a mouthful of gelato. He scores the only goal of the game, a tidy finish after Paqueta unlocks the Anderlecht defence, and there’s time for an excellent save from Alphonso Areola to deny Anderlecht a share of the spoils.

A smooth move from the Hammers is finished off beautifully by Gianluca Scamacca 👏#UECL pic.twitter.com/pFTJxuQqnD

Both the goal and the final whistle are greeted by West Ham fans climbing on fences to taunt their Belgian counterparts. Their incessant drumming had caught the ire of one Mark Noble lookalike near me but it was hard to detect any genuine malice between the two warring factions.

Anderlecht were okay but they’re used to butting heads with Europe’s finest and their performance won’t be enough to stop envious eyes being cast towards Brugge.

There’s a reason Anderlecht are known as the ‘Manchester United of Belgium’ after all.

TRY A QUIZ: Can you name every Belgian to have scored in the Premier League?