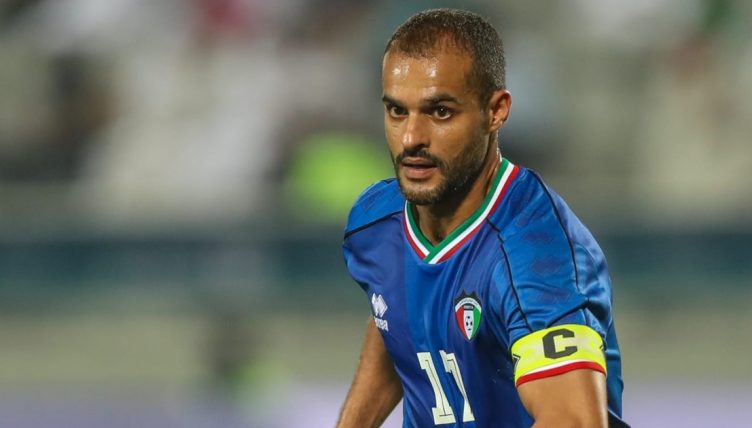 On 25 June this year, Bader al-Mutawa became the most capped male footballer of all time on his 185th appearance for Kuwait.

With 56 goals over an 18-year international career, the forward has been playing for a stupidly long time. His opponents over the years have included long-retired stars like Luis Figo, Ji-Sung Park and Tim Cahill. He deserves recognition.

But some people might have been unhappy about him breaking that record.

For example, we can’t imagine it went down well with the usurped record holder, Egyptian legend Ahmed Hassan, who retired in 2013 and won’t be adding to his 184 caps.

Nor should we forget 71-year-old Soh Chin Ann, a Malaysian former centre-back whose 195 caps — a would-be record — unfortunately include 24 Olympic appearances not recognised by FIFA. For him, the fireworks for Al-Mutawa would have stung.

And finally, curiously, there’s Cristiano Ronaldo, who currently trails Al-Mutawa by just six appearances. (It could have been five had he resisted the urge to remove his shirt against Ireland.)

Al-Mutawa and Ronaldo are both 36 years old. One will go down as one of the most celebrated players of all time; the other has spent 27 years and counting at the same Kuwaiti football club.

And yet the skilful and likeable Al-Mutawa, if he holds out a little longer, could go down in history as the man who out-footballed Ronaldo.

The dualistic universe is finely balanced between good and evil. You can see evidence of this everywhere, from ancient Egyptian religion to Star Wars.

So it’s not unreasonable to think that Bader al-Mutawa, born a mere 25 days before Cristiano Ronaldo, has a divine purpose: to prevent the ubiquitous Ronaldo from claiming yet another record, to eke out a few more appearances for the Kuwait national team and keep Ronaldo’s ego in check.

That might sound far-fetched, but there are a few important parallels between Al-Mutawa (good) and Ronaldo (no comment).

For instance, both made their professional debuts in 2002. Both then made their international debuts aged 18, wearing the No.17 jersey, in late summer 2003. In fact, Al-Mutawa’s goalscoring debut versus Singapore came just 15 days after Ronaldo’s bow against Kazakhstan.

And fate nearly led them to share a pitch.

Further comparisons can be made. While Ronaldo’s goalscoring exploits are unmatched, Al-Mutawa won the ‘IFFHS World’s Best International Goal Scorer’ award before the Portuguese did.

In 2010, the Kuwaiti legend bagged 17 non-domestic goals (10 for Kuwait plus seven for his club in the continental AFC Cup) — more than Samuel Eto’o and David Villa.

CR7 would later win the award in five different calendar years, but it was BAM17 who set the precedent.

Colonel of Kuwait & Sheriff of Nottingham

Admittedly, not everything Bader al-Mutawa does is a direct attack on the legacy of Cristiano Ronaldo. He’s got some pretty unique achievements of his own too.

For example, the goalscoring forward is presumably the only 100-cap footballer who is also an actual military colonel.

This is Bader Al-Mutawa on Military Job nowadays . He can’t play for Forest #nffc pic.twitter.com/6igV449Hst

He’s also basically a one-club man. Aside from two brief loan spells, to Qatar in 2007 and Saudi Arabia in 2011, Al-Mutawa has spent his entire professional career playing for Qadsia Sporting Club in Kuwait City.

It’s fair to say fans hold him in pretty high regard there. On 11 May, he put his colonel duties on hold to score his 300th goal for the club, seven minutes into stoppage time.

Although Kuwait is not a footballing powerhouse, an entire continent has recognised Al-Mutawa’s generational talent. In 2006 and 2010 (when he topped the international goalscoring charts), he was a finalist for the Asian Footballer of the Year award.

Weirdly, the prolific forward also has something of a reputation in… Nottingham.

That included the biggest talent of all, 27-year-old Al-Mutawa, who earned a one-month trial.

The Kuwaiti impressed supporters during pre-season, eventually gaining a cult-like status among diehards.

“The club’s reputation for attractive football is well known in the Middle East,” Al-Mutawa lied. “I realise that the English Championship has a tough standard of play, but I’m confident that my goalscoring and team-working skills will transfer.”

Enter the villain of the story: work permits.

Forest wanted Al-Mutawa, but the government wouldn’t sanction the deal. Forest instead signed Simon Cox from West Brom, who hasn’t won any international goalscoring trophies at all.

Rumours persisted for a year that the deal would be pushed through, but it never happened.

Whatever happens now, Bader Al-Mutawa will always have the achievement of breaking Ahmed Hassan’s record.

And of lobbing Jens Lehmann in a charity match.

But the big question is whether he can retain the appearances record for long, with Ronaldo (and, to a lesser extent, Sergio Ramos) still dominating international football and showing no signs of stopping.

Worryingly, Al-Mutawa has been absent from the Kuwait starting XI on a few occasions lately, suggesting his role may be diminishing with his advancing years. No matter how many protein shakes he drinks, he likely won’t maintain a Ronaldo-like level of fitness.

Cruelly for Al-Mutawa, the Kuwait national team was actually banned by FIFA for two years between 2015 and 2017, denying him the chance to take part in World Cup qualifiers and rack up caps. Were it not for that suspension, Al-Mutawa might already be the first double-centurion in men’s football.

The point of all this is that we can all agree, for one reason or another, that it would be good if Cristiano Ronaldo didn’t become the most capped male footballer of all time. He’s already the top goalscorer. And an insufferable prick.

So all we can do now is hope and pray, together: Forest fans, Kuwaitis, Qadsia ultras, Messi stans. Let’s support Bader Al-Mutawa. Let’s have a record holder we can we proud of.

What happened to the three Thai players Shinawatra signed for City?