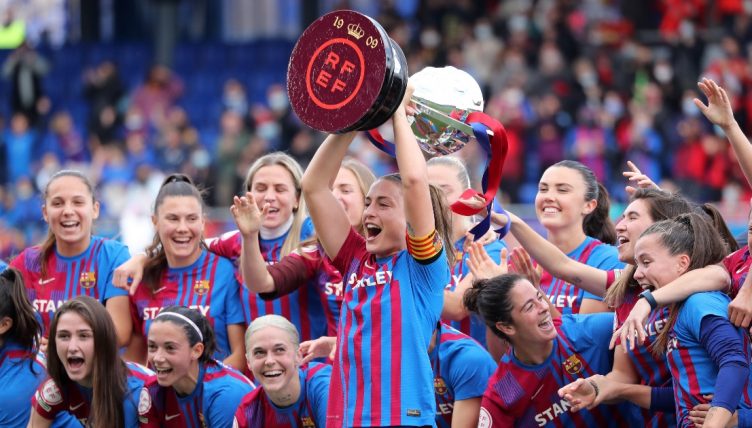 With six matchdays to go.

With a goal difference of 130, it is safe to say that there is dominance. And then there is Barcelona.

Their capabilities go beyond the league. They easily topped their Champions League group, brushing aside Arsenal and Hoffenheim to breeze into the quarter-finals. They face Real Madrid tomorrow for the first leg, the team they thumped 5-0 just last week to win the league.

Having already won the Supercopa de Espana, the club are aiming for an unprecedented quadruple as an attempt to one-up last season’s treble. The quadruple would be a feat that no other Spanish club has accomplished.

Last season’s treble included winning the club’s first-ever UEFA Women’s Champions League. Saying that they beat Chelsea in the final would be an understatement as the eventual champions humbled the English club, scoring four goals in the first 36 minutes.

🗓 A week ago today Barcelona were crowned #UWCL Champions!

Barcelona’s rise really is nothing short of remarkable. It was only a few years ago Olympique Lyonnais were widely considered the best women’s football team in the world.

The Spanish giants have made it look easy, but anyone at the club will tell you that the process of becoming the best team in the world was anything but.

In fact, the club hasn’t even been professional for a full decade yet.

Back in 2010, the idea of the board even becoming involved was laughable.

“The first thing I did was go to pre-season camp. I went to visit the coach and his second coach,” Jodi Mestre, former vice-president of the club, recalled about a visit back in 2010.

“When they saw me, they were looking at me with a strange face. ‘What is he doing here? A member of the board, here, in the middle of nothing?’

“Nobody knew and nobody spoke – no members, no board, no media – about the womens’ team.”

That attitude slowly started to shift as the club began to prioritise building a successful women’s side.

When she first signed, several players had second jobs because their wages were not enough to sustain a living. Those who didn’t work attended school, which meant that the few training sessions they had took place at night.

But more importantly, it meant players were allowed to prioritise their football, and further develop their careers as professionals.

Players were finally able to train together during the day with a complete coaching staff, they had unlimited access to fully equipped medical services, and were given the freedom to utilise all the state of the art facilities provided at the Ciutat Esportiva Joan Gamper training ground.

Success though did not come right away. Though that was to be expected.

The board were adamant that the men’s team would not be used as a way to fast-track any growth. Instead, the club wanted to build a team that was “distinctively Barcelona,” said Markel Zubizarreta, Barcelona’s general manager of women’s football.

That meant stagnation for a while.

It meant finishing second in the league four years in a row, three times to rivals, Atletico Madrid. And it meant falling short in the UEFA Women’s Champions League as well, from getting knocked out in the quarters and semi-finals to finally making the final in 2019, only to get thrashed by Lyon 4-1.

The defeat really highlighted the lack of competitiveness in Spain. Barcelona weren’t necessarily winning trophies, but at least they could keep up the pace. The Champions League final cemented that other countries’ women’s teams were more technically skilled, faster, stronger, and much more tactically flexible.

After that defeat in 2019, the board knew that if they wanted to reach the pinnacle of women’s football that Lyon had, more investment was needed.

A couple more players were added, but there was a focus on conditioning experts and bringing in a more experienced coaching staff that could elevate the team.

Two years after the Lyon defeat, Barcelona, who were coached by Lluis Cortes, went about business and dismantled Chelsea in the final, their victory mirroring their defeat from the past.

“For several years they have been showing us the way with how they play, how they compete and the hunger they have despite winning everything last year. We have been watching them and it’s a wonder to see them play.

“They are leading the way in the same way as the Dream Team did in their day or as Pep’s Barca side did later. They are an example for the men’s team.”

And while the end goal when they professionalised themselves back in 2015 was to win the Champions League, the hard work has not stopped.

As mentioned previously, the hunt for the quadruple is in full swing, and the club has refused to let any off-field drama affect their performances.

Current head coach Jonatan Giraldez was hired in the summer of 2021, mere days after Cortes unexpectedly left the club.

Cortes, who now manages the Ukraine women’s national team, led Barca to a treble last season, and the style of play in which he had the team playing hailed him as one of the best managers in the women’s game.

Despite taking Barcelona to new heights, he left due to reports that he had a strained relationship with several players.

Cortes leaving was undoubtedly a loss, but the board was adamant that his resignation would not hinder the team’s legacy, which is why Giraldez was hired, one of Cortes’ assistants during his tenure.

“To coach here the mentality has to be to win every game,” Giraldez said. “I have gained a lot of experience in the last two and a half years. At an elite club you learn from the best. I have developed and perfected my idea.”

Zubizarreta revealed Giraldez had been selected due to his ability to continue the club’s successful project.

“What was important was to continue with the sports project we have been working with for a long time,” said Zubizarreta.

“Jonatan is one of the architects of the game model that has been implementing the team and the idea was to give continuity.

“He is young, he is ready, he has a lot of desire to do things for the team and the club and I am convinced that he will keep the team growing.”

And so far, Zubizarreta has been correct. Giraldez has clearly been able to continue on with the success.

How he approaches coaching, and his mentality is best summed by his thoughts on how he demands the absolute best from his players every week.

“You can win, 8-0, and still have a lot of things to improve. My job is to detect what we have done badly and modify it. It is about improving every detail,” he said.

Improving the finer details. That’s what this Barcelona team has always been about.

It’s what makes them the best in the world.