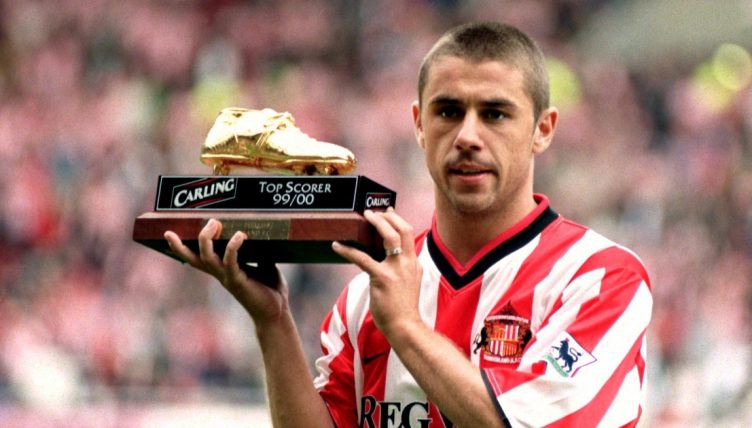 Younger readers may find it hard to believe, but in 2000 the top-scoring striker in Europe played not for Real Madrid or Manchester United but for Sunderland.

That player was Kevin Phillips.

Captured from Watford in 1997 for a modest £650,000, within three years Phillips would be crowned as the continent’s most deadly goal-getter as 30 goals in his debut Premier League season earned him the European Golden Boot.

It’s one of football’s most romantic, Roy of the Rovers-style tales but, as so often happens with any tale not involving one of the game’s most famous clubs or players, it has become somewhat lost to time.

“If I were to harp on about it I think people might say I was being picky,” Phillips says. “But let’s put it this way: If an English player scored 30 goals now, they’d get themselves a massive move and be on God-knows-what. They’d be all over the world.

“I thought it was a hell of an achievement. No disrespect, but generally when players score 30 goals, they are doing it in a team who are in the top two, three, or four in the league.

“I did it in a team that finished seventh, in a team that – and I love Sunderland, they’re dear to my heart – are not fashionable compared to Man United, Arsenal, Liverpool and so on.

“So I think that made the achievement even better. To have received the Golden Boot in the whole of Europe as well, it’s never been beaten [since, by an English striker], and I don’t think it ever will when you have the likes of Messi and Ronaldo and Neymar.

“It goes under the radar and doesn’t really get mentioned, but within my household I’m certainly very proud of it!”

Making the step up

While Phillips was not a big name when he made his Premier League debut, it’s fair to say that Sunderland expected big things of him.

The diminutive striker had already plundered 60 goals in two glorious Championship seasons on Wearside – 35 in his first season and 25 in an injury-hit second – and his raw energy and enthusiasm had also reignited the career of strike partner Niall Quinn.

Phillips, though, says he went into his debut top-flight campaign not knowing if he’d be able to cut it

“I was feeling quite apprehensive, quite nervous, because although I’d scored a lot of goals going into the Premier League, it’s a big step up from the Championship.

“You’re pitting your wits against some of the very best, not just in Europe, but in the world. You sort of question yourself: Can I produce?

A #PLMoment to remember for @SunderlandAFC, courtesy of Niall Quinn and Kevin Phillips 🔴⚪️ pic.twitter.com/C9iSlXrQtP

“Because I had scored so many goals in those first two seasons, I think people didn’t really think I ever missed. I wouldn’t say I missed loads, but I would’ve missed a fair few.

“The biggest thing is that when you’re part of a team that’s full of confidence, which we were in my first two seasons, you knew that if I missed one (chance) there’d be another one coming along very shortly.

“So you never got anxious, you never snatched at the first one, you just knew that you could be relaxed and if you missed it didn’t matter – I’d get another chance in the next 10 minutes.

“But the Premier League is a different ball game. You generally only get one or two opportunities in a game and really you need to try and take one. That season, I managed to take a fair few.

“I think the biggest thing was wondering if we’d create enough opportunities in the Premier League.

“I’ve never ever doubted my own confidence, my self-belief, but when it’s a big jump and you’ve only had a couple of years in the Championship it was a big step.”

An opening day 4-0 walloping at the hands of Chelsea at Stamford Bridge certainly didn’t help matters. It was a game now famous for Gus Poyet’s brilliant volleyed goal from Gianfranco Zola’s scooped through-ball, but it threatened to stop Phillips before he’d even begun.

“I think it was so important, for any striker when you go into a new league or to a new club, that I got off the mark pretty quick,” he says.

“So I was quite fortunate, although we took a good hammering in the first game, that I got myself a couple in our second game against Watford to set me on my way.

“It was a midweek game, pretty soon after the Chelsea game, so we didn’t have a long time to dwell on that result and our welcome to the Premier League. 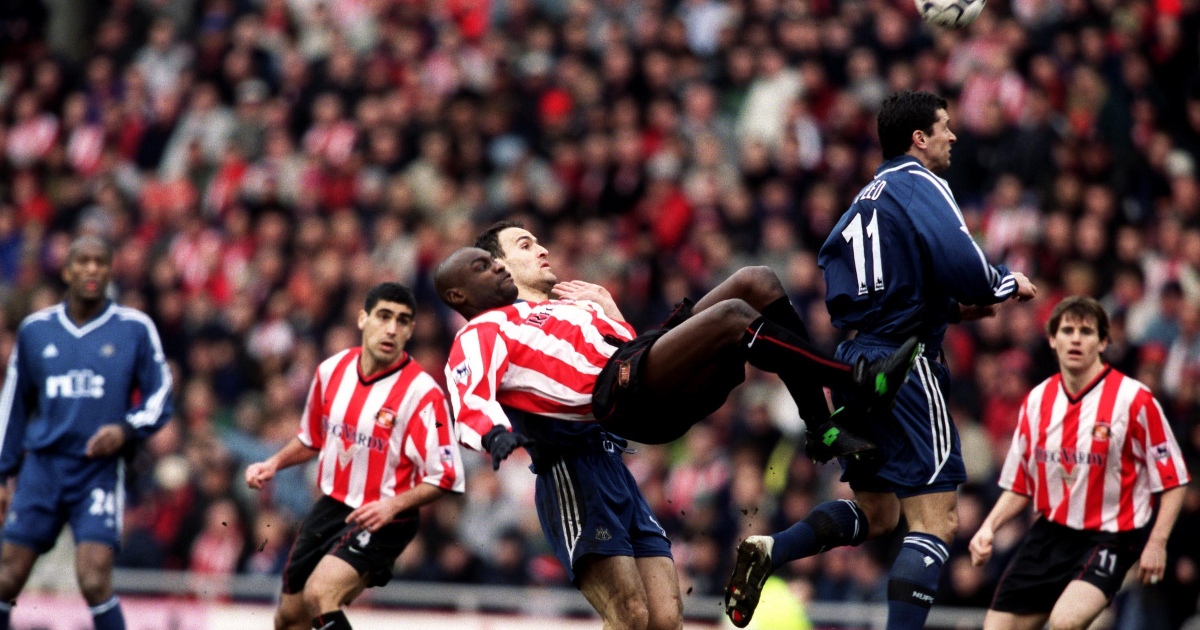 READ: When Sunderland signed Africa’s best player… but he left for Gaddafi

“Collectively we needed a result and to get some points on the board, but from a personal point of view, to shut anybody up or quiet anybody down – people who were doubting whether I could score in the Premier League, and there was a fair few – it was important to get off the mark.

“Going into Christmas I think I’d got to 18 or 19 goals, and even today that’s a hell of an achievement for any striker. So what I reached that target I thought: ‘Blimey, I can go on and maybe set a record in the Premier League’.

“I certainly thought I had a really good opportunity to get to that 30-goal mark.

“You’d have to say that the second part of the season, defenders paid a lot more attention to myself and it became a little bit more difficult.”

Phillips, though, although the undoubted star of the show, was not doing it alone. It was his name most often on the scoresheet, but he quickly came to share top-billing with Quinn.

Quinn, the future owner and chairman of the Black Cats, was all but washed up before Phillips’ arrival. With his knees starting to feel the strain, Quinn was looking at a quiet end to his career in Malaysia before being persuaded by Peter Reid to become Sunderland’s record signing after City’s relegation.

Quinn cost twice as much as Phillips did, and arrived a year earlier, but a serious injury early in his Sunderland career had him contemplating retirement, such was his disillusionment with the game.

Remarkable, then, that a partnership that would eventually come to define his career was still to come – and Phillips is right at the head of the queue for making sure Quinn gets his share of the credit.

“I’d be lying if I said he didn’t have a major influence,” Phillips says.

“You ask Quinny, you ask any striker, no matter how much a partner does for you, at the end of the day the hardest part is putting the ball in the back of the net. You still need to have the faith in your own ability and the confidence, the composure to actually finish.

“But your striker partner can do a lot towards that, can create an awful lot of opportunities, create a lot of diversions trying to pull someone out of their position for me to run into, flicking it on…

“It was one of those partnerships that just happened. We never worked on it in training. All Peter Reid would ever say was just: ‘Work off Quinny, get around Quinny’.

“His legs weren’t what they were when he was younger so he wasn’t going to do the running that I could do, so it was just one of those that worked.

“He occupied centre-halves while I just tried to nip in behind them when the ball was flicked on.

“You’d have to say that as time went on, teams began to work that out and really shored it up against us, but in that first season they couldn’t live with us.

A change in approach

Phillips was far from a one-season wonder, scoring 19 goals in his second Premier League season, but some who watched him say his game changed, possibly in pursuit of an England career.

Alan Shearer very much ruled the roost for the national side around that time, and Kevin Keegan was looking for a Teddy Sheringham type to partner him.

However, Phillips says he “didn’t deliberately” change his game.

“I think I was doing it subconsciously, but sometimes it’s hard to get out of that,” he says.

“The chances weren’t coming as well as they were before so naturally, and I see it now that I’m in the coaching side of football, when a striker isn’t getting as much of the ball they come searching for it.

“You just want to try to get a touch. I should have been playing on that last man, but you don’t want to come off the pitch if you’ve lost a game and think you haven’t done anything.

“But I wasn’t the kind of player who could come 15-20 metres back, get it and run at people, take people on and score goals.

“I was more of a link man, getting in behind and on the end of through-balls and crosses.”

Those memories of his greatest season still remain with him, though, with two particular standout goals.

“The Newcastle goal was right up there, just for the significance of it away at St James’ (the winner in a 2-1 Sunderland win), but I think the 25-yard dipping volley against Chelsea was my favourite.

“It was at home, a full house, and it was revenge after what Chelsea did to us in the opening game of the season.

“That was a hell of a day because of who it was against and the calibre of player it was against, and the performance that day I’d say even now is one of the best Sunderland have ever produced. It was a joy to be a part of.”

RETRO GOAL: A humdinger from Kevin Phillips for Sunderland vs Chelsea #OnThisDay in 1999.

He was absolutely lethal that season. Every time he sneezed the ball went in the top corner.pic.twitter.com/QTzMPy9LZg

Demise of the front two

Phillips has seen strike partnerships virtually disappear from the game since he finished playing and started out as a coach, but it’s something he would love to see more of.

“When we were playing well and I was doing what I was doing, playing as a lone striker was unheard of,” he says.

“I got asked to play it a few times and I was like: ‘You’re joking, aren’t you?!’ I couldn’t envisage playing up top on my own against two big dirty centre-halves.

“When you look through the Premier League now there’s not an awful lot of partnerships and it’s a shame. I always think that if you have two strikers on the pitch you have double the chance of scoring.

“I’d love to see it come back. Managers are almost scared to put a second striker up there because sometimes you can get overrun in midfield, but if you get the right kind of midfield players you can certainly afford to do that.

“When I was playing at Sunderland, the majority of the league were playing 4-4-2, so centre-halves knew how to deal with two strikers. If one [striker] went short, one [centre-half] could go in tight while the other followed his partner. It was simple.

“Nowadays, when you’re only marking one player it’s a lot easier because lone strikers tend to come towards the ball anyway and the runners are from midfield, which are easier for centre-halves to track because they can see them coming.

“You ask any defender – it’s a lot easier to play against one striker than it is two.”