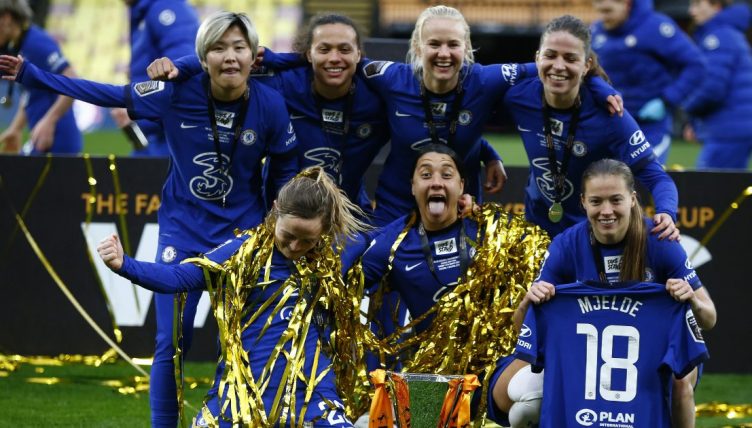 Chelsea Women may have fallen short of their dream of taking the quadruple, but make no mistake: the Blues have excelled this season, even by their own standards.

The west London side had a point to prove after they only narrowly pipped Manchester City to the WSL trophy on a points-per-game basis at the close of last year’s interrupted season.

This time around, Emma Hayes’ players took delight in settling things on the pitch, and it was with a joyful finesse that Chelsea claimed the crown for the fourth time, becoming the champions of champions, with more WSL titles than any other club. They also triumphed in the League Cup and Community Shield but agonisingly fell short in the Champions League final, losing to Barcelona.

Praised for their unity and work ethic, this particular Chelsea vintage is being hailed as one of the best teams in WSL history. Almost entirely unmatched in a number of areas, here’s the Blues’ blueprint for success this season:

If you want an idea of just how strong this Chelsea squad is, you need look no further than Beth England.

Most WSL managers would chop a limb off for the free-scoring Lioness, Chelsea’s star performer and top bagswoman last season; that she should have been found warming the bench even once is a testament to the wealth of talent often ahead of her in the queue. As it transpired, 14 of her 30 appearances in all competitions came as a substitute.

Fresh on the scene are standout internationals like German powerhouse Melanie Leupolz and Pernille Harder, officially women’s football’s MVP, whose combined experience has paid dividends on the pitch.

Golden Glove winner Ann-Katrin Berger similarly proved to be worth more than her weight in gold, keeping more than half of her sheets clean and pulling out that stunning save to snatch the title out of the clutches of chasing City.

An absolute beauty of a strike from @PernilleMHarder against Everton in November! 🤩 pic.twitter.com/urxZre3w1F

A touch of magic

Foremost of Chelsea’s premium personnel is the brilliant partnership playfully dubbed ‘Kerrby’, who have written themselves and their club into the WSL history books after assisting each other to score 12 times.

Both Sam Kerr and Fran Kirby struggled last season: fresh off the plane from Down Under, Kerr took some time settling into England, while Kirby’s pericarditis diagnosis threatened to make her unwelcome transfer to the sidelines permanent.

The stars aligned for the Blues this season as the players’ setbacks catapulted both into some of the finest form of their careers. Kerrby found their feet and they found each other, linking up as though they were born to play together. Some call it telepathy, some call it magic – whatever they’ve got, it sure works.

The destructive duo are beautifully symbolic of the bright future of England’s top flight: the backflipping international superstar finds synergy with the old guard, one of the WSL’s most experienced and loyal servants.

But it’s not just talent… hard work, holding your nerve and being your best while under the cosh are essential ingredients of this dominant force.

But these far-from-ideal circumstances were no match for Emma Hayes’ ‘mentality monsters’. Ten women? No problem. With their backs against the wall, her players showed stellar character and discipline to turn around the tie, strolling into the second leg with a two-goal lead.

And the Blues did it again in the semis, grinding out qualification after slipping up in the first leg against an out-of-form Bayern Munich. On home turf, they dug out the marauding performance they needed, shrugging off the albatross of consecutive semi-final exits and absolutely trouncing the German side 4-1.

Even after fighting their way out of a knockout tie, they didn’t rest up. With the WSL title yet to claim, Hayes had them back in training the very next day. No rest for champions.

And that brings us to the jewel in Chelsea’s gleaming coronet: the gorgeous guidance of peerless manager Emma Hayes. Let’s just say that if Hayes were a piece of heavy construction machinery she would be a steamroller, and if Chelsea are to be praised for their mentality, then it is made in her own irrepressible image.

This is a coach who stops at nothing to win, with infectious determination and a work ethic to shame a packhorse. She’s a caring character too, and the fight she has put up to get the best for her girls they have repaid tenfold.

Speaking to the press in the aftermath of the 4-1 victory that took Chelsea to the UWCL final, Hayes said: “I never had female role models. I’ve always wanted, more than anything else, for little girls to have their own.”

At Kingsmeadow, Hayes has surely forged some herself.