Bobby is back: Firmino is once again Liverpool’s master of space and time 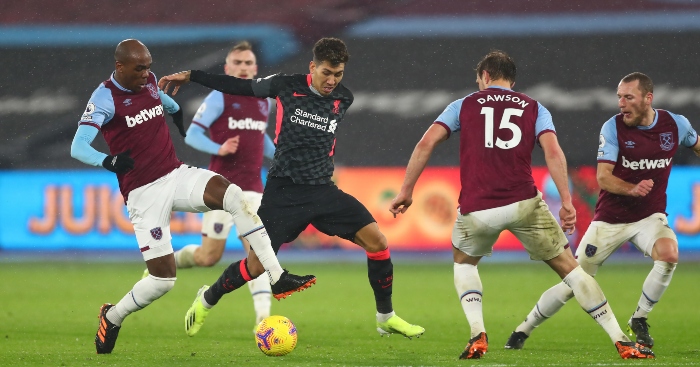 As the final whistle blew on Liverpool’s 3-1 win over West Ham on Sunday afternoon, Clinton Morrison was asked on Radio 5 Live not about Mo Salah’s magnificent finishes or about the impact of Curtis Jones but about Roberto Firmino.

Firmino had only played the final 21 minutes and Liverpool were already two up when he came on. But discussing his impact was irresistible. With six minutes to go, the Brazilian had set up a goal for Georginio Wijnaldum that, though uncomplicated in its execution, was a perfect example of why, when he is in form, Liverpool are just better.

Morrison’s response to the inquiry about Liverpool’s No.9 was simple, but in a single sentence he got to the crux of why Firmino excels; why what he does, and perhaps more pertinently, where he does it, is so effective.

“He drops off,” said Morrison, “and the defenders don’t know whether to follow him or not.”

It reminded me of a conversation I had had a few weeks prior with my grandad. As normal, our chat swiftly veered towards football. Yet rather than dwell on the fortunes of his beloved Barnsley, he brought up a game he was at almost 70 years ago.

It was a notable one: England 3-6 Hungary, the ‘Match of the Century‘. An afternoon, Brian Glanville wrote, that “gave eyes to the blind”.

A crowd of 105,000 watched on at Wembley as a magnificent Hungary front line – one that contained Ferenc Puskas, winner of five European Cups with Real Madrid, as well as flying wingers Zoltan Czibor and Sandor Kocsis – condemned England to their first-ever defeat to a non-home nation team on English soil.

Hungary ripped England to pieces. As Bobby Robson, England’s right-half that day, later said: “We saw a style of play, a system of play, that we had never seen before.”

And despite all the other talent on display, the man who embodied that system stole the show; Hungary’s No.9 Nandor Hidegkuti.

Hidegkuti scored three, including a brilliant strike in the first minute. But it was not the goals that my grandad recalled during our conversation. Instead, he said: “Hidegkuti moved all around the pitch, [England centre-half] Harry Johnston didn’t know whether to follow him or not.”

Hidegkuti was not the first withdrawn No.9. The consensus seems to be that Austria’s 1930s Wunderteam striker Matthias Sindelar did something similar prior to the Hungarian. But on that day it was a novel sight to an English audience, and it confused the living daylights out of the English defence.

With time, a lot of tactical innovations lose their element of surprise and thus their potency. Ways of combatting them are cooked up by the next generation of coaches looking for the strategic upper hand.

Yet the withdrawn centre-forward always returns. And when performed well by a player with the correct characteristics – and those characteristics are rare, which is perhaps why it remains effective – it can elevate a team.

The roll call is illustrious. Tostao for Brazil in 1970, Cruyff for Holland four years later. Totti for Roma around 2007, Messi for Barcelona from 2009 until 2012, and Fabregas for Spain at the Euros that summer.

Firmino walks the path they trod, and he walks it with grace and panache. When he is on his game, with Salah bursting past him on one side and Mane on the other, the Brazilian is the modern master of the role, an interpreter of space and time.

"That was Liverpool at their clinical best!"

He pushes onto the centre-halves before dropping just at the right moment to find the pockets between the lines. And with his velvet touch and 360-degree vision, he can control any rocket sent into him from the Liverpool midfield and redirect it un-fussily to those willing to run beyond.

After a low-key start to the season – a poor 2020, overall, in fact – Firmino has been wonderful again in recent weeks.

Despite Liverpool’s loss, he showed his ghost-like movement at Old Trafford in their FA Cup fourth-round tie with Manchester United, drifting back, turning and sliding in Mo Salah for the opener and providing again for Salah’s second.

At Tottenham four days later, the Brazilian demonstrated that intelligence can lead to goals, too. Bursting undetected from deep, marked by neither defender nor midfielder, he put Liverpool one up and moved into 20th on the club’s all-time top scorer list.

And against West Ham, he needed less than a quarter of the game to confirm that he is back to his best. Floating just outside the area – again in that nowhere space between defence and midfield – he received the ball back to goal, played a delightful one-two with Alex Oxlade-Chamberlain and proceeded to selflessly put it on a plate for Wijnaldum.

And if you’re tempted to describe his interpretation of the position as ‘false’, then bear in mind that one of its greatest ever exponents, Tostao, would urge you not to.

In that great team of the 1970 World Cup, Tostao, like Firmino, had players bursting beyond him: Pele to his left and Jairzinho to his right. And Tostao, like Firmino, was a grand master of vacating the penalty area at the perfect moment, leaving defenders discombobulated and his team-mates free to surge in and find the net.

Tostao’s career was cut short by an eye issue, which is why he never made it to another World Cup, but those weeks in the blazing Mexico sun were enough to burn him onto football’s collective consciousness.

After retiring, Tostao followed the natural career path for an ex-player, becoming a professor of medicine at a prestigious Brazilian university. Since packing in that second career in the late nineties, he has turned into the best football newspaper columnist in Brazil. And as he regularly writes, there’s nothing false about coming out of the area to receive the ball.

This is from 2019: “The best centre-forwards are those that, as well as being goal-scorers, have a lot of talent outside the area. They foresee plays, move out to receive the ball and, when the centre-backs come, the ball is already in the goal. Average centre-forwards love physical confrontation. It hides their technical limitations.

“What they call the ‘false nine’ is the true centre-forward, the one who knows how to play football.”

Sixty-eight years on from the Match of the Century, the withdrawn centre-forward is as effective as ever. Why? Well, because the defenders still don’t know whether to follow them.

Davies confirmed: The last six players Liverpool have signed from the EFL

Enough about Mo Salah’s first touch, we really need to talk about the second