Bournemouth have identified their problem & taken smart steps to solve it 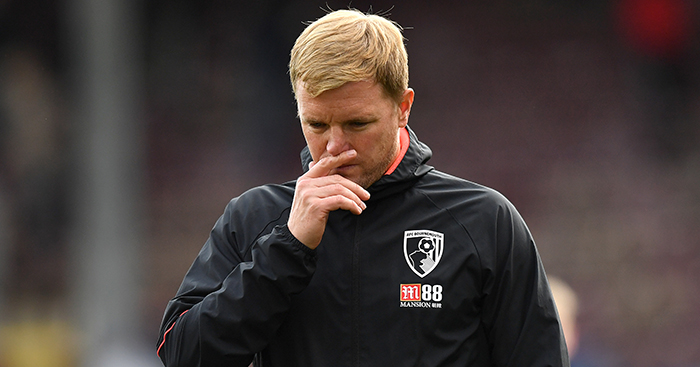 On reflection, one of the more alarming statistics from the 2018-19 Premier League season was the number of goals conceded by Bournemouth.

A slow start had been a feature of previous years so when they bounced out of the blocks in August, remaining unbeaten until September, it helped to create a good impression that lasted the rest of the campaign.

But the signs of a familiar weakness were there, even then. After beating Cardiff City to nil on the opening day, they’d have to wait until Southampton’s visit in October for their next clean sheet and, although a trip to dysfunctional Fulham would yield another the very next week, by the end of the year only Brighton had also been kept scoreless.

When the season finished, only Fulham and Huddersfield had conceded more goals than Bournemouth’s 70. It was their worst defensive performance since being promoted in 2015 and, ultimately, undermined a season in which the side had shown plenty of evolution in other areas.

It’s a troubling weakness and, to be blunt, an unwelcome complication in assessing just how good a manager Eddie Howe is. At one end of the pitch, Bournemouth have grown smarter and better, learning how to penetrate and punish teams with far more regularity. At the other, though, and in spite of investment in Nathan Ake and Asmir Begovic, they remain desperately fragile.

It’s a difficult problem to diagnose. The Begovic transfer hasn’t worked and Howe already seems to have moved on. But Ake has had several excellent seasons and represents an obvious individual improvement. And yet the sloppy goals remain.

It’s alarming, for instance, that so many teams are able to score against Bournemouth in similar ways: by cutting a pass into the box, creating displacement among their centre-halves, and then capitalising on a central chance. Or by working the ball down one of the flanks and taking advantage of a positioning error to fashion a simple opportunity.

The general impression is of a team who defend chaotically. In itself, that’s maddening, because Bournemouth are capable of playing with tremendous discipline.

The 4-0 victory over Chelsea, while superficially a freak, demonstrated that perfectly. The scoreline may have been determined by a lethal counter-attack and by some excellent individual performances, but it was founded on an impressively rigid game plan.

Despite what the outcome suggested, for at least 45 minutes it was attack versus defence, with Chelsea camped around the hosts’ box, searching for a passing angle that would never appear.

It wasn’t desperate resistance, nor was it dependent on heroic goalkeeping; instead they survived that first half by methodically filling gaps and ushering their opposition into areas from which they couldn’t create.

It was their weakness manifesting as a strength and, along with everything else that happened that night, it posed a teasing question: what could Bournemouth be if they found a cure for this problem?

Hopefully that’s a question soon to be answered. With their understated transfer policy, they’re a club that attracts little attention during the summer. They have, however, moved smartly, adding full-backs Lloyd Kelly and Jack Stacey from Bristol City and Luton Town respectively.

The suspicion until now, perhaps, has been that Howe has done as much as he can with the players with whom he won promotion.

In some case that hasn’t been problematic. Callum Wilson has become much more efficient with the ball and Ryan Fraser has grown into an extremely dynamic threat. But in other instances it’s been more prohibitive, manifesting most often in a porous defence.

That group can be characterised by struggle. In comparison to Ake, for instance, they make Premier League life look like very hard work. They’re not athletically gifted in the same way, and the survival instincts (reaction speed, awareness) that are prerequisites at that level don’t come quite as easily to them.

That’s a terribly damning assessment. It’s one that any supporter would likely hate. Understandably, too, because that group of hold-overs has achieved well beyond their assumed potential and deserve great respect for finding a steady footing in the Premier League.

But it’s still much too easy to draw a straight line between Bournemouth’s goals-against column, the flaws with which it’s associated, and the stress of too many players having to maintain a level beyond what their natural abilities should allow.

Over the course of a season, that’s just not sustainable. Even across 90 minutes, that’s the kind of strain which will inevitably result in mistakes. No matter how fine the strategy is or how diligent the preparation has been.

Maybe Howe recognises that, too. After all, including the acquisition of Chris Mepham seven months ago, he has reinforced three of his defensive positions within half a season. That indicates a desire for softer clay and for a younger, more pliable group of footballers who can be adapted to solve this ongoing problem.

Of the two during the current window, the signing of left-back Kelly makes that point most clearly. He’s a gifted player. Elegant on the ball, athletically impressive with and without it, and physical enough to be a defensive asset.

His profile represents an obvious attempt to purge Bournemouth’s inferiority in those positions. He won’t turn 21 until October, and having been involved with the England age-group teams for some time, he radiates a healthy kind of self-assuredness. He knows he’s a good player.

In one sense, yes, that’s the kind of hopeless intangible that means pricelessly nothing. But it’s also a broad encapsulation of the attributes that Bournemouth’s defence desperately needs.

Composure, entitlement, confidence; in the right doses, that could be the mastic that closes these inexplicable cracks. It might be that simple.

Ryan Garry: From playing for Arsenal’s Invincibles but retiring at 27