Recently I had the pleasure of discovering an old article written by Louis Theroux which began with the immortal line: “I’ve seen the future and it’s shit.”

The dripping cynicism of that introduction made me howl with laughter, but…well, here’s the thing: I have seen the future, and it is shit.

When I booked my trip to America at the turn of the year, the logic was simple: New York – Seattle – Portland; two weeks, three matches, back to England just in time for Leeds United’s play-off campaign.

Thankfully, there are a number of positives. A ticket for the ‘Ultras’ section was fairly cheap, so I can stand on the bleachers and drink beer in the most atmospheric part of the ground for a little over £20. It also gives me the chance to chat to a Peruvian man about Nobby Solano for possibly a longer amount of time than he found comfortable.

Then there’s the presence of David Villa, immediately showing his class in the warm-up by lashing his first shot into the bottom corner before proceeding to try and chip the City goalkeeper at every other opportunity.

Within minutes of the game getting underway, a suave-looking Patrick Vieira watches from the sideline as Villa torments the Dallas defence down the left flank and creates the opening goal. 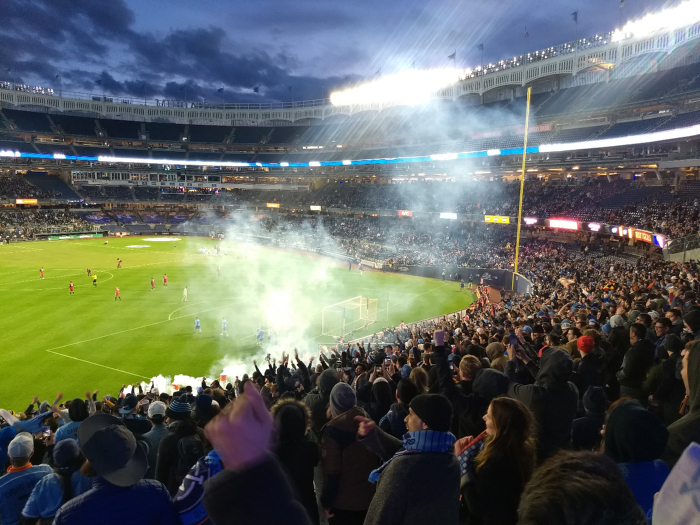 The clock has only just reached 10 minutes when visiting attacker Santiago Mosquera is played through on goal and equalises. We’ve got a game on our hands.

Sadly any noise generated from the local support is being constantly drowned out by the rhythmless thud of the drums, which means neither the players can react to any increased intensity from the terraces nor vice versa.

Instead the match descends into a sticky sludge of sloppy first touches and loose passes, but on the stroke of half-time the crowd are awoken. “VAR! VAR! VAR!” they chant, as a penalty is awarded for what looks like a harsh handball decision.

Feeling like a philistine, it all leaves me a bit cold. Villa converts for his 400th career goal.

The second half largely follows the same pattern. With 10 minutes to go, freezing, I begin to head for the exit, only to be halted by the sight of Villa embarking on a mazy run.

The ball somehow ends in the back of the net, a cocktail of Bud Light and flares fills the sky and suddenly the cool evening air feels much warmer. The American Dream is still alive after all.

Fast forward one week and I’m stood in a Seattle bar on my way to CenturyLink Field. The quality of football I saw in the Big Apple is put into context as City find themselves 2-0 down after only four minutes on their way to being thrashed by the Red Bulls in the New York derby.

I’ve only heard good things about a Seattle Sounders matchday, reflecting what has so far been a painfully cool city, and the atmosphere on the walk to the ground leaves me hopeful.

There’s also the added bonus of potentially seeing former Leeds striker Mike Grella make an appearance off the bench for Columbus – memories of his extra-time brace to see off Kettering in a FA Cup replay come flooding back and I yearn for a glimpse of the little blonde-haired forward.

If the spectacle in New York was underwhelming, this is nothing short of a disaster. VAR sees Columbus striker Pedro Santos sent off early on, and neither side seem particularly arsed about trying to win. 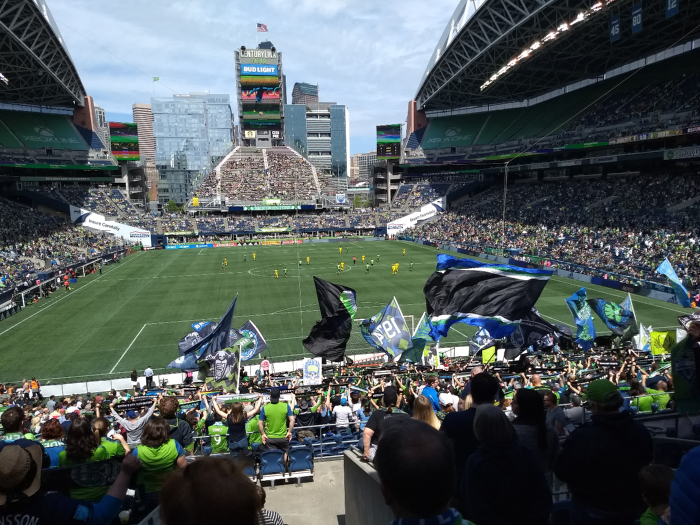 Clint Dempsey creaks around up front for the hosts, attempting to overhead kick the two half chances which fall his way. Neither trouble the goalkeeper. The early red card also means Grella will spend the entire match on the bench.

Yet again any noise generated from the healthy support is drowned out, this time by a number of hype men on raised platforms whose loudspeakers crackle over the chants.

Midway through the second half, I have quite a bleak realisation. It’s not the quality of football which is irritating me – I support Leeds FFS – but rather the fact that everyone seems…happy.

No away fans mean there is no tension or back-and-forth in the ground. Rather than an afternoon filled with fear and loathing, it is instead a pleasant afternoon out at the soccer.

In the country where it’s the winning, not the taking part, which counts, everybody seems more than content to watch a turgid goalless draw play out. I miss Elland Road and all it’s miserable, beautiful angst.

Currently experienced one and a half MLS games and nobody is miserable, nobody is angry and everybody seems to be genuinely enthusiastic about being here. It's absolutely awful.

Between the matches there is at least the joy of exploring a country which – Donald Trumpness aside – remains pretty special. After a train journey overlooking a landscape which is a cross between Stand By Me and Twin Peaks, I arrive in Portland ready for one last crack at MLS.

A city which is completely at ease with itself, surrounded by forest-wrapped hills, clear blue skies and gleaming rivers, by the time the match rolls around, I’m back in optimistic mood – especially after breakfast at The Toffee Club, whose owner has definitely read Mundial Mag once.

There is also one big positive: Portland Timbers are facing Seattle Sounders. A derby. Away fans. Atmosphere.

But then there is a big negative: Portland Timbers are facing Seattle Sounders, who have already ruined my afternoon once.

The stars are starting to align, however. There is a craft brewery just around the corner, and when I enter Providence Park the man behind the bar gives me a free pint as the pump runs out with the plastic cup almost full anyway. 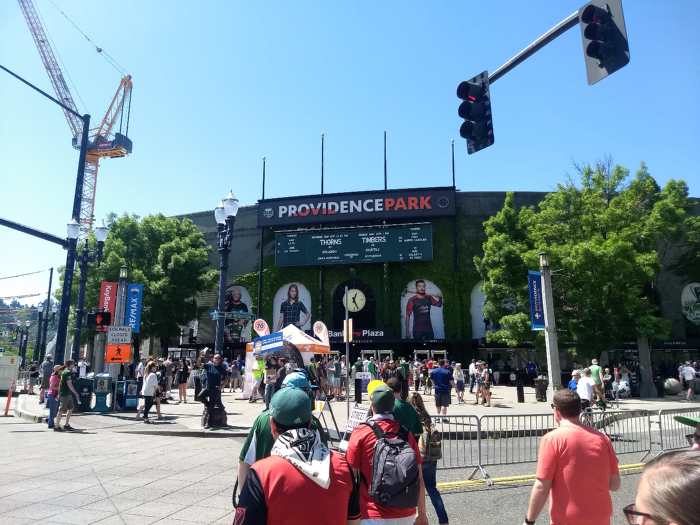 The ‘Timbers Army’ section of the ground is pretty much full when I ascend the stairs to try find a place to stand, but a kindly middle-aged couple point out a spot next to them and regale me with tales of Portland’s best players.

Before long, the polite, sweet lady suddenly begins to harmlessly – I think – bellow: “Build a bonfire, build a bonfire, put Seattle on the top, put Vancouver in the middle and we’ll burn the fucking lot.”

While the actual match may fail to ignite, for the first time since crossing the Atlantic the fans are louder than any manufactured means of making noise.

My mood is only lifted further at half-time, when the card machine at the bar stops working and three people jump in to pay for my beer since I don’t have any cash.

As the clock ticks down, the only disappointment is that there is yet to be a goal. It has been nearly 180 minutes since I last saw a ball hit the back of the net and Dempsey is once again not helping matters by barely moving for the visitors.

I’m not even sure how it happens, but with four minutes to go, the ball somehow breaks to a Portland attacker inside the visitors’ penalty box.

Sebastian Blanco is in on goal, but Stefan Frei is moving swiftly off his line. Without taking a touch, the little Argentine delicately dinks the ball over the goalkeeper.

A goal! A winner! Strangers are hugging! I’m pissed! Away fans have their heads in their hands! There is a man at the front of the stand using a chainsaw to chop off a slice of a log in celebration! At last!

In his story The Fiesta in the Town of Ghosts, the brilliant American sportswriter Gary Smith ponders why we can’t help but watch boxing when the sight of seeing glorious champions reduced to knocked out bums is so galling.

After visiting Bolivia to observe a traditional fighting ritual, Smith comes to the conclusion that it is simply because two opponents going toe-to-toe, whatever the outcome, just makes us feel – something… anything.

As Portland close out the game to win their 100th meeting with Seattle and I awkwardly join in with a celebratory dance which has swept across the stand, it dawns on me that the exact same applies to football.

Perhaps the future isn’t so shit after all.