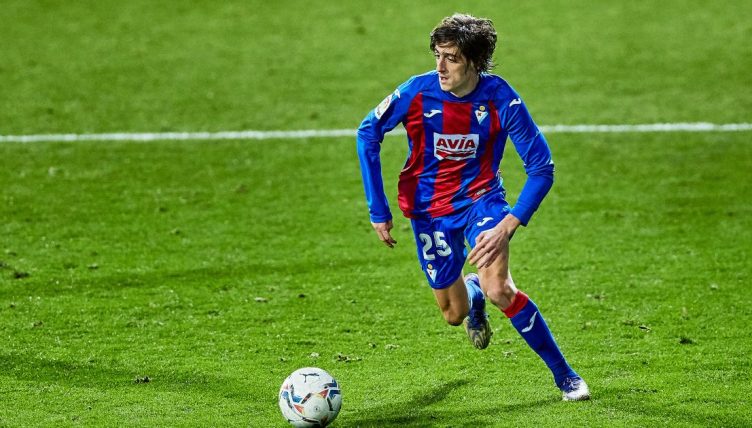 On Saturday afternoon, Eibar took the short coach ride to Bilbao for the Basque derby with Athletic. Away at the magnificent San Mames, it was never going to be a particularly easy task. But Eibar needed a win. Somehow, from somewhere.

Now in their seventh season in La Liga, the club from the small town of the same name are struggling. With 11 games of the season to go before the Athletic tie, they sat 19th in the league, a point behind Alaves in 18th and two behind Elche in the first spot outside the relegation zone. The battle against relegation is on and it’ll likely remain that way until the end of the campaign.

Yet as they looked for three points to boost their chances of survival, they suffered an early blow. Yuri Berchiche met a cross in the middle of the box and, with a flying volley, hammered it goalwards beyond the helpless Marko Dmitrovic. “Golazo” shouted the Spanish TV commentator. 1-0 Athletic.

Soon, though Eibar had pulled it back. Ex-Middlesbrough man Kike Garcia pressed Atheltic’s Unai Lopez into an error and took full advantage, slotting it home to level the scores.

From there, both teams pushed for a winner. Athletic because drawing at home to Eibar is not a great look. Eibar because they had no choice. If the winner was going to come for the away side though, there was only going to be one source.

Born in 2001, that source is little more than a child. He’s scrawny, he’s rugged, and he plays with the swagger of a street footballer that might pop up in a highlights video of an Argentinian Primera Division game from the mid-80s. He loves a nutmeg and he’s got a scouser’s moptop that makes him look like a young Ringo Starr.

Born in Barbate on Spain’s southern Atlantic coast, 20-year-old left-winger Gil is currently on loan at Eibar from the club where he grew up, Sevilla. And though his current side are struggling, he’s been lighting up La Liga this season.

Last week, a video was posted on social media of Gil overwhelmed with emotion, crying on Eibar’s training pitch. And for good reason. He had just received the news that he’d been called up to the Spain senior squad for the first time by Luis Enrique to play in this month’s World Cup qualifiers.

Today, Bryan Gil has become the first ever player to be called up for Spain's senior national team squad while playing for Eibar.

Here's the amazing moment at training when the club directors told him.pic.twitter.com/7HjwQELqo6

“[Getting called up] was a dream I shared with my grandfather,” Gil told Marca after the news. “I dedicate it to him.”

The call from Luis Enrique appeared to have injected Eibar’s young wide man with even more confidence than he normally plays with, too. With ten minutes to go before half time at San Mames on Saturday, he received a pass 10  yards inside the Athletic half, five yards from the right touchline and with only one thing on his mind.

A flying slide tackle came in from Yeray Alvarez, but Gil pulled the ball back towards himself as if it were attached to the other end a bit of elastic tied around his boot. He rode the challenge, jinked inside and was away.

He darted towards the middle, then went outside, then in again, leaving Mikel Vesga behind him. Finally another touch out of his feet made space for the shot. Unfortunately for Gil and Eibar it was a tame effort that trickled into the arms of Unai Simon. The scores remained level and stayed that way until the final whistle.

The boy done a madness. pic.twitter.com/G3u9eOY5Xw

Still, an away point is valuable currency at this point and it took them up to 18th. And in the scintillating bit of skill produced by their floppy-haired young winger, Eibar fans may have been able to see a route out of the pickle their team currently finds itself in.

It was a special passage of play, and, in part owing to the call-up, it featured heavily in Spanish media reports on the match. Yet as Gil’s international recognition suggests, this was far from the first time that he has produced the spectacular this season.

Gil, as alluded to, is something of a throwback. Despite popping up on the right against Athletic, he is mostly a left-winger and he takes the description of his position very seriously.

He hugs the touchline, gets chalk all over his boots, and loves two things: beating his man (preferably with a nutmeg) and getting the ball into the box. Only three players in La Liga have averaged more dribbles per match than Gil this season and you can guess who at least one of them is.

In terms of attacking output, Gil may not boast the best figures – just three goals and two assists this season. But the amount of goals he scores corresponds with the amount of time he spends out wide and if Eibar’s strikers were a little more alert, the second of those two numbers would certainly be higher.

Anyway, to focus on statistics when it comes to the young winger is to miss the point. It is the captivating work he does to destabilise the opposition that draws the eye, makes him an interesting option for Spain and gives credence to reports that Arsenal are tracking him and that Barcelona president Joan Laporta “is enamoured with him.”

Sevilla might have loaned him out to improve him, but if someone is prepared to meet his €35million release clause, then he might never make it back.

Spanish sports daily Marca broke the news that Gil had been called up to the national team with the headline, “The little Cruyff reaches the Spanish national team.” In the piece it said, “[Gil] resembles Cruyff not just in appearance but in the way he moves on the pitch as well.” It is about as high as praise comes in the Spanish press.

After Gil scored two in a game against Granada in January – helping Eibar to their first home win of the season – AS was equally effusive. “A star is born,” they wrote under the headline, “Bryan is the sensation of La Liga.”

After making his senior debut for Sevilla in the 2018-19 season, Gil played a few games for Sevilla side at the beginning of last term before going out on loan to Leganes for the second half of the campaign. There, he suffered relegation but also got a taste of regular first-team football and this season wanted to go somewhere where he could do so again and progress his game.

Though Eibar are struggling, he is managing to do just that, working alongside longtime Eibar coach Jose Luis Medilibar. Mendilibar worked with a young David Silva when he was on loan at Eibar early in his career, and the same experience seems to be paying off for Gil.

“[Mendilibar] is contributing a lot of things to my game that I did not expect,” Gil told Marca earlier this year.

“He’s made me feel important and has given me minutes in a top-flight team… Since the first day, Eibar and Mendilibar have put their faith in me and the national team call-up is down to the trust of the manager, my work and the efforts of my team-mates.”

“It would be a dream to represent Spain at the Euros,” he finished off.

But before then, Gil still has a way to go. First up are the three games Spain will play in this international break – World Cup qualifiers against Greece, Georgia and Kosovo.

He will be hoping that three games in such a short space of time means he’ll get some minutes on the pitch – and if he does, one imagines he’ll show the same confidence that he has with Eibar.

After that, the most important task: keeping his current club in the top tier. It won’t be easy, but if he can drag his team forwards like he did against Athletic, Gil stands a chance of sealing survival for Eibar and getting that dream call up for this summer’s long-awaited major tournament.