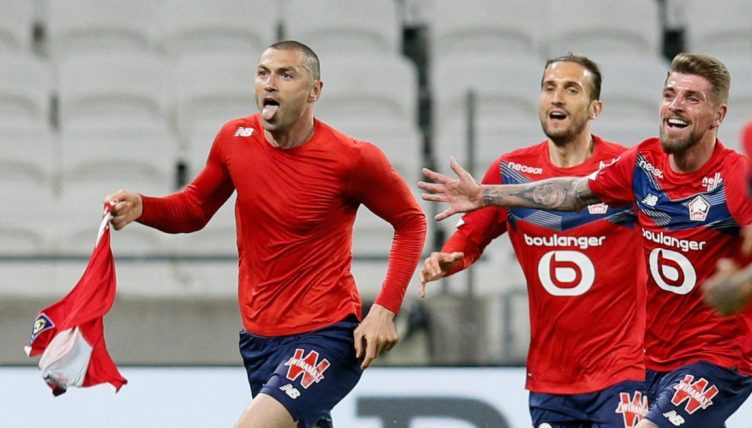 If you are a top-class centre-forward who has spent the entirety of your prime years banging in goals, earning good wages and winning trophies in the Super Lig and the Super League of Turkey and China, where do you go for a late-career sojourn?

There aren’t many options left. Even MLS is becoming an young man’s league now.

The answer, then, is to live your career in reverse. Or at least it is if you’re Burak Yilmaz.

After a decade and a half spent mostly in his homeland, bar a two-year interregnum in the Far East, the Turkey international centre-forward got the chance to move to a top-five European league with Lille in the summer of 2020, aged 35. That, of course, is not the order in which it is supposed to happen. But it is a chance Yilmaz is taking with both hands.

In a few weeks, he could be part of a Lille squad that fights to the front of a queue that includes Monaco, Lyon and PSG to take the club’s first league title in over a decade. If he is, his goals in a comeback victory over Lyon on Sunday, April 26, 2021, will be pinpointed as one of the key moments in a historic, heroic domestic campaign.

Yilmaz had an odd early career. The son of former goalkeeper Fikret Yilmaz, the big, bustling Burak was a star of the Antalyaspor youth system and of the Turkish national age group sides. By 20, he had led Antalyaspor to promotion to the Turkish top flight, earning himself four senior caps and a move to Istanbul giants Besiktas.

But his career stuttered. He struggled for goals and was moved out to Manisaspor. Another of Istanbul’s big three, Fenerbahce, then took a chance on him, but he failed to score one in a single season there and was loaned out again before finally being shifted to Trabzonspor as makeweight in a deal for Gokhan Unal.

It was only in Trabzon in 2010, aged 25, that his career finally took off. He scored for fun over two and a half seasons, including 33 in 31 league games in 2011-12, getting his big move to complete the Istanbul giant set at Galatasaray. This time the step up was taken easily. Two league titles followed over four seasons, as did more caps and goals for Turkey, and eventually a lucrative deal in China.

By the time he returned to Turkey after two seasons, he was already the wrong side of 30. But in three seasons, one and a half each at Trabzonspor and Besiktas, the goals continued to flow, despite repeated muscle injury problems.

Given his domestic scoring record and international achievements, it is little wonder they refer to him as ‘the King’ in his homeland. But when his contract ran out at Besiktas last year, few imagined the next step would be into the unknown of Ligue 1. He had been linked to clubs in Western Europe’s top leagues before. But now?

It was a risk, both for Lille and Yilmaz. Had Lille consulted the textbook of football club management, it would not have told them, one imagines, to replace their Napoli-bound, €80million, 21-year-old rising superstar centre-forward, top scorer and player of the season Victor Osimhen with an injury-prone, 35-year-old free agent.

Yilmaz too could surely have earned more and had a more comfortable existence elsewhere, not to mention the potential damage to a glittering professional reputation if the spell at Lille went pear-shaped. Fortunately for both, the move has proved a stroke of genius.

Despite another muscle injury that kept him out from January until March, Yilmaz has consistently displayed the importance of his battling hold up play and is Lille’s top league scorer with 12 goals in 24 Ligue 1 appearances, arriving at a rate of one every 144 minutes. In the Europa League, he managed two in just 76 minutes across four cameos from the bench.

As mentioned, the two most recent of those 12 league goals could prove the most decisive. Lille went into the weekend just gone top of the table, but having drawn with Montpellier in the previous round of fixtures and seen PSG and Monaco win on Saturday and Sunday, Lille travelled to fellow title challengers Lyon on Sunday night in third, desperately needing a win to maintain their momentum and stop Lyon moving above them as well.

But Lille were uncharacteristically sloppy at the back in the first half, allowing Islam Slimani to put Lyon into a two-goal lead. It looked a long way back from there, but Yilmaz was ready to take the responsibility on his hulking, hunched shoulders.

A minute before half-time, he fired a stunning 25-yard free-kick into the top corner of Anthony Lopes’ net. Fifteen minutes after the break, he sprang onto a loose Lucas Paqueta pass, drove into the box and crossed for Canadian strike partner Jonathan David to tap home.

Pick that one out! 🚀

Burak Yılmaz thunders the free kick over the wall and past the keeper!

A beautiful hit from the Lille forward 👏 pic.twitter.com/hPiVE4Ub2B

Then, with just five minutes left, Yilmaz sprinted onto a Yusuf Yazici flick on, powered into the box and delicately lifted the ball over Lopes and into the net. The Lyon players sank to their knees. Yilmaz’s Lille colleagues were in raptures. They had come back and were going top.

Including the four he scored in the most recent international break – including a brilliant hat-trick against Holland – that dink over Lopes was Yilmaz’s seventh in seven starts since returning from injury. One of the others for Lille won them three points against Metz. Not bad for a 35-year-old who was released by Besiktas last summer.

As head coach Christophe Galtier said following the Lyon match: “Burak is one of the players who are used to winning titles in Turkey. He went through big clubs, we see it in all the preparation. He is focused on competition. He was one of the driving forces behind this game. He was decisive.

“I watch everything that is happening in Paris, Monaco and Lyon. And it’s the forward players who make the difference. It is the players in front who made the difference here tonight.”

Marcelo, the current Lyon centre-back and Yilmaz’s former team-mate at Besiktas put it even more succinctly: “[Yilmaz] is a player who scores when he has the opportunity. We gave him the opportunity.”

Now, there are four games between Lille and the title. First, Nice, then the Derby du Nord with Lens, then St-Etienne at home and Angers away. Win them all and Galtier’s men win the league.

That is easier said than done. But with Yilmaz back and firing, and with his experience of getting teams over the line, Galtier will be quietly confident. For Yilmaz, a Ligue 1 title would be the seventh domestic trophy of his career; it would certainly be the most unexpected and perhaps the most significant too.

In there is perhaps a lesson for other clubs as well. For those prepared to take a risk in the transfer market, to ignore age and resale value and look purely at the ability to stick the ball in the back of the net, then there are still bargains to be had.