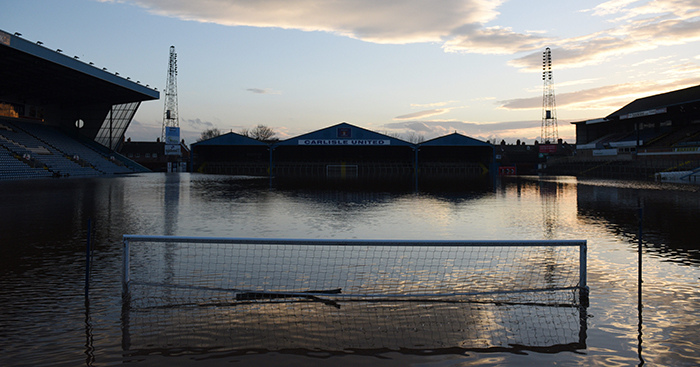 It has been over two years since Storm Desmond hit Cumbria, but Carlisle United are still suffering from the after-effects today in what is a clear reminder of the differences between footballs haves and have-nots.

After suffering floods during January 2005 which impacted on both Carlisle’s football club and the city as a whole, worse was to follow on the night of December 5, 2015 when Storm Desmond wreaked havoc throughout most of Cumbria.

The storm attracted national headlines as Warwick Road adjoining Brunton Park was reduced to a river navigable only by water transport.

It was a particularly damaging weekend for the club.

“When we were able to access our stadium about three days later, office desks had been turned over by the force of the water which had risen to a height of nearly ten feet on the lower concourses,” Operations Manager and Supporters Liaison Officer Nigel Dickinson says.

“Besides clearing the mess, we also needed to think about fulfilling first-team home fixtures.” 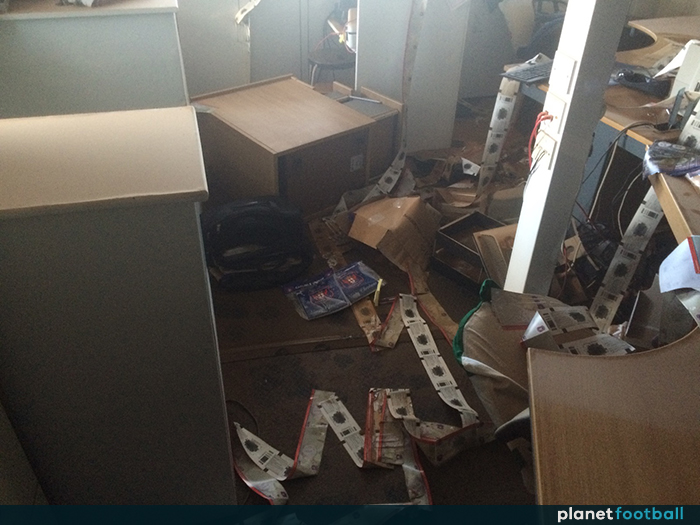 Carlisle eventually arranged to play two league games at Preston and Blackburn before facing Yeovil in an FA Cup tie at Blackpool.

Following a 2-2 stalemate, they were drawn to meet Everton at Brunton Park in the fourth round should they win the replay. And win it they did, making for an almighty rush to get prepared in time.

“The club had been determined that the fixture would be played in Carlisle as BT Sport were interested,” Dickinson says.

“With the pitch needing to be relayed, Eddie Stobart lorries helped in moving the new turf. The pitch needed 7-8 days to bed in, but it was deemed fit to play and tested during a home match against York City.

“However, we were unable to provide hot food for the spectators from our usual outlets due to environmental health issues.

“Nevertheless, on the day of the Everton game a week later, work contractors mingled with BT Sport engineers and supporters.” 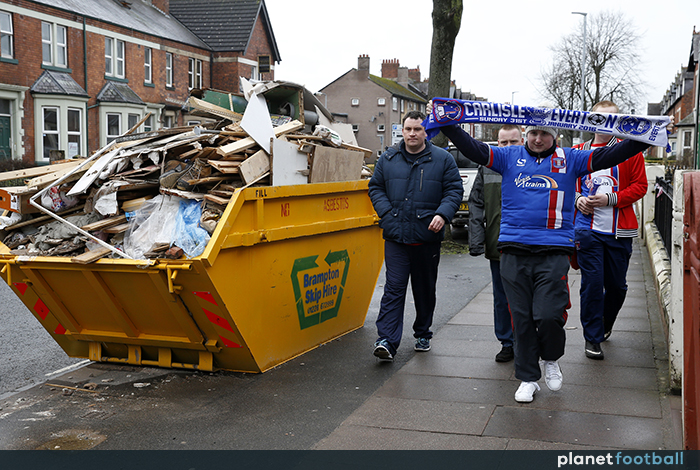 Everton won the match 3-0 and the national TV audience may have assumed Carlisle had recovered from the storm. That was not quite the case.

“We were forced to work in portacabins for nine months after the storm, with generators used for electricity and just so much general upheaval,” Dickinson says.

“Eventually, the main offices were moved from the West Stand to the first floor of the newer East Pioneer Stand. Although we are fairly safe from any further flooding at this level, we now just use laptops which can be taken home.”

On the further risks of flooding at Brunton Park, Dickinson adds: “We really are at the mercy of the elements with three rivers merging in Carlisle and two close nearby. Our training pitch and car parks are regularly flooded.”

Sure enough, in December 2017 there was more heavy rain in Carlisle and the drains around the stadium overflowed, causing more flooding albeit not on the scale of Storm Desmond.

Still, it was another reminder of the difficulty the club faces just to compete with their League Two rivals.

“At the time, we thought, ‘oh no, here we go again’, but we were able to pump out the water in time to fulfil a home fixture three days later,” Dickinson says.

“Our insurers covered the repairs from Storm Desmond but have increased the premiums, and serious flooding could happen again given our location.

“What we need is a new stadium away from the rivers. A sporting hub would be excellent for Carlisle, but our talks with the council have yet to realise a solution.

“Although the budget for (manager) Keith Curle has not been affected by the repercussions of Storm Desmond, just think what we could achieve without constantly allocating money to ground maintenance for a dilapidated stadium.

“There has been some financial help though, with Rod Stewart providing a donation following his 2016 Summer concert at the stadium.”

Carlisle are 13th in League Two ahead of Saturday’s home game against Colchester and despite the problems over the last few years, the mood is upbeat.

Even across the road at the Beehive pub, home to match day supporters, resilience is much in evidence.

Landlord Mike Wheatley says: “We were unable to operate for three months after the storm, but the insurers looked after us, and the fans returned for their pre-match pints. You have just got to get on with it.”

At a time when Tottenham are building a new stadium adjacent to White Hart Lane, and Chelsea are planning to renovate their current site, clubs at the opposite end of the football pyramid are facing a far tougher set of circumstannces.

Although Dickinson says Storm Desmond offered the club an opportunity “to put things right from an operations point of view”, until they can find help to fund a new stadium, they are simply bidding to stay afloat.