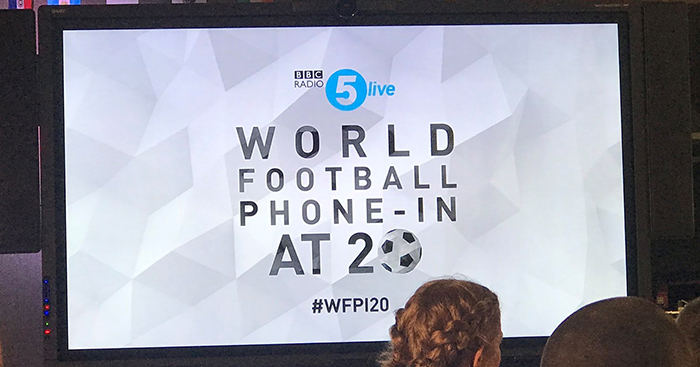 Once a week, at around 2am on a Saturday morning, The Real Sounds Of Africa’s seminal Italia ’90 anthem ‘Soccer Fan’ plays out on BBC Radio 5 Live, signalling the start of the ‘World Football Phone-In’. It’s a cult classic of radio broadcasting.

Last weekend it celebrated 20 years on the airwaves, and in that time it’s built up a dedicated worldwide following. Growing from a five-minute round-up of South American football from journalist Tim Vickery in Brazil, it has since grown into a two-hour weekly extravaganza.

Nightowl presenter Dotun Adebayo hosts and is joined by a rotating cast of other regional experts each week. And though it may be a niche show recorded in the middle of the night, thousands from around the world tune in to listen.

In New Delhi, Anand Mann is one of them. There, it’s six or seven in the morning (depending on the time of year). Yet almost without fail, this is how he begins his Saturday.

A Bayern Munich fan and South American football enthusiast, Anand is a regular caller. Inspired so much the World Football Phone-In, he travelled across South America a few years ago, attending as many matches as possible along the way.

“It is hard to follow football in Argentina from India as the matches are usually from 3am-7am,” he tells me. “The World Football Phone-In helps in keeping track.”

Anand is far from the only listener whose path has been impacted by the show.

For Joseph Sexton, it led to a career.

“It’s been an absolutely massive influence,” he says. “I had already applied to do Spanish as a joint honours for my degree. When I got to second year, I jumped at the chance to add Portuguese.

“I was inspired by South America as Tim told it, in the way that few can match for storytelling, but also by Andy Brassell.”

He's not just the 'Legendinho', he's the angel of South American football.

“I think the fact it looks at football with a social conscious is the key to its success,” he says.

“Often you hear people say they like the show even if they don’t have a keen interest in football. I think the writing and podcasts I do also try and give some social context too so in that sense it has probably influenced me.”

For a certain type of football obsessive, the World Football Phone-In is the gold standard.

Paul Sarahs, who has been the show’s European correspondent for the past five years, told me what a privilege it is to appear.

“I’ll never get a gig that I’m proud of, or more happy to be a part of than the World Football Phone-In,” he says. “It’s an institution – to be part of it is sensational.”

To celebrate 20 years of the programme, the BBC broadcast a four-hour special. Fans were invited to sit in on the recording in Salford, and about 30 long-time listeners travelled from around the UK. One dedicated fan even flew in from Copenhagen.

Another listener, Simon, a baker in Cornwall, couldn’t make it but sent up fifty pasties to cater for the party.

Nothing demonstrates that sense of inclusivity than the scene of 30 footballing obsessives, wearing shirts from around the world – Iran, Argentina and Romania among them – congregating to pull an all-nighter and contribute to four solid hours of global football discussion.

Tim Vickery is there in person, having flown in from Rio earlier that day. Paul Sarahs is there too, and global correspondents Jon Arnold, Mark Gleeson and John Duerden are available via phone lines and video link. Between them, the 32 teams going to the World Cup from FIFA’s six confederations are well covered.

Dotun Adebayo, wearing a Nigeria jersey and well into the spirit of the occasion, ably manages to tie everything together, but not without a few extra surprises.

Former contributors Mani Djazmi (Asia) and Sean Wheelock (North America) have returned on the line for one night only, and there’s a special message of congratulations from Andy Brassell, who can’t go without being reminded of one of the phone-in’s most hilariously confrontational callers.

There’s an anarchic feel to the night, as the live audience are invited to contribute as much as they feel, alongside the many experts on hand.

There’s a focus on issues of the day, but without a strict agenda, the conversation has room to breathe and go unexpected places. Adebayo will take any thread and just run with it.

Two holders of the programme’s hallowed “Brazilian shirt names” (awarded to exceptional callers) joined via video link from the BBC’s studios in London.

Cleo, known as The Book, and Andrew, known as The Gent, have been calling for years and are a vital part of the World Football Phone-In’s very fabric. They’ve both suffered personal hardship over the last year, and the tribute that is paid to their contributions over the years was moving and heartfelt. It affirms the community that makes the show.

The Brazilian shirt names are part of a wider lexicon, which is just one of the show’s many charming idiosyncrasies. There’s an entire glossary that could be made from the in-jokes and repeated references.

Thanks for joining us over the last 20 years, from all over the world!

Henrik flew himself over from Denmark 🇩🇰, while the Legendinho joined us from Rio 🇧🇷.#WFPI20 🌍⚽📞 pic.twitter.com/h3RMpKceQI

Vickery thinks it’s integral to the show’s dedicated following: “It has those little in-jokes, where if you listen every week, you’re part of it.

“Anyone who spends a little bit of time will get to know the little silly in-jokes that we have. I love that, and I think that’s absolutely crucial to the identity of the show. But without being self indulgent, it’s inclusive, anyone can join in.”

Adebayo says the phone-in is much more than a football chat show, and therein lies its biggest strength: “We’re not even talking about football half the time, or so it seems, but it’s a broader church than that.

“Football is used as a prism to talk about so many other things – to entertain people, to have some jokes alongside the way, but also to have some great conversation.”