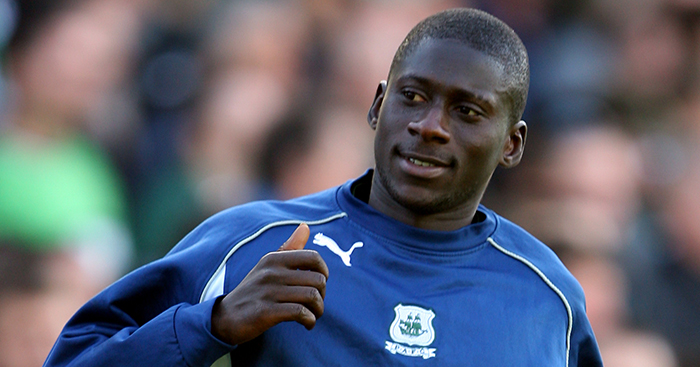 Cherno Samba experienced some incredible highs and devastating lows as one of England’s most exciting young footballers – and he believes that makes him the perfect person to help guide the next generation of talent.

The course of Samba’s entire career changed forever when he was just 15. Pursued by some of England’s biggest clubs, his dream move to Liverpool collapsed unexpectedly and he never truly recovered from the disappointment.

Although Samba still went on to become a professional footballer, playing for clubs in five different countries, he never had the same desire to work hard and improve. A sense of frustration lingered, he slacked off in training and became obsessed with thoughts of what might have been.

“The fact that the deal didn’t go through really broke me down,” says Samba. “It had a massive impact for the rest of my career. I didn’t play football after that for six months. I just didn’t want to do anything to do with football anymore.

“But then I had my mum and dad, and my friends and family, who said, ‘Look, this is your God-given talent. Just go back.’ But the damage was already done. I had lost my appetite for the game.”

An explosive striker, with pace, skills and finishing ability, Samba was once considered the most promising young player in England. Strange as it now seems, he briefly overshadowed Wayne Rooney as the golden boy of his generation.

He still has legendary status among all Championship Manager fans as a result. Available on the cheap from Millwall, Samba would consistently blossom into one of the game’s deadliest goalscorers.

“My stats were very good, put it that way,” he laughs. “A lot of people ask me if I think it affected my football. I can say yes and no.

“When I was playing I used to check my stats and I felt like I had to deliver every time. My opponents used to tease me about it as well.

“On that alone, it had a little bit of an impact on me, but if you want to get to the top then nothing should distract you. Nothing whatsoever.

“It’s something that I embraced and accepted. I’ll be 101, with a walking stick, and people will still come to me and talk about Championship Manager. I’ll take that all day.”

The only player you ever needed on Championship Manager…

Samba was born in Gambia and moved to England at the age of six to reunite with his mum and his brother. The family lived in Watford for a few months before settling in Peckham, where Samba’s incredible exploits for his school and Sunday League teams led to offers for trials at Millwall, Charlton and West Ham United.

Millwall was Samba’s local club and the one he chose to commit to. And as he moved through the ranks it became clear his team-mates could no longer keep up. International recognition followed and Samba seemed destined for the very top. Premier League scouts circled.

“I remember I had my first England game [for the Under-15s] against Northern Ireland, and the second game against Wales. We won 3-1. I scored, set up a goal and got man of the match. That’s when everything got out of hand.

“Liverpool, Manchester United, Arsenal and Leeds came in at the time. Liverpool was the first club I went to. Gerard Houllier, who was their manager then, asked me who my favourite player was and I said it was Michael Owen.

“I stayed up there for two weeks and when I got back to London they got Michael to give me a call. All he said was, ‘Come down, we’ll look after you. It would be a privilege to play with you. Liverpool is a big club, a family club.’”

Samba laughs: “I couldn’t let Michael down after that phone call, could I?”

End of the dream

The intervention from England’s World Cup hero, who was just five years older than Samba, made all the difference. Liverpool had pulled out all the stops to convince him that his future lay at Anfield.

A £2million offer was tabled but the deal fell through, leaving Samba devastated. His vividly remembers the moment his dad broke the bad news to him.

“I just dropped on the kitchen floor and cried my eyes out,” he says. “Something bizarre happened while I was doing that.

“I was only 15 but I thought to myself, ‘I don’t want anything to do with football anymore. If I do go back to football all I care about is making sure me and my family are secure financially.’”

After a break from playing to get his head straight following the disappearance of a life-changing opportunity, Samba returned to Millwall, who had promised him a three-year professional contract as soon as he turned 17.

But his drive had disappeared and he no longer put in the required effort. Content to cruise on talent alone, others caught up.

Having failed to make his expected breakthrough to the Millwall first team, Samba left to sign for Cadiz, who were targeting promotion to La Liga. He was loaned out to Malaga’s B team and playing well. But he was in turmoil.

“Obviously Spain is a beautiful country. The weather’s nice, the food’s nice and they play beautiful football. When I went there I had everything. I was getting paid really well and I had an apartment overlooking the beach, so what more do you want?

“But there was something missing. I was isolated. I just kept thinking about what had happened with Liverpool. That was eating away at me and I became depressed.

“I used to sweat at night and have nightmares, just thinking that I’d failed in my own country and had to be shipped out to Spain.

“I used to go the physio’s room and take as many tablets as I could. I just didn’t want to be here. I wanted to take my own life.”

On one occasion, when Samba didn’t respond to a team-mate who called in for him on the way to training, his door was broken down and he was found lying on the floor having overdosed. The paramedics came and Samba woke up in hospital to the stark realisation of what had happened.

A normally bright and bubbly person, his life had been overtaken by despair. However, with the support of his family and his faith, Samba pulled through and was able to start thinking more positively.

He returned to England and signed for Plymouth Argyle in the summer of 2006, grabbing the winner against Coventry City on his debut.

Samba played infrequently, often as an impact substitute, and later embarked on moves to Finland, Greece and Norway. He also won four international caps for the country of his birth, scoring once in a friendly win over Tunisia.

“Gambia had been after me to play for them for 15 years. I chose to switch allegiance and it was really good to play for them. I got to play in qualifiers for the African Cup of Nations and the World Cup, which was a dream.”

Samba retired in July 2015 due to a persistent ankle problem, coupled with the fact that he no longer loved playing football as he once had.

Since hanging up his boots he’s been working on his coaching badges as he looks to move onto the next phase of his career.

“I’m finishing my A Licence this year and hoping to get a job with an academy,” he says. “Ultimately I want to help guide the next generation of talent around the pitfalls of the game. I want to show them my experience – what to do and what not to do.

“That’s why I brought my autobiography out as well, which took me 18 months to do. If I can help one kid that would be an accomplishment.

“I don’t think there’s any better person to teach the next generation than me. I’ve been in the system and I’ve lived it.”

My story. My words. Cherno Samba: Still In The Game

He didn’t become the star that so many thought he would, but Samba learned an awful lot along the way. He was hyped up like few players before or since, and had difficulty living up to his own expectations, let alone anyone else’s, yet still achieved more than most could ever hope to.

“How many people in life get to say that they achieved their goal?” he says. “My goal was two things. One was to become a professional footballer. The other was to play for England. And I did both.

“The expectation that was put on me is why it might look like a failure, but it’s not. In that sense I’m very happy and proud of what I’ve achieved.

“If I have one regret, it’s that I should have worked harder in terms of putting the hours in. It was so easy for me at Millwall that sometimes I didn’t help myself.

“I was ducking and diving. I’d go in early from shooting practice and not put the effort in. I should have pushed myself.”

It’s a lesson he will now look to pass on to the next generation.