Your perception of what makes a ‘great’ footballer will inevitably change over time.

When you’re growing up, it’s the guy who plays as if he has a ball glued to his feet, beating a defender with every touch and sometimes two at once.

As you get older and get handed a position yourself, attention will turn to those whose skills your coaches urge you to emulate. Sometimes that’s still the skilful dribblers, but sometimes someone else will take on that role.

Then, at some point, it will change again. You’ll still appreciate those players, but playmakers will become those who you hold in the highest esteem.

This tends to come later in life, when you have given up your own dreams of playing and decided to focus on football-as-art, searching for meaning and beauty beyond that which is solely skilful.

It makes sense, then, that your own quest to see something different from the game will coincide with those players whose own being can be boiled down to seeing that which others do not. By picking out their vision you can amplify your own within your own headcanon.

For some, this means the legends of the 90s like Álvaro Recoba. More recently, Juan Román Riquelme and Andrea Pirlo fill that gap. Later down the line, we may end up saying the same about Christian Eriksen. 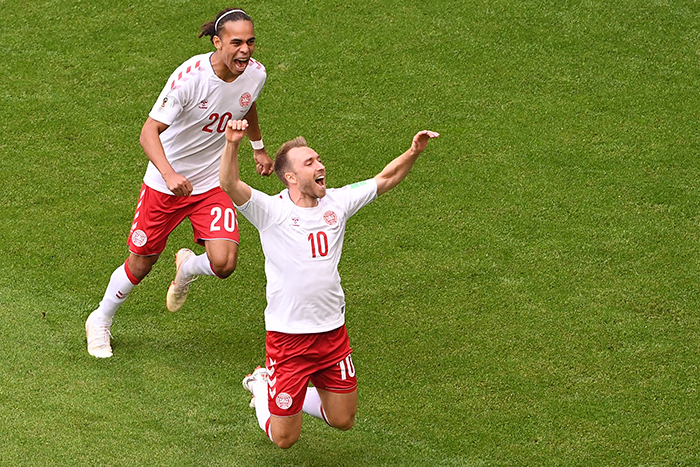 If you’re reading Eriksen’s name alongside that of Pirlo and preparing a diatribe on relative quality, let me first say that’s the entire point.

Both Recoba and Riquelme were locally revered but lacked the global acclaim of their peers before retirement, while Pirlo only attained his current status in the twilight of a career with as many unremarkable moments as remarkable ones.

This isn’t an attempt to present myself among the intelligentsia capable of discovering a great unknown – after all, as a player representing one of the top Premier League teams, with a grounding in the prestigious Ajax academy, Eriksen is hardly buried treasure – but there is an argument to be made that the Dane will reach an even higher plane only after he retires from the game.

He sees what others don’t

The lack of attention can be present even in the framing of some of his work, as with the first assist he produced in the 2017-18 season.

Harry Kane is positioned as close as possible to the centre of the frame, as if the camera operator’s eyes are instantly drawn towards him and what he will do. Understandably so, given the seven goals he scored in the final two games of the previous season, but it’s almost presented as Kane’s stage with a supporting cast around him.

Even if you recognise Eriksen as the recipient of his team-mate’s pass, you’re still watching Kane’s run in anticipation of him receiving a return ball in the box and, unless you’re a Spurs fan who’s seen this kind of thing before, the person playing the ball is secondary.

Then, suddenly, another body emerges from the periphery and the ball is in the net before you can even process who it was. Eriksen hasn’t been looking for Kane at all, but rather – with all eyes drawn to the England man – he’s looked where no one else is looking and picked out Dele Alli.

It’s a fantastic run, but one which would go ignored without the accompanying quality of pass.

For Eriksen to measure it after just one quick glance is astonishing, given the precision needed to first clear the scrum in the middle and then bisect two Newcastle defenders, all while ensuring the extra juice keeps it near enough to Dele and far enough from Rob Elliot.

It’s football’s equivalent of chipping in for an eagle, if the hole was placed on the lip of a bunker.

There’s an argument that Eriksen’s nationality has a part to play in the way his game is received.

Sure, the Laudrup brothers might have rubbished any myth of the Danish national side being functional or unexciting, but the last two decades have left the country too good for Eriksen to attain a glorious outlier status à la George Weah or Jari Litmanen, but not good enough for him to be part of an all-conquering, trophy-winning entity.

He scores goals, too

He has tried to do plenty to combat that, however, and it’s not limited to assists and dead-ball plays. Hell, he even made a Denmark v Ireland fixture fun, with the sort of goal which must take hours of practice and yet looks effortless.

If anyone else scored Eriksen’s first in Dublin, you might be tempted to zone in on their eyes to identify the deep focus – that is if they matched the execution, rather than composing themselves before beating Darren Randolph.

Instead, Eriksen finishes the chance like a man who knows an extra touch would benefit Ireland more than it would him, marrying that innate knowledge with a trust in his own finishing ability to the point where he hits an open-play strike more cleanly and accurately than most would convert a set-piece.

Even Randolph’s attempt at a save feels like a raised middle finger of a dive, cursing Eriksen’s ability to find the one part of the goal he was never reaching and throwing in a bounce in off the crossbar for good measure.

It may ultimately be the case that Eriksen, like many of this Tottenham generation, ends up getting a similar treatment to those from Parma’s iconic squads around the turn of the century: reverence long after the fact, but only once that original gang becomes a diaspora.

While brilliance can be immortalised by success during an illustrious career, retrospectives don’t require the same: Eriksen may go on to achieve plenty more, either in North London or elsewhere, but either way there will eventually come a time when his brilliance in a white shirt – and the red of Denmark – won’t be minimised by the surroundings in which it took place.