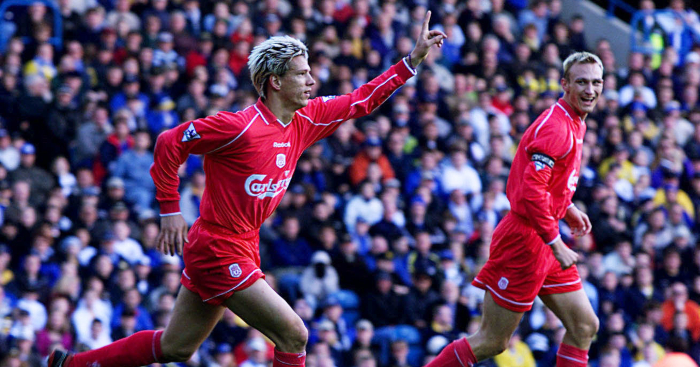 Three Lions, Paul Gascoigne’s iconic goal – and celebration – against Scotland, Stuart Pearce’s moment of redemption – even in defeat, Euro 96 has retained a special place in the national psyche. It was a summer of high spirits and great promise, defined by the belief that football was coming home.

But in the semi-finals, England came up short. After Alan Shearer and Stefan Kuntz exchanged early goals, the tension mounted throughout the rest of the match. Penalties loomed ever closer. Christian Ziege was one of six German players to score in the shoot-out, while Gareth Southgate’s effort was saved.

Providing the cross for Olivier Bierhoff’s equaliser against the Czech Republic, which was followed by the striker’s golden goal winner, topped off an incredible few weeks for Ziege, and marked the pinnacle of an international career that featured 72 caps and appearances in four major tournaments.

“I have to say, I had a fantastic performance at the right time,” Ziege says. “I was one of three players who played every single minute in every game, from the first to the last.

“I had to play different positions as well because, until the final, we had so many problems with injuries. It was really interesting.” He laughs: “And it went well for us at the end.”

Ziege was 24 at the time and entering the prime of his career. A left wing-back with an eye for goal and a thunderous shot, he was already a Bayern Munich stalwart. Representing Germany’s biggest club had been a dream, albeit one complicated by inconsistent results and managerial strife.

“I think it was the most difficult time that Bayern Munich had had in several years,” he says. “When I came they were quite successful. Jupp Heynckes was the coach.

“The first season we finished second in the league but then we kind of rebuilt the team because we lost some players like Jurgen Kohler and Stefan Reuter. They went to Italy and two or three players stopped playing. We had to renew the group.

“In the beginning, the results weren’t that good. They sacked Jupp Heynckes and then, from there, I think everyone made some wrong decisions. We, as players, did. The whole club was not in the right way in that period.”

In Ziege’s second season, Bayern finished as unthinkably low as 10th, with a negative goal difference, and had won the Bundesliga just once in six years. Claiming the UEFA Cup under caretaker manager Franz Beckenbauer in 1996 proved a turning point.

A Bordeaux side featuring Bixente Lizarazu, Zinedine Zidane and Christophe Dugarry – that had previously upset a superb Milan side -was beaten 5-1 across the course of two legs in the final.

Belief returned to the club. Giovanni Trapattoni took over for the second time and steered Bayern to the title. Ziege was in excellent form, scoring nine goals in all competitions.

“You take a lot of things from every single manager you have, because obviously everyone does it in their own style,” he says. “They have different priorities in their training sessions and in games. But I have to say I learned a lot in the two spells with Giovanni Trapattoni.

Ziege left on a high to sign for AC Milan in 1997. Serie A was considered the strongest league in the world and packed with star players. Many of Ziege’s team-mates at club and international level had gone to Italy to test themselves and he wanted to do the same.

“I love the Italian mentality. The Italian food and the lifestyle. Everything was good at that time and I’d had that dream since I was 14 or 15. I said, ‘Okay, I have big dreams, but I have to realise them step by step.’

“I was at Bayern Munich for seven years and there was nothing wrong, but I had that dream to play in Italy as well. The chance came and I decided to leave.”

Milan had many talented players but were a shadow of their former selves. They’d finished 11th the season before Ziege arrived and even the returning Fabio Capello couldn’t get them challenging again. Mid-table beckoned once more.

“Everything was different and being a professional player in Italy, at least at that time, was not too easy, but I enjoyed every single moment there. I had a difficult time with injuries and different things, so it didn’t really work out, but in the second season we won the Scudetto, which was a success.

“Seven games before the end of the season we were seven points behind Lazio, and we managed to win the Scudetto. That was amazing. Coming closer and closer and then being successful in the very last game was unbelievable.”

Although winning the title meant a lot to Ziege, he had fallen out of favour under Alberto Zaccheroni and didn’t play as often as he would have liked. He also experienced difficulties with the club hierarchy, so decided that a fresh start was needed. 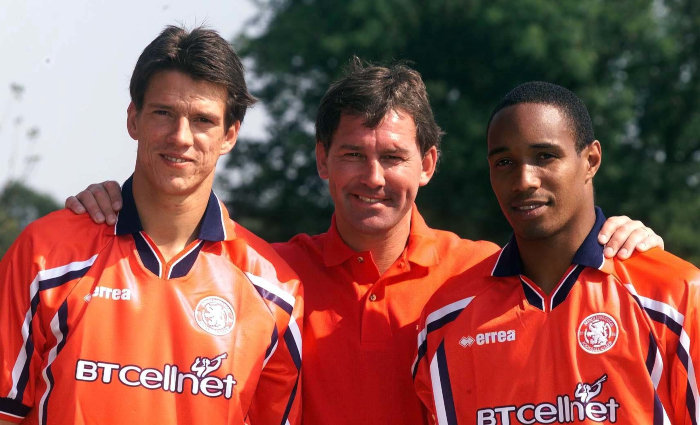 On the surface, trading Milan for Middlesbrough seemed an odd move, but Ziege was desperate to play and Bryan Robson had made some ambitious signings. Paul Gascoigne stood out above the rest for his eccentric character and exceptional ability.

“I was just proud playing alongside him,” Ziege says. “Obviously, he had some problems, but there was never a problem with me. I liked him and we were close.

“I’ve seen a lot of players, but I’ve never seen a player like Gazza. Just training with him and seeing how outstanding he could be was amazing. I’m just happy that I met him.

“I played with a lot of high-quality players but on a day when Gazza was really up for it, he was amazing. What a player. He had everything – the technique, the power. He never lost the ball. It was quite amazing.”

Ziege loved his year at the Riverside Stadium, where he was welcomed by team-mates and supporters and rediscovered the joy of playing regularly. He scored some impressive goals too – thumping free kicks against Derby County and Everton, as well as a delicate lob to secure a draw away to Sunderland.

Looking back, Ziege feels conflicted about his controversial £5.5million move to Liverpool, which was accompanied by allegations of tapping up. He was able to compete for honours once more, as the Reds won a cup treble, but felt unjustly sidelined by Gerard Houllier.

“On one hand, I can’t regret this move because I played one season for Liverpool,” he says. “What a club. In that season we qualified for the Champions League and won the League Cup, the FA Cup and the UEFA Cup.

“But, for me personally, it didn’t work with Houllier. Playing-wise, I should have stayed at Middlesbrough for at least another season, or maybe longer.

“There was no relationship (with Houllier). I was training hard and I asked all the assistant coaches, and my team-mates, ‘What am I doing wrong? What can I do better? Do I have to train more?’ Everybody said, ‘No, you’re doing everything you should do and you’re training well.’

“He never told me (why I wasn’t playing). Maybe he doesn’t have to – no problem – but I can’t tell you what the reason was. There was no relationship between him as a manager and me as a player.”

Tottenham offered Ziege an escape route. He had a promising first season before injuries took hold. The worst came in seemingly innocuous circumstances during a 2-2 draw with Charlton Athletic, which ended with a second consecutive red card.

“I got a normal dead leg. I played the game nearly until the end. I got sent off in the 88th minute or something. I remember it was Boxing Day. I just went home, and my leg was growing and growing. I was in pain and I was like, ‘What’s going on?’

“I didn’t know what the doctors did on Boxing Day and I didn’t want to disturb them. She said, ‘That doesn’t matter. You call them now.’

“The doctor came and saw my leg and said, ‘We have to go to the hospital right now.’ I couldn’t move anymore when we arrived at the hospital. I went unconscious.

“They said that if it had been 45 minutes later, they would have had to think about taking off my leg because otherwise I would have been fighting for my life.”

Fortunately, Ziege managed to avoid amputation, but he still ended up missing more than a year of football because the operation to address his restricted blood supply didn’t go to plan.

Towards the end of his career, he was consigned to the treatment table for long periods with a variety of issues but always fought back.

“You have to cope with it, and you have to get along. Sometimes it comes at the wrong point. You’re not performing at your best, then injuries come.

“Someone else is playing and doing a good job. When you come back it’s difficult to get your place back, but for me it’s always the same – never give up. I had a lot of setbacks in my time with injuries but what can you do. That’s just the way it is.”

It was during his spell at Tottenham that Ziege came close to winning the World Cup. Although Germany went into the tournament with low expectations, they started their campaign with an 8-0 hammering of Saudi Arabia, topped their group and made steady progress through the knockout rounds.

Ziege was a regular starter until a system change saw him dropped to the bench as Germany beat co-hosts South Korea 1-0 to reach the final. By the time he made a bittersweet appearance as a late substitute against Brazil, Ronaldo had already done the damage.

“I didn’t get it. Obviously, the manager makes decisions and sometimes the decision isn’t good for you.” 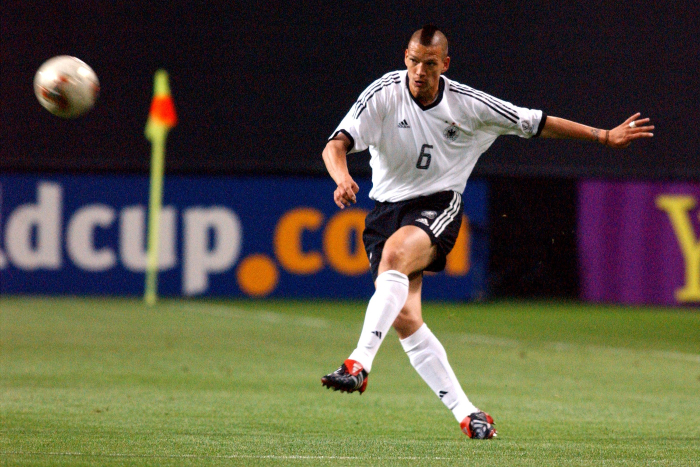 At the end of his Spurs contract, Ziege returned to Germany with Borussia Monchengladbach, but more injuries followed. Eventually, in October 2005, a persistent ankle problem forced him to announce his retirement at the age of 33.

“I always knew that the time would come where I wouldn’t be playing. Because of my setbacks with injuries in the last four or five months, I wasn’t really training so I had the chance to think about what might come next.

“It’s so unbelievable, and you’re so lucky if you play at such a high level, and you can enjoy it, but on the other hand there’s a different life out there as well. There are so many things you can work on and achieve.”

Ziege has remained involved in football ever since. He has had management roles in the German youth set-up, as well as with clubs in his homeland, Spain, Thailand and now Austria, where he’s in charge of third-tier FC Pinzgau Saalfelden.

His varied experiences have taught him the importance of being adaptable in dealing with the different challenges that come his way. There have been plenty, as both a player and manager, but 30 years on from his first professional appearance, Ziege’s passion for football endures.

“You work with different people, different mentalities, different ages. I’ve learned a lot. For me, you take everything. The biggest and most positive thing is that I have a lot of experience now in this job.

“I’ve not always had the best circumstances in terms of having all the stuff you need to be a really good team and a really good coach. Not every professional club has the pitch or the facilities, so you have to find ways to train your team.

“Guardiola or Klopp don’t have these problems,” Ziege laughs once again.

“I’m happy as long as I can somehow work as a coach or a manager because I love this game and I love to work with the players.”