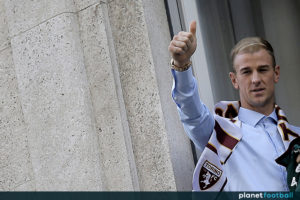 British goalkeeper Joe Hart gives a thumbs up upon his arrival for a medical check before joining the Torino football club from former club Manchester City on August 30, 2016 in Turin.
England goalkeeper Joe Hart arrived in Turin on Agust 30 ahead of undergoing a medical that should see him sign a season-long loan deal with the unfashionable Serie A club.
Hart, 29, has fallen out of favour with Pep Guardiola at Manchester City following the signing of Claudio Bravo from Barcelona and is set to join Torino in a bid to preserve his club future and international career following England’s spectacular Euro 2016 exit.
/ AFP / Marco BERTORELLO (Photo credit should read MARCO BERTORELLO/AFP/Getty Images)