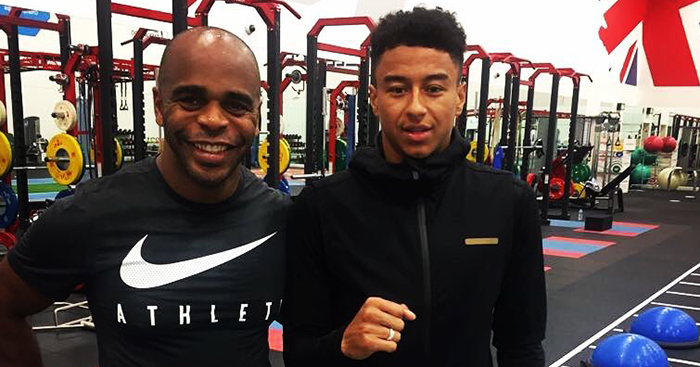 If you had turned up to a discreet 3G pitch in Newton Heath last summer you might have caught a glimpse of Jesse Lingard being put through his paces.

Not alongside his Manchester United team-mates, or with one of the numerous support staff employed by the Old Trafford giants, but alone, on a pitch tucked away in one of Manchester’s less-glitzy neighbourhoods behind the National Taekwondo Centre, a state of the art facility more used to shaping a succession of medal-winning fighters than hosting football royalty.

Alone, that is, apart from Wayne Richardson, a man who “wants to help”.

Lingard is one of a growing number of Premier League players who have turned to the fitness coach when they have needed a little extra – a programme to boost stamina, sharpen acceleration, help injury recovery or just feel up to the challenge of being their best.

But Richardson is just as likely to be putting in work with an academy prospect or a non-league journeyman as he is a player already at the top of his game, and it’s not just the body but also the mind he has become adept in caring for.

“It’s like being a social worker in some ways,” says the Leeds-based 46-year-old, who runs Richardson Sports with his wife, Emma Hughes.

“Especially with the young kids we deal with. We can get their bodies in top condition for them to do as well as they possibly can, but sometimes it’s just a case of listening, being a kind of mentor, then pointing them in the right direction if they need more specialist advice.

“We’re not agents and we don’t come between players and their clubs. But we’re here to improve them. Not make them Instagram-famous but put in real work – and the ones who do that see results.”

Working hard this morning preparing @jesselingard for the season ahead. 💪🏽🏃🏾 An absolute pleasure to work with such a dedicated professional. More sessions to come! 👊🏽 Check out our live story for more! #gobackready ⚽️

Famous Premier League stars usually have their own support systems, but others – Richardson’s youngest client was a six-year-old attached to Everton – can often need a more nuanced approach.

“We knew about senior pros from our earlier work, but more recently we thought, ‘What about academy players?'” Richardson says.

“There were around 1,000 released by clubs last year, only about one per cent make it, what about them? How could we prepare them for the next step of their career?

“It became a one-stop shop of fitness, personal programmes, impartial advice, what they need to work things out.

“We have come across kids with mental health problems and been able to direct them to the right people to help them.

“Mental health is a huge issue. Sometimes it’s a case of ‘you talk, I’ll listen’. But sometimes the problem is a lot bigger than us and we give them support and try to put them in touch with the right people.

“Strength and conditioning, sports science support, mentoring, advising parents – sometimes they need educating on how the game works. We want to see young people get the best advice and make good choices.”

Richardson’s first step on the football ladder came at Manchester City around the turn of the millennium.

“I was a fitness instructor and Joe Royle, the manager at the time, liked some of the work I was doing and said the lads enjoyed it and he decided he wanted to do a bit more,” says Richardson, who went on to study Strength and Conditioning and Sports Science at UCLAN.

“We worked with Richard Dunne, who had just arrived at the club, Shaun Goater, Darren Huckerby, Shaun Wright-Phillips, Paulo Wanchope and Leon Mike and we built up a reputation, in the season and the off-season.

“It was before the emergence of social media and I became the go-to man at that time. I went to Nottingham Forest – Jermaine Jenas, Michael Dawson – and then to Leeds, Doncaster, York, Huddersfield, doing recovery sessions, fitness sessions, all sorts.”

A job at Portsmouth fell through when the club went into receivership so Richardson, with the help of wife Emma, headed back north to set up on his own, first at Sport City than as tenants in a corner of the National Taekwondo Centre.

Many people might wonder why a professional footballer would ever feel they need to work with an outside fitness coach considering the facilities and staff already available to them, but Richardson is able to deliver things that, on occasion, even the biggest clubs can’t.

“This year we’ve had six Premier League players and a few Championship guys,” he says.

“When you’re injured, with the manager it’s ‘out of sight, out of mind’, so the clubs employ coaches to keep them on the right track but also to motivate them. We spend a lot of time listening and encouraging.

“We don’t come between the player and the club, that’s not what we’re about. We liaise with the clubs and send them reports.

“When it comes to working the top end players are very serious. These guys are full-time athletes.

“Give them reassurance, look at diet, maybe advise them that they need to buy in some services in key areas. Set them some goals and plans, whether its strength, speed, a plan for the off-season…

“This where I come in, where the clubs haven’t got the time to work on a specific issue – and that could be Premier League, academy or non-league.”

Indeed, Richardson is as happy working with the players of non-league Droylesden, where he has been heavily involved, or taking schoolkids’ sessions.

“I want to help,” he says. “People told me this would never happen – that I needed a Masters, a better CV. I went away and did that and since 2008 we have had around 7,000 footballers come to us. Now we are recognised for trying to support and help players.

“I’ve seen the problems and issues people go through and we’ve got a service that’s available to everybody.

“For people to come to you at any level is an honour. My motivation is I want to try and help.”

You can find out more about the work Richardson Sport do on their website or on Instagram.