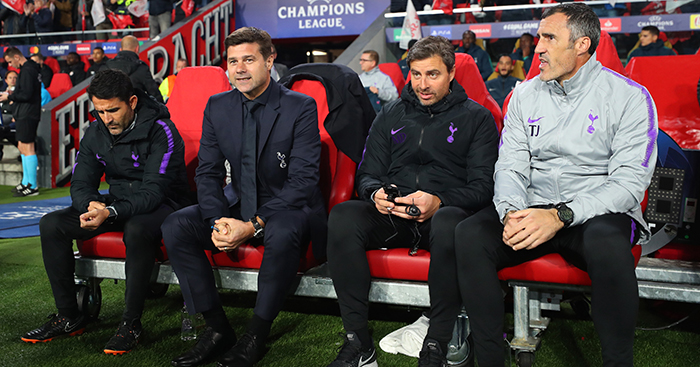 In March 2018, to much debate, the International Football Association Board approved the permanent use of video assistant referees. But the IFAB agreed to another change at that meeting which could have just as big an effect on football.

You may not have even heard about it, but amid all the talk about VAR, the use of pitchside technology by coaches was approved and subsequently taken advantage of at the World Cup in Russia.

It meant that, for the first time, rather than have to wait for half-time or the end of a game, a manager could watch key highlights back from the bench, helping them make crucial tactical tweaks immediately.

FIFA agreed a centralised deal for the World Cup, ensuring the smaller nations had access to the same technology as the larger, richer nations – but clubs around the world are now free to invest in any software of their choosing.

Hudl is one of the companies hoping to become the market leader.

Their Sportscode product, which allows coaches to ‘code’ games according to their own specific requirements, is already used by every Premier League and Championship club, every Bundesliga club, plus most clubs in La Liga and Ligue 1.

Now they have launched Hudl Replay, which works in tandem with Sportscode, allowing analysts to put together relevant clips and data for coaches to look at during games. And it is being beta tested by some of the biggest clubs in Europe.

But how much impact could the decision to allow this kind of technology have? Hudl’s Paul Neilson believes it could be huge.

“Tactically, the game is increasingly interesting,” he says. “Playing styles and formations are changing during the game, and any insights that you can give the coaching staff to help them with their decision making is something that clubs are seeking.

“That’s what we’re trying to enable with Hudl Replay. We’re trying to give them more actionable insights through video and data, when they need it most which is while a game is actually taking place.

“If you have your analyst in the stands coding the game live using Sportscode, Replay allows you to drive specific clips so the analyst can be in contact with the coaching staff and give them very specific examples of things they might want to review during the match.

“This process has happened anyway at half-time for the past four or five years so you’ll often find there is communication between the analysts and the coaching staff, who may be wanting to show the players certain clips at half-time.

“But what is changing now is that you have the ability to affect the game in real time, and that’s a big change for football. People are wanting this, they don’t want to have to wait until half-time, they want to be able to make decisions during the game.”

Hudl Replay allows clubs to watch live video, delayed video and replays from the bench, but the company expects most clients to use it in tandem with Sportscode, allowing them to view live the kind of insights they would previously have had to wait to see.

And those insights go way above the kind of data readily available to the public and which every club has access to.

“Within the video analysis market, there are data companies like Opta who provide services to allow you to break down a game, but that’s a standardised way of doing it,” Neilson says. “They break down every game in the same way.

“The Premier League has its own centralised deals with event data providers and player tracking providers. That data is all accessible by the clubs so that is just the start point for them: they can bring that data into their software, they can populate their timeline with shots, goals, headers, tackles, clearances, all the basic things.

“But then they will look to add their own layers of specific coding, and that can be for their own team or for their opponents, and the majority of football teams are using Sportscode for that.

“Sportscode gives you the power and flexibility to do it yourself so you’re not using a third-party data provider that has a standardised way of coding a game. You’re able to make it very specific to you. And that’s why Sportscode has become so popular.

“As a coach or analyst, you may have very specific ways of looking at transitions for example. So when there’s a regain of possession in certain areas of the field you might want to code that in a certain way based on your philosophy and your playing style.

“There are a hundred different ways you can categorise what happens in a dynamic sport like football.”

The use of pitchside technology is unlikely to ever be talked about as much as the use of VAR, but it’s impact on football, at least from a coaches’ point of view, could be just as big.