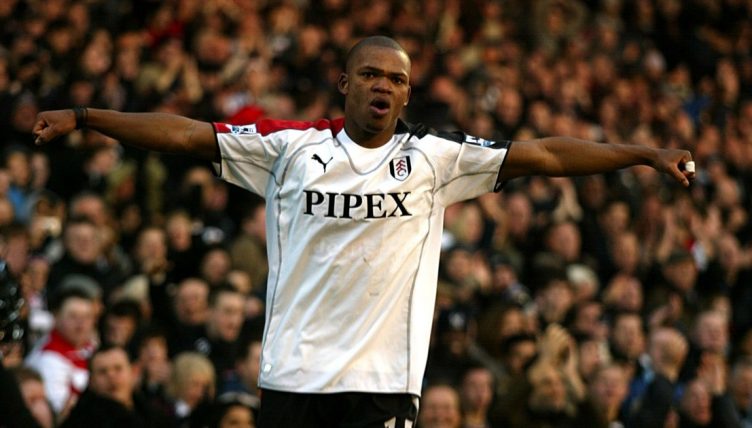 Collins John was just 18 when he turned up to training for FC Twente and was informed by his agent of strong interest from two Premier League clubs – Fulham and Manchester City.

Although John was in good form, with nine goals in 18 games, including a hat-trick in a 5-3 win over Groningen, the thought of leaving Twente hadn’t crossed his mind. He was focused on playing well for his first club, who he had joined at the age of 12, and continuing his development in familiar surroundings.

But, to John’s surprise, Twente seemed open to the idea of selling him.

“Before I knew it, I had a phone call from Cookie, from Chris Coleman,” John recalls. “He called me and I had a good conversation with him. From that moment really, I was like, wow, it’s real. It’s coming close.”

Fulham instantly made John feel wanted. The club’s Dutch goalkeeper, Edwin van der Sar, phoned the young striker to encourage him to join, explaining that he would be there to provide support and some home comforts if John was ever missing life in the Netherlands. In contrast, nobody from Manchester City ever got in touch.

Late interest from John’s boyhood club PSV Eindhoven caused him to delay his decision, but they wanted to wait until the summer to complete the deal. Now that the wheels were in motion, he was keen to get going. So on January 31, 2004, he signed for Fulham.

“I was like a little boy in a candy shop. It was amazing. Everything was new and exciting. It was my dream because I loved the Premier League. I was watching Match of the Day every Sunday morning. All the legends – Alan Shearer, Dennis Bergkamp, Zola, Hasselbaink.

“It was a dream come true. Everything was positive and everything was nice so I couldn’t wait to put the pen on the paper.”

Still, it wasn’t easy to leave behind home and family. After losing his father in the first Liberian civil war, John, his mother and brothers, both of whom also went on to play professional football, had boarded a boat heading for the Netherlands.

Partly because of all that they had been through together, moving away felt especially tough.

“Even though I was living by myself in Holland – I had my own apartment – mum was still close by. It was like a 20-minute drive, so I was always there anyway.

“Before I packed my stuff and everything, I went to see my mum. It was an emotional day to say goodbye to her because I was mummy’s little boy. There were a lot of tears, but that made me stronger. It made me want to succeed even more.”

The intention was to slowly ease John into the team while Fulham’s more experienced strikers – Brian McBride, Barry Hayles and Facundo Sava – continued to do the heavy lifting, but that plan soon changed. The new signing’s quick start couldn’t be ignored.

Brought off the bench for just his second appearance, away at Leicester City, he transformed a goalless game. Steed Malbranque lifted a ball over the top of the Foxes’ defence and John raced onto it, beating the offside trap and calmly lobbing Ian Walker for his first Fulham goal. He had only been on the pitch for six minutes.

Throwing it back to Collins John's first goal for #FFC! 😁 #TBT pic.twitter.com/7dh651dXjV

Shortly before full-time, John added a second. As Leicester pushed for an equaliser, they were left exposed at the back. Luis Boa Morte carried the ball into the area before squaring for John to score from close range.

Rewarded for his contribution by being called into the starting line-up for the visit of Blackburn Rovers two day later, John grabbed another brace. He had decisively banished any doubts about his ability to compete at the highest level.

“In your head, you think, ‘Can I even make it to the Premier League? Am I good enough?’ You’ve got to ask yourself questions. ‘Am I going to score goals here as well? What’s the league like? What’s the training like? Is the change of culture going to hold back my development?’ A lot of things go through your head, but I was happy.

“My confidence was so high. I didn’t wait too long to hit my first goal in the Premier League, so that was a big relief for me. That’s what I needed to make sure I was ready for the full season ahead of me.”

John was given an extra boost by a call-up to the senior Netherlands squad in August, just seven months after joining Fulham. It was an unexpected joy for someone so young. Another opportunity to be seized.

“If you play well, that means you’re ready for anything. At that time, I was ready. I proved it. It’s not like it was a gift. You have to prove it. You have to show that you’re good enough. Obviously, I scored goals in the best competition in the world so [Marco] van Basten chose to pick me. It was fully deserved, and it was amazing.

“I could never have thought that he would pick me. I was not even thinking about that. I thought I was going to go to the Under-21s. For him to call me up for the full squad was a total surprise, but it was one I will never forget.”

Fleeting appearances in two friendlies, against Sweden and Liechtenstein, proved to be the extent of John’s international career, but he considers it to have been a great honour all the same. Just training alongside world-class players was an eye-opening experience.

“Arjen Robben is one of the best players I ever played with, he was unbelievable,” John says. “When we did finishing, Roy Makaay and Ruud van Nistelrooy were just a different world. They hit the target every time they shoot on goal.

“For me to learn off those type of guys is just a real privilege. I can tell my kids about it when they’re older.”

Back at Fulham, having overcome the initial difficulties of moving abroad and coping with increased expectations, the 2005-06 season was his best.

Despite starting just 16 league games, with Coleman often preferring to play one up front and feeling that John worked better in a pair, he was still the club’s top scorer with 11 goals.

“I just couldn’t stop scoring that season. I always said, ‘Can you imagine if I started more games?’ Maybe I would hit more goals as well.

“As a striker, when you start scoring, you just get that confidence and everything you do goes in the back of the net. That was one of those seasons. That was the best period of my career, definitely.”

The reassuring presence of Chris Coleman was a major factor in John’s success. The belief of his manager spurred him on and made a massive difference

“He was great. His man-management was spot on. I can’t say any bad words about him. He was obviously the reason why I came to the club in the first place.

“I remember the first training session I had, they told me everything about how they scouted me. They first saw me play when I was 15, can you imagine?

“He could make you feel that you were 10 feet tall. That was the feeling he always gave to his players. He really gave you a boost before you went out on that pitch. You just felt you could beat anybody. It was excellent.”

Unfortunately for John, Coleman was sacked towards the end of the following season and replaced by Lawrie Sanchez. The new manager explained that he wanted to bring in his own players and the Dutch striker was unlikely to feature. Although he respected the decision, it proved a tough one to recover from.

“Of course, it’s disappointing, but that’s football,” John says. “It happens anywhere. Even though I love football to death, it’s also one of those sports where you have to be mentally strong to deal with the consequences.

“That’s the nature of the game. It’s not personal. Just take it as a professional, and that’s what I did.

John went on loan to Leicester City, Watford and then NEC Nijmegen before leaving Fulham permanently in the summer of 2009.

He admits that his career thereafter didn’t live up to its early promise. There were spells in Belgium, America, Azerbaijan, Iran and Poland, but he was unable to settle anywhere and perform at his best. It became a tale of diminishing returns.

Former #FFC & Netherlands striker Collins John has joined Barnet. He is only 26. What a bizarre one that is.

“When you do well and score a couple of important goals then your career might change overnight. If that doesn’t happen, it might be a long, long career.

“I made some bad decisions after that, and that didn’t work out well, but going to MLS was a great choice. One of the reasons was Brian McBride. He went back to Chicago and he called me up one day and said, ‘Come to MLS and we can play together again.’”

While the training facilities and levels of professionalism at Chicago Fire were impressive, that wasn’t the case with many of John’s subsequent clubs. Sometimes there were broken promises or delayed payments, causing him to prematurely move on once more.

“Obviously, football is my life, but I couldn’t play the way I wanted to play – physical, quick and powerful,” he says. “I lost that pace. I lost that desire to grind away at practice and training every day. When that appetite left me, I thought it was the right time to stop.

“Life is life. You make choices. You learn from your mistakes and you try to move on. Everything happens for a reason. That’s the way I see life. Of course, I wish things could have gone differently. But regrets? No way.”

John now has the freedom to spend more time with his family, especially his six-year-old daughter, and enjoy his hobbies. He still takes a keen interest in Fulham and was pleased to be invited back to Craven Cottage last season.

Although he lives in Almere, on the outskirts of Amsterdam, his attachment to London, and the club that helped him to realise his dreams, remains strong.

This interview was orginalyl published in April 2020.