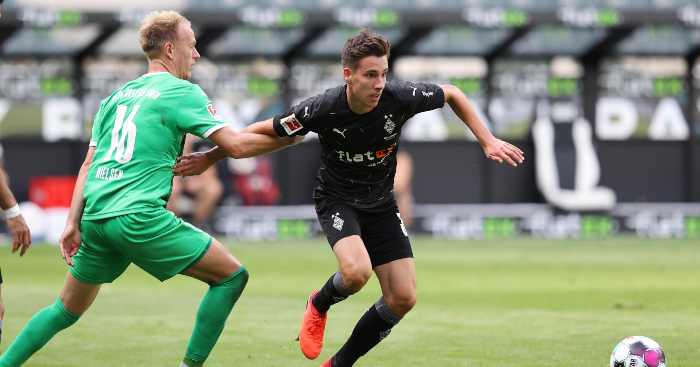 While he has been in Gladbach’s matchday squad on four occasions, Noss is yet to make an appearance for Die Fohlen. But he is positive that he won’t have to wait too long to make his senior debut for the club he has been with for more than a decade.

The Dusseldorf-born Noss is fluent in German, has been reared in the country’s football culture and even asked to join the international side’s ranks – but he is proud to play for the Republic of Ireland.

Noss, who has appeared for Eire’s Under-19s team, is half-Irish, as his mother hails from Dublin. He spent many summers with his grandparents and family in the Emerald Isle, so much so his childhood heroes include Roy Keane and Robbie Keane.

“I was very proud when I was called up to the Ireland under-19s team,” Noss says. “There was no second thought from me – ‘can I still play for Germany?’ – I just thought it was a great chance for me to play for Ireland, so I took it straight away.

“It came about in a funny way, actually, because my grandad was having a conversation with someone in a Dublin pub and this person had something to do with the Irish Football Association.

“That led to Tom Mohan, the Under-19s’ manager, phoning my mum and it went from there. I really enjoyed playing for the Under-19s and my goal now is to get into the Under-21s squad.”

“The German FA contacted my club’s under-23 coach once I started playing for Ireland but I didn’t respond to them.”⁠
⁠
Republic of Ireland U19 international Conor Noss has batted away advances from Germany and is committed to the Boys in Green ☘️ pic.twitter.com/gWDbG9ulXW

The 19-year-old is not the first Irish-German to play for Eire, either, as Patrick Kohlmann appeared for the Under-21s back in the 2000s.

Noss, whose surname is written Noß in German, was a boyhood Manchester United supporter and grew up idolising Cristiano Ronaldo. In junior football, he would try to re-enact the Portuguese superstar’s famous stepovers on the pitch.

But that was quickly reined in amid the disciplined nature of German youth football, where he was moulded into the playmaker that he has become today – a process over a decade in the making, having been spotted by Gladbach playing for his local team when he was just eight.

“I was taking part in a tournament and, after the game, a coach came to me and my dad and asked if I would like to take part in a trial,” he says.

“I went and, after a couple of training sessions, they said they wanted me to join Monchengladbach, so that was the beginning of everything.”

Noss graduated through the ranks at the club, eventually cementing a place in their Under-19s and then with their second team, which plays in the Regionalliga West division.

It was with the latter that his talents were noticed and he was called up to train with the senior squad in September last year. Subsequently, he was included for a Europa League game in Turkey against Istanbul Basaksehir. A few days later, he was named on the bench for a Bundesliga home game against Augsburg.

“We were 4-0 up at half-time, so I thought maybe in the second half, I would be called up to play,” Noss says. “I thought the manager (Marco Rose) would give a chance to a young player, but unfortunately, two of our defenders were injured, so he had to bring on two defenders to replace them.

“Everyone made it as easy as possible for me, especially Christoph Kramer, who told me not to worry about anything and just focus on myself. He won the World Cup with Germany, so to receive advice from him was amazing.

“I have learned a lot from the manager, too, because he is a very good coach. His style is intense, with a lot of high pressing – so it means you are always active, with or without the ball.

“He has only been for a year and a half, but he has changed the whole environment at the club.” 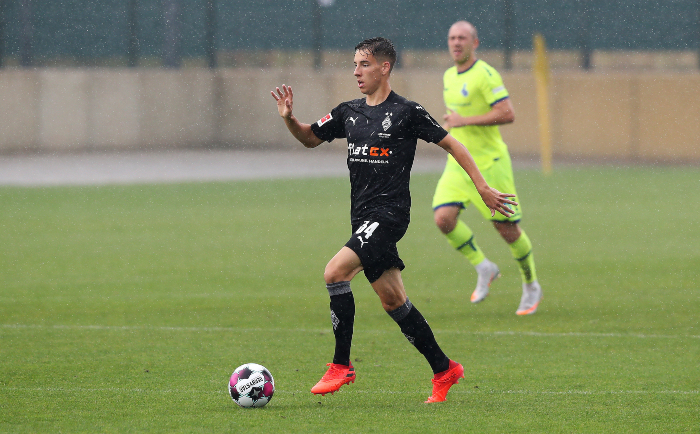 Noss also found himself in the squads that travelled to Roma and Dortmund.

“I was very excited to be with the first team and I soaked everything up, especially when we went to play in Rome. The atmosphere was crazy even in the warm-up and I couldn’t believe how huge the stadium was.

“Dortmund, with their yellow wall, was a crazy experience too.”

When the 2019-20 Bundesliga restarted in May, Noss was part of the Gladbach’s first team, based at a hotel due to COVID restrictions.

But he is not at the club merely to be an observer and is desperate to establish himself in the first team, where he dreams of following in the footsteps of the likes of Marco Reus, Sebastian Deisler and Mahmoud Dahoud.

After being told by Rose he would be involved at the beginning of this season, he was struck down by an untimely injury to his pubic bone, which has kept him out of action for the past six weeks.

“I was disappointed because I was with the first-team squad throughout all of the pre-season,” Noss says.

“Obviously when you sit on the bench you always hope to get on because that is what you want to do as a football player, but I know I have to be patient and just keep believing and performing well in training.

“We have great players here, but you have to believe in yourself and when you get a chance, you have to take it.”

Numerous English players have tried their luck in Germany over the past couple of years, most notably Jadon Sancho, who has thrived at Dortmund.

“The Bundesliga is maybe not as intense as the Premier League, but it is definitely more technical,” Noss says. “The young English guys who come here can learn a lot when it comes to the tactical side and they can do well in Germany.”

As well as his determination to become a first-team regular at Gladbach, Noss is also dreaming of playing at a European Championships and a World Cup – with either Ireland or Germany.

“We will see what happens,” he says. “Some of the German boys at the club have been telling me to play for Germany and I have always been proud to be both German and Irish.”