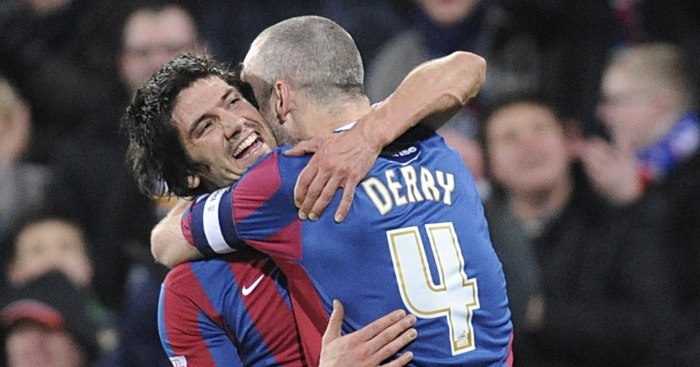 Right-backs rarely get to be heroes. They play in a position where discipline and consistency have traditionally been prized above everything else. The emphasis is normally placed on keeping it simple and avoiding mistakes, rather than taking risks and making game-changing contributions.

It’s the nature of the role, or at least it used to be until an exciting revolution led by players like Cafu and Dani Alves. But there have always been occasions when a humble right-back has stolen the headlines, and none more spectacularly than Danny Butterfield, who scored a perfect hat-trick for Crystal Palace in 2010.

His moment in the spotlight came about almost entirely by accident. With debts of £30million, the Eagles had been plunged into administration and forced to sell their bright young prospect Victor Moses to Wigan Athletic on transfer deadline day. They were suddenly short of options to play up front, so Neil Warnock found a novel solution.

“We had a normal training session during the week, with small-sided games. I just went to play up front with Alan Lee in a jovial way,” says Butterfield. “We had so many defenders in our team, so I thought, ‘I’ll be the one that goes up front.’

“We sort of hit it off really. We were scoring goals and playing well off each other. It was a bit of a giggle really, as opposed to being serious. Neil Warnock obviously spotted something he thought might work.”

‘A few of the lads were laughing’

Butterfield was a club stalwart. A dependable but resolutely unglamorous player. Across the course of eight years at Palace, he made 269 appearances in all competitions, scoring 10 goals. Three of them came in the space of just six minutes and 48 seconds during an FA Cup fourth-round replay against Wolverhampton Wanderers. Before that night in February 2010, he hadn’t scored in over a year.

As well as things had gone for him in training, Butterfield was still shocked when he heard Warnock announce the starting line-up.

“He came into the dressing room and gave his team out. I was obviously listening out for right-back and he was playing Nathaniel Clyne. I thought, ‘Well, I’m not playing then.’

“Then he said, ‘And across the front, we’ll have Butts, Alan and Darren (Ambrose).’ It was like, ‘Wow.’ It was completely unexpected. A few of the lads were laughing. It was typical of Neil Warnock to think of something like that, completely out the blue.” 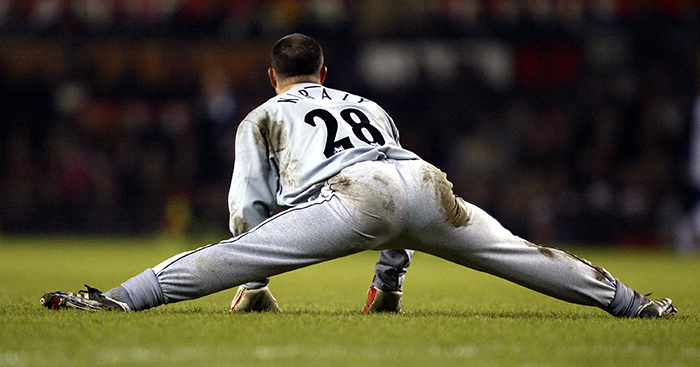 Although Palace were enjoying a welcome distraction from league duties and a 10-point deduction that had drawn them into the relegation battle at the bottom of the Championship, this was still a televised match with valuable prize money on the line for the winner. Victory could help ease some of the financial pressure they were feeling.

As a Premier League side, Wolves were expected to progress even though they had trailed for long periods in the original tie at Molineux. But Butterfield always had faith in Palace’s team spirit and mental strength to pull them through whatever situation they faced.

“We had a very good squad,” he says. “Not only technical ability, but we also had the mentality and the drive and the characters in the dressing room. If I was to pick a squad that I’ve been part of in my career to face adversity, and be in the position that we found ourselves in, that was definitely the one that was cut out for it.

“You had characters like Clint Hill, Matty Lawrence, Shaun Derry, Alan Lee, Paddy McCarthy, Darren Ambrose, Neil Danns. All these players had strong mentalities. It was always going to be a fight, but we had a squad that was cut out for it.” 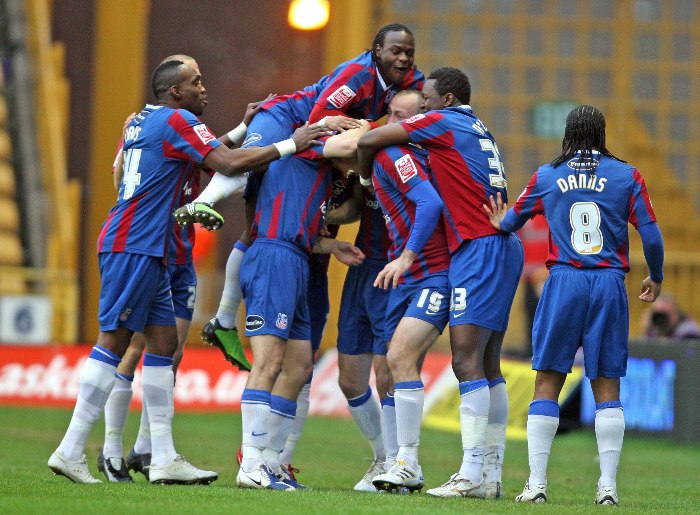 Alongside these experienced players, there was also a smattering of homegrown youngsters. Victor Moses had already left, but Sean Scannell, Nathaniel Clyne and a 17-year-old Wilfried Zaha, who would soon make his debut, remained. They brought a zest and fearlessness to proceedings.

“Neil always offered a fine balance. He always had a core of leaders on the pitch and I suppose it was probably an easy environment for a youngster to come into. We would take all the hits and the pressure. They came into the team and we looked after them,” says Butterfield.

“It was a nice platform for them to go and flourish and express themselves without having to worry too much about the horrible side of the game. The nitty gritty. They did really well. Sometimes, when you’re in a pressure situation, that lack of fear brings extra energy and spice to the team.”

Butterfield had played as a striker at youth level, but this was a different challenge entirely. Thrown in at the deep end, with no time to prepare, he was simply encouraged to put himself about and be a nuisance. Palace would play direct to Lee, and Butterfield would feed off his flick-ons.

At least that was the plan. In the first half, it didn’t work. Butterfield was struggling to have any impact and feared he would be taken off at the break. Thankfully, Warnock persevered with him. Just after the hour mark he transformed a goalless game and earned himself a permanent spot in Palace folklore.

“We had a period of play where it was all us,” he says. “The ball was going through Alan Lee and I knew that he only needed to get a couple of touches on things for me to have a chance.

“We got a corner and Matty Lawrence crashed an unbelievable header at goal. It was saved and I was obviously the player on the goalkeeper, so I got a nice little nod-in to start me off. Soon after, Alan won a header, it bounced through and I managed to slide one under the keeper.”

Wayne Hennessey had been beaten twice in quick succession, first with a header and then a right-footed shot. From a long punt upfield by Palace stopper Julian Speroni, Butterfield read another of Lee’s flick-ons and turned the ball in smartly with his left foot to complete a hat-trick. From first goal to last, it was the quickest in the club’s history.

Nobody could quite believe what was happening. The reaction was one of amusement and disbelief.

“I’m really close friends with Shaun Derry and I can remember looking back down the pitch at him in midfield. He just kept looking at me and laughing. He was obviously pleased for me, but at the same time it was sort of, ‘Butts, you don’t do this. What are you doing?’

“I suppose it felt like being back in the playground as a kid. I had nothing to lose. I was scoring, which was not my normal game, and it just became about fun and enjoyment as opposed to the pressure of a normal game.” 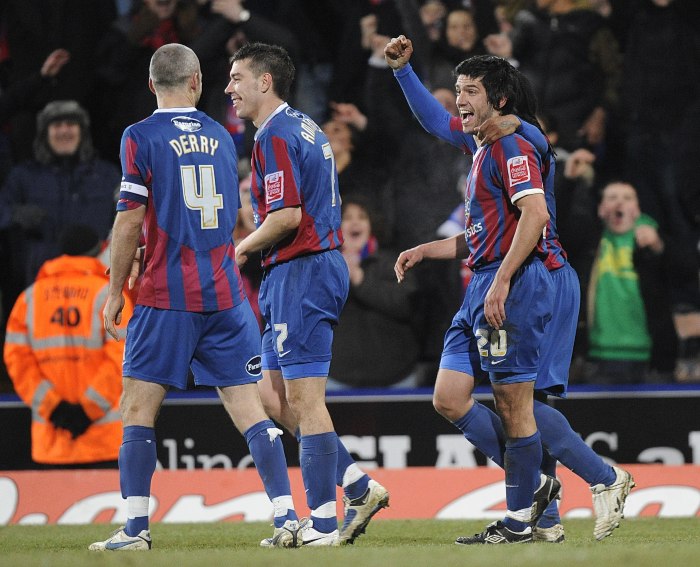 Karl Henry pulled a goal back for Wolves in injury time, but the night belonged to Butterfield. A popular and ebullient member of the Palace squad but never one to court publicity, he was content for Neil Warnock to take much of the acclaim from the media for his tactical masterstroke.

There were a couple of interviews, including a piece with Mark Bright on Football Focus, before normal service resumed. The madness of that match subsided, Butterfield went back to his usual position, and surviving relegation became the priority, particularly once the Eagles had been knocked out of the FA Cup by Aston Villa after a fifth-round replay.

Warnock left the club soon after, with Paul Hart taking caretaker charge for the rest of the season. On the final day, the Eagles took on Sheffield Wednesday at Hillsborough to decide their fates. The home side needed to win, but Palace held on for a vital 2-2 draw despite a late onslaught.

“It was massive for the club,” says Butterfield. “We’d gone from being on the brink of the play-offs in December to having a points deduction and fighting relegation, which was hard. We were in a bit of a false position, but we still had to fight for our lives.

“It was a big relief, but because of our team spirit and togetherness, we felt we were always going to stay up. We knew that we were going into that game strong and had a great chance of survival with the calibre of players we had and the mentality within the group.”

That turned out to be Butterfield’s last match in a Palace shirt, bringing his long association with the club to an end. Supporters had always admired his hard work and commitment, but the absurdity of him scoring a perfect hat-trick while operating as a makeshift striker became the abiding memory of his Palace career. A moment of unbridled joy in a strange and difficult season.

In a curious twist of fate, it might never have happened if the transfer window had gone to plan. Eager to raise funds after entering administration, Palace had agreed to sell Nathaniel Clyne to Wolves, but the deal fell through late on.

Had it been completed, Butterfield would almost certainly have been at right-back and a piece of history would have gone unwritten.