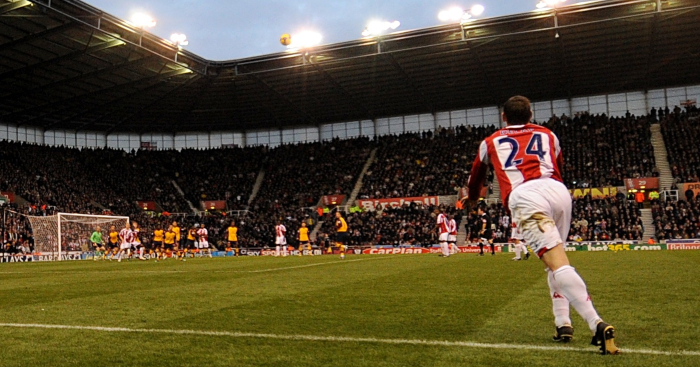 It’s fair to say that Stoke City ruffled quite a few feathers after winning promotion to the Premier League under Tony Pulis – and it’s also fair to say the manager, players and fans absolutely loved it.

Added to that the intimidating atmosphere at the Britannia Stadium and the question ‘can they do it on a cold, rainy night in Stoke?’ and the Potters became one of the cult Premier League teams of the 2000s.

Speaking on the Planet Football podcast, The Broken Metatarsal, former Stoke defender Danny Higginbotham believes there was a fear factor for opposition teams to visit the Britannia.

“We would go into the dressing rooms after the games and we’d talk among ourselves that we would have hated to have played against Stoke if we were other teams. It was just a nightmare. It must have been so difficult to play against.”

One team who found the trip to the Britannia particularly difficult was Arsene Wenger’s Arsenal, with Stoke beating the Gunners five times at home including one victory in the FA Cup.

The first meeting between the two sides in the Premier League set the tone for future clashes, as Stoke triumphed 2-1 thanks to two goals courtesy of Delap throws. The tactic was so effective, Wenger proposed banning throw-ins and instead have them taken by foot, suggesting Delap had an “unfair advantage”.

But it wasn’t just throw-ins Stoke used to unsettle Arsenal.

“It was a situation where they didn’t want to be there, which you can understand,” Higginbotham says. “It was a ferocious atmosphere. It was a hiding to nothing where if they won, everyone’s like, ‘Yeah, you’re expected to win.’ If they get beat then it turns into a crisis.

“The pitch was obviously made smaller. We would have certain games where the day before we would train on the pitch and have eight/nine-a-side down the middle of the pitch. By the time Saturday came, when you’re playing against these top players, instead of them being able to get the ball, take one touch and pass it off, or just pass it off straight away, they weren’t able to do that because it was so bobbly down the middle of the pitch because of what we’d done the previous day. 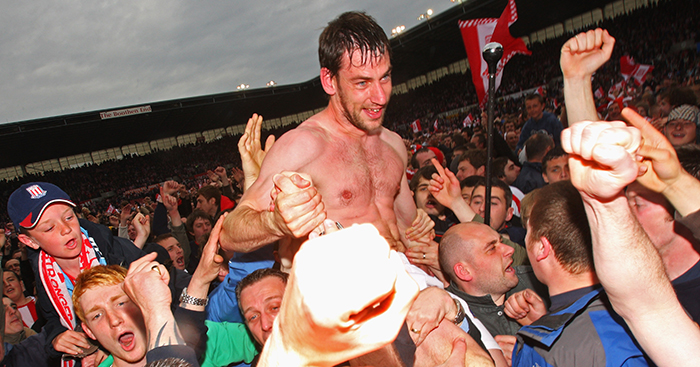 “Yes, we had to make sure that we stood up to be counted on the matchday, but there’s things that we did before the game actually took part, just to give you an advantage. It’s something that you have to use.

“With Arsenal, we knew that we had to be in their faces, we had to make sure that whoever we were marking the first challenge had to be a good one to let them know that we were there, and if they were going to beat us they would have to out-fight us first.

“That was something that United and Chelsea in that period did really well against us, but Arsenal, because they’re a completely different team the way they like to play didn’t like that physical side.”

At a later fixture, Stoke fans mocked the Arsenal boss by singing ‘let’s all do the Wenger’ while mimicking his touchline gestures. The next time the Gunners visited the Britannia, Wenger refused to leave the dugout.

This all helped Stoke as a club create a siege mentality, which was there from the very start when Paddy Power paid out on their relegation after they lost their first Premier League outing, a 3-1 defeat at Bolton.

“We loved people writing us off,” Higginbotham says. “Anybody who was signed by the club at the time and anybody who was part of the team that got promoted from the Championship, we never had any talk of being relegated.

“We loved it. Arsene Wenger, when he said the ‘rugby team’ and what have you, most people would see that as an insult. We didn’t care; in a roundabout way it was a backhanded compliment because you’d actually got to one of the best managers in the world.

“Then you had Sir Alex Ferguson coming in towards the back end of the season. If I remember right that was the Boxing Day game when they beat us in the last couple of minutes. The end of that season Sir Alex Ferguson came out and said that was arguably one of the toughest games they’d had all season.

“This was against a team that had just been promoted.”

Higginbotham delved even further into the finest details Pulis would use to Stoke’s advantage in the latest episode of The Broken Metatarsal, which you can listen to below.