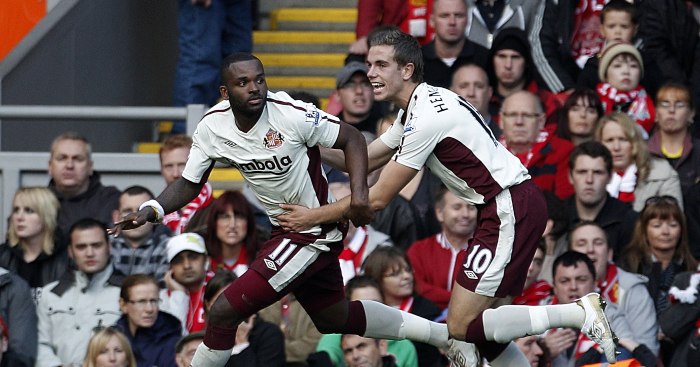 In his first 11 Premier League appearances against Liverpool, Bent scored five times. But as Bent well knows, speaking to us ahead of the return of the EFL on Quest highlights show, one of those goals is spoken about more than any other.

We don’t need to tell you which. You can picture it now: the fifth minute at the Stadium of Light, the ball breaking loose to Bent inside Liverpool’s penalty area, the swing of the right boot and the deflection of the Nike Total 90 football off a beach ball thrown onto the pitch by a Liverpool fan, Pepe Reina’s all too late realisation that he tried to save the wrong ball.

Speaking ahead of the return of the EFL on Quest highlights show, Bent can’t help but laugh to himself when we start to bring up the goal.

“I didn’t realise it was so early [in the game],” he says. “After I hit it and it went in I didn’t even think of anything else.

“I didn’t even think, ‘Oh my goodness, I’ve just hit a beach ball!’ I just thought, ‘Yes, another goal! That’s another one ticked off the list, let’s try and get another goal.’ That’s just how my mentality was.

“It’s only afterwards and years later – it’s the one thing people best remember me for.”

Given he’s been asked about the goal countless times in the years since, would he have preferred the incident never to have happened so he doesn’t have to keep answering questions about it?

Bent laughs again. While he admits the goal shouldn’t have stood, the striker’s instinct remains: “Listen, a goal’s a goal!”

While Bent was happy to act as the scourge of Liverpool, the former England international witnessed first-hand the development of the man who has ultimately captained the Merseyside club to a sixth Champions League crown and that long-awaited Premier League title.

EFL on Quest is on Saturday’s at 9pm and throughout the season on Wednesdays at 10.30pm for midweek fixtures. Stream live and catch-up on dplay.

Jordan Henderson made his first two appearances for Sunderland in 2008-09. Bent’s arrival in the following summer coincided with the midfielder cementing his place in the Black Cats’ side. Seventy-seven appearances in all competitions over the next two campaigns followed as Henderson earned a £20million move to Liverpool.

“Jordan always had the temperament and the work ethic to go to the very top,” Bent says. “We might have had a few more technical and talented players in the team, but if I had to pick a team he would have been in it.

“He’d run, he’d work hard, he’d get you a goal, he could create. But his willingness to work hard and do really well – you just knew he wasn’t going to settle for average and was going to the very top. And he knew that he could stay there.

“For me he was top, top draw and it was a privilege to watch him develop and grow into the player he is today. We all knew he was capable of it, but it was about whether he believed in himself enough to go out and do it.

“He’s obviously shown that he does because he’s a key component in Liverpool’s dominance in the last couple of years.”