Dean Ashton on Stoke interest of 2009: I was in no fit state to move anywhere 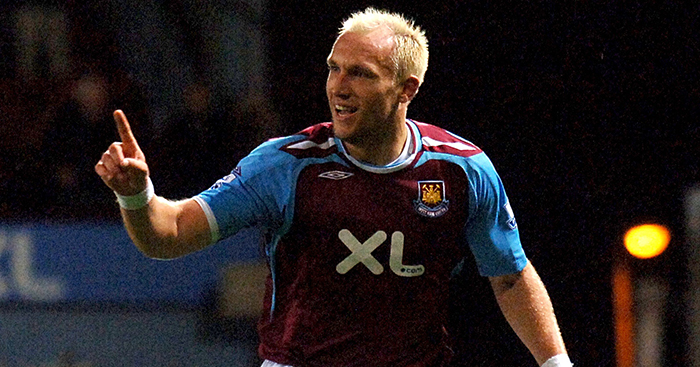 Type in ‘Dean Ashton Stoke‘ into Google and you will find reports from pretty much every national newspaper and website going suggesting Tony Pulis wanted to sign him from West Ham in 2009.

Yet, speaking ahead of the return of the EFL on Quest highlights show this Saturday, Ashton says it was never going to happen for one crucial reason: his body had already given up on him.

A player we’ve previously described as the best striker England never had, Ashton’s story is well-known. Strong and powerful but with a subtlety you might not immediately expect, he had gone from Crewe to Norwich and then West Ham and was all set to make his England debut in 2006 only for an ankle injury suffered in training to not only rule him out of the friendly against Greece but effectively start the beginning of the end of his entire career.

After missing the whole 2006-07 season, Ashton did return to score 11 goals in 2007-08, finally making his England debut against Trinidad & Tobago at the end of that campaign, but he’d never fully shaken off the injury.

West Ham clearly thought he had, handing Ashton a new five-year contract that summer, but early into the following season he injured his ankle in training again, and this time it proved to be the end.

He did not officially announce his retirement until December 2009, but he had not played since a game against West Brom in September 2008 when, with just 19 minutes gone, he walked off the pitch to have a cut ear stitched up then prepared to come back on only to find caretaker manager Kevin Keen had already substituted him.

The next week, Gianfranco Zola was appointed, Ashton got injured in the Italian’s very first training session, and that was that for his career. He was 24.

But it didn’t stop Pulis from making enquiries at the end of that season to see whether Ashton had anything left in the tank. The answer, as it turns out, was no.

“West Ham felt as if they’d gone far enough with me, and rightly so because of the injuries I’d had,” Ashton says.

“I’d had a couple of operations that had failed, but Ricardo Fuller had almost had experts say that his career was finished, and Stoke took him on so there were some rumblings that I’d heard as well.

“I spoke to Tony Pulis, but at that point I was in no fit state to move anywhere so there was never going to be anything in that sense because I was basically on the edge of retirement.

“If Stoke had looked at any sort of x-rays or anything like that…there was no place for me on a football pitch at that point.”

Nowadays Ashton is enjoying his work in the media as an EFL pundit. And he thinks the club he never ended up joining, Stoke, could have a say at the top of the table this season despite finishing 16th and 15th in their first two seasons back in the Championship.

“My bold prediction is Stoke to go up,” Ashton says. “I think if you look at Michael O’Neill’s record since he come in, it’s more like play-off form.

“A couple of additions that he’s bought in, Steven Fletcher especially, I think could be key.

“They would be my outsiders. At the moment I would expect Watford, Norwich and Brentford to all be too strong and I could see them three surging ahead, but that might depend on if any of their players get sold.”

EFL on Quest returns this Saturday at 9pm and throughout the season on Wednesdays at 10.30pm for midweek fixtures. Stream live and catch-up on dplay.

Ashton did consider a career in coaching, rather than the media, at one stage, but having had his career snatched away from him, it’s perhaps unsurprising that he found it difficult to be out on the training field. Still only 36, he could theoretically still have been playing had things gone differently.

“I rarely, rarely put the boots on, and as the years go on I do it less and less because it’s just not worth it,” he says.

“It’s not my ankle that’s the problem, it’s the rest of me. Because of my ankle, it feeds up to the rest of my body. If I played five-a-side one night I’d have to give myself three weeks before I could possibly even think about playing, and that’s just not worth it.

“In terms of coaching, I have looked at that. I went into Norwich, I looked at doing my UEFA B, but it didn’t feel right. I wasn’t comfortable. I couldn’t stop thinking about me not playing and that’s not a place I want to be in and it’s not fair to the people you’re coaching.

“I’ve always loved the games, it’s what I thrived off when I was playing, so to be involved on the media side, talking about the games, it’s the second best thing for me.”

As for whether he could offer guidance to young players who too may find their career taken away from them, Ashton thinks it’s important to prepare kids for the ups and downs of football but doubts whether he is the right person to give such advice.

“There are plenty of players, not just me, who’ve had the experiences, but will they (young players) listen?” Ashton says. “Would I have listened when I was young? I’m not too sure.

“If I was to speak to a 17 or 18-year-old now, they wouldn’t know who I am. They would have no idea, probably, whether I played football because it’s 12 years since I played so they’d only have been five.

“It always is going to be crucial because the highs and lows that you have in football are just so vast that if you’re not ready for them or be able to cope with them, we’ve seen with many young players the struggles that they can have.

“But it would need current players rather than ex-players to make that difference, I think. I know they’ve got enough on their plate already, but I think current players are who young players would really listen to.”