Thomas Sorensen recalls his Stoke journey from Portakabins to Europe 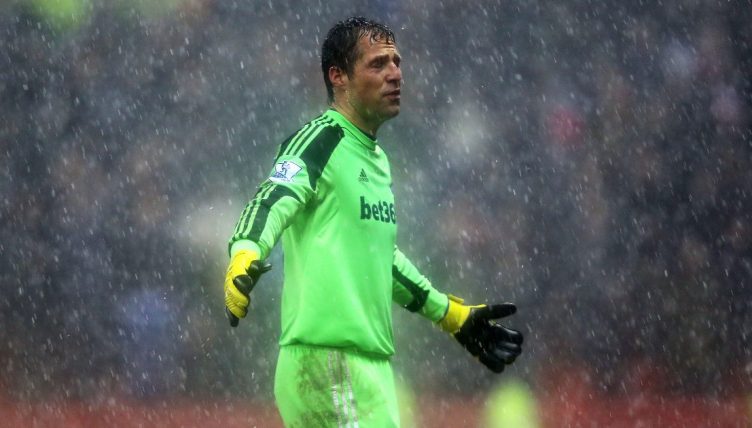 When Stoke City won promotion to the Premier League in 2008, you could have been forgiven for doubting they would stay in the top-flight for 10 years.

Stoke had won automatic promotion from the Championship behind West Brom, but while many believed the Baggies would prosper in the top flight under Tony Mowbray, few predicted anything other than a swift return back to the second tier for City.

Tony Pulis, of course, had other ideas and recruited a number of experienced players to help lead the club to safety.

And despite one bookmaker famously paying out on bets for them to be relegated after a 3-1 defeat at Bolton on the opening day, the Potters finished 12th in their first top-flight season since 1985. West Brom were relegated.

Remarkably, Stoke remained in the Premier League until 2018. The only other teams to remain ever-present for those 10 years were Arsenal, Chelsea, Everton, Liverpool, Manchester City, Manchester United and Tottenham.

Such a scenario would have seemed unthinkable to many when Stoke were first promoted…including those associated with the club.

Based on his early experiences in the Potteries, it’s unlikely Thomas Sorensen would have predicted it when he was persuaded to join the club from Aston Villa that summer.

“I’d gone from Villa, who were a very traditional club in the respect they had been in the best league for many years, winning the European Cup back in the 80s to Stoke, who were on the up but still not at the professional level you’d expect in all aspects of how a club should be run,” Sorensen says.

“I remember the first day I was there. It was a burning hot day. I asked for a spare kit after we’d trained and was told to go lay myself in the sun so it could dry before we trained again in the afternoon. That was a little bit of an eye-opener.

“We were getting changed in Portakabins, it was before the new training ground was built, so it was a big change (from Villa), but there was a lot of great people there and everyone was really working hard to be successful.

“From a football perspective, it was a great environment.”

Sorensen would turn out to be one of the best signings Pulis ever made during his time at Stoke, but the Dane’s career could have been ended altogether in only his sixth appearance for the club following a late challenge from Alan Hutton for which the Tottenham defender later apologised.

“It was a bit of a close call,” Sorensen says. “I could have lost an eye and had 15 stitches just around the eyeball, but these things happen, it’s part of the game.

“You try to protect yourself as much as you can, but if your luck is out, like Petr Cech, it (goalkeeper) is a dangerous position. It’s probably the closest call I’ve had to having a really serious injury, but luckily I escaped with not too much damage.” 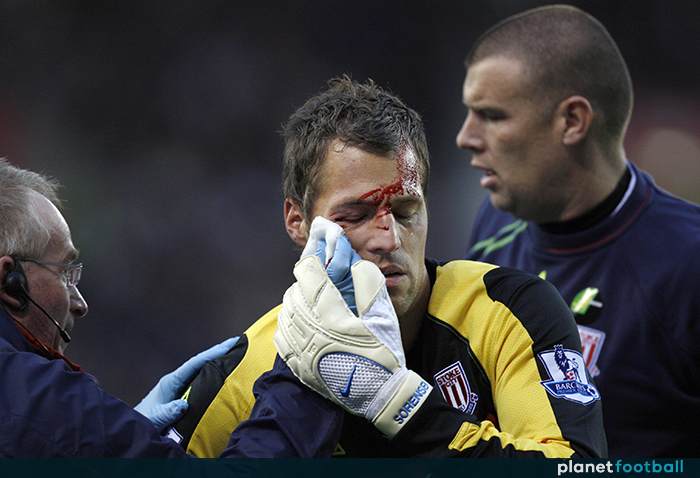 Stoke beat Spurs 2-1 at the Britannia Stadium that day, recording their second win of the campaign having beaten Villa 3-2 in their first home game, and remarkably Sorensen was back between the sticks the following weekend for a 3-0 defeat at Manchester City in which Robinho scored a hat-trick.

The Potters were in the relegation zone at that point but followed up the success against Spurs with wins in their next three home games, too. Of their 12 victories in the Premier League that season, 10 came at the Britannia Stadium as both players and fans bought into the siege mentality Pulis had created.

“I think Tony Pulis was very clever in the way he went about things,” Sorensen says. “He looked at the players we had at the time, there wasn’t any pressure for him to entertain, it was all about staying in the Premier League.

“We weren’t hailed for our beautiful football, that’s for sure, but it was very effective and everyone hated coming to Stoke with Rory Delap’s long throw, so we gained a foothold by being a really, really tough unit.

“And the fans were amazing, it was like playing with 12 men whenever we played at the Britannia.”

Sorensen remained first choice for Stoke during their second Premier League season when they improved to finish 11th, only three points off ninth, but come the third he was usurped as top dog by Asmir Begovic.

However, being second choice that season provided Sorensen with one of the highlights of his career as, having been given cup duties, he got to play in their first major final of his career.

Stoke were beaten 1-0 at Wembley by Manchester City, Yaya Toure’s goal earning Roberto Mancini’s side their first piece of silverware of the Sheikh Mansour era, but Sorensen at least had the consolation of a fine personal performance in which he made several outstanding saves. 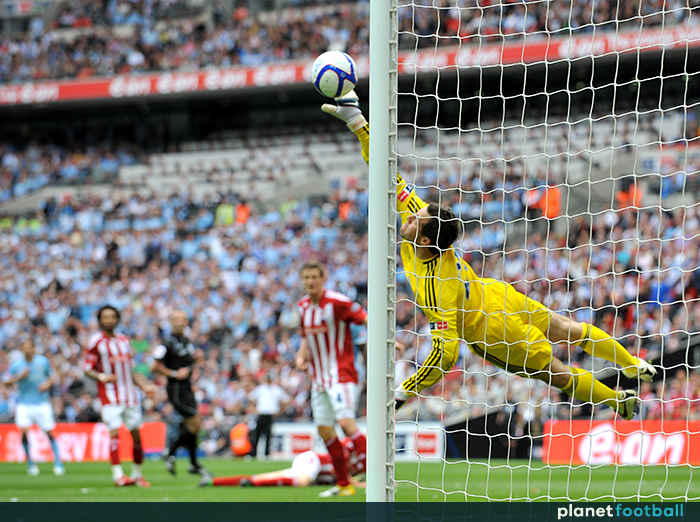 “Reaching the FA Cup final in 2011 was a big thing for all of us,” he says. “For me, I’d had a long career, I hadn’t really played in a final before so to have the chance to play in a final I’d watched since I was a little kid back in Denmark, that was huge.

“It was a great occasion. Looking back on it I’m disappointed that we didn’t win, but I had a good game so I look back on it fondly.

“It’s one of those things I am happy to share at a later date in my career, as I could share it with my family. It really stands out as being one of the great days of my time at Stoke.”

Sorensen remained second choice behind Begovic for much of the 2011-12 season, but once again it came with a nice consolation prize as Stoke competed in the Europa League and made it through two rounds of qualifying and then a tough group containing Besiktas, Dynamo Kiev and Maccabi Tel Aviv.

Their continental journey ended in the last 32 against Valencia courtesy of 1-0 defeats in both legs to a side who had finished third in La Liga the previous season.

No disgrace, certainly, but it is something of a sore point for many Stoke fans, with Pulis leaving several stars at home for the second leg in Spain and naming only four of a possible seven subs, including young Lucas Dawson, who would never make an appearance for the club. 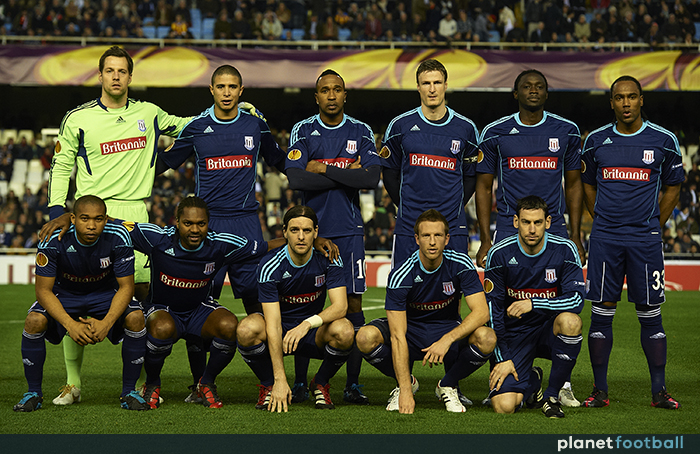 Sorensen would not criticise Pulis, however, and says his only regret is that the players who did make the journey to the Mestalla did not make the most of the better chances on the night.

“Looking back at it we should have won the game in Valencia, we had enough chances to progress,” Sorensen says.

“It would have been a big upset as Valencia were in a better position than they are now – although maybe they are gaining a bit of momentum again this season.

“I just remember it was a great experience for the fans and the club. We had 10,000 Stoke fans in Valencia to watch the game, so everyone had a tremendous time. We were disappointed, it was a great time for the club to be in Europe. I look back on it fondly.”

In the absence of European football or any great cup run, combined with the emergence of Jack Butland, Sorensen’s appearances would dwindle in his final three seasons at Stoke, but he certainly didn’t begrudge handing over the gloves to Begovic when he did.

“He came in, he had a tremendous attitude, so we really fitted well together as a team. I am still good friends with him and still keep in contact with him now.

“As time went on and I was getting older, he came in and did really well. Those things happen and I accepted that he had great potential and was going to move onto big things. I have no regrets, he was great competition for me. I am sure he’d say the same.”

Sorensen eventually left Stoke after seven seasons in 2015 for Melbourne City where he would play out the final two seasons of his career.

He is now working towards becoming a coach and is currently helping the Australian club’s young players, passing on what he’s learned from his many years in the sport.

“I am getting my badges, I am working as a mentor with some of the young players, working closely with them to try and adapt them to the professional game and senior football, to maximise their potential with goalsetting and really making it clear what they need to do to get where they want to get to.

“A lot of kids lack direction, they don’t know what it’s about, but I’ve got the experience to share with them.”

Having assisted the likes of Begovic and Butland, not to mention spending seven years watching an entire club evolve, Sorensen is surely the ideal man to help individuals develop.