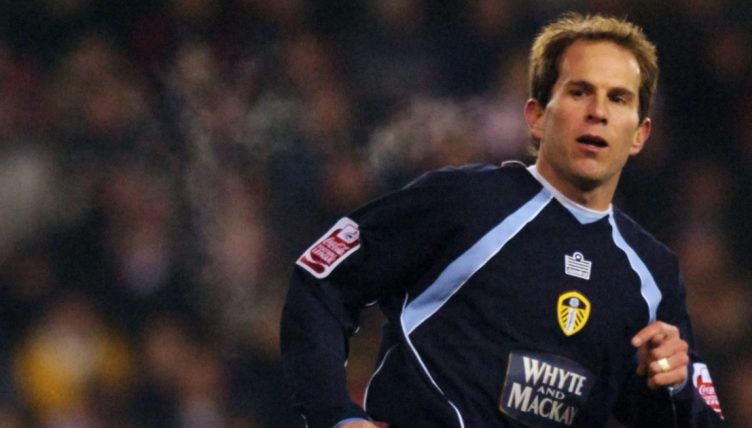 Ask any long-suffering fan of Leeds United their fondest memories of supporting the club, and you’re unlikely to hear much about the mid-noughties.

Yet that’s the period in which former USA international Eddie Lewis, now an entrepreneur and founder of innovative football training platform TOCA Football, spent at Elland Road – and he loved every minute.

It was a particularly tumultuous time for Leeds, English football’s poster boys for riches-to-rags financial ruin.

As the doing-a-Leeds fable goes, the club saw in the new millennium top of the Premier League and went on to mix it with Europe’s elite in the run to the Champions League semi-finals in 2001.

Come 2005 they were scrambling around in the ruins left by Peter Ridsdale to build a squad capable of competing in the second tier. Here’s where Lewis comes in.

“For me, [looking back], there are so many emotions. I’d just come off losing in the play-off final [with Preston], being a game away from being back in the Premier League,” Lewis recalls.

Out went the likes Paul Robinson, Alan Smith, Mark Viduka, Ian Harte and Dominic Matteo and in came Football League stalwarts like Sean Gregan, Jermaine Wright and Shaun Derry. Splashing out on the likes of Rio Ferdinand was a distant memory – all the new incomings arrived for free or a relative pittance. This was the new reality.

The new-look, hodgepodge Leeds unsurprisingly struggled to adapt, finishing a lowly 14th in their first season back in the second tier, newly rebranded as the Championship.

They were closer to relegated Gillingham than the top six, 15 points behind Lewis’ Preston, who finished fifth and were beaten 1-0 by Alan Pardew’s West Ham in the 2005 play-off final.

After three years and over 100 appearances for Preston, the American left at the end of his contract and took on a new challenge at Leeds, arriving alongside Rui Marques, Richard Cresswell, Rob Hulse and Robbie Blake.

“Although Leeds hadn’t done as well the year before, there was a real desire for the club to assemble a squad that could,” says Lewis.

“That was exciting to me, and to be honest once I got to the club, for the first time in England I felt like I was part of something big.

“This was like what I watched on TV and read about, whether it was the fans or the culture around the club, the feeling around the city, I really felt for the first time that this is it. I think that spirit was shared around a lot of the team, I tried to bring a lot of my spirit to it, and I think the first year was incredibly exciting.”

Long-since evident that the club’s status counted for nothing, and so far off the pace the season prior, few gave Leeds a chance of competing for promotion.

They’d lost rising academy star Aaron Lennon for a meagre £1million fee to Tottenham and their frugal spending in the transfer market had been dictated by necessity once again.

With Neil Warnock’s former favourite goalkeeper Kevin Blackwell at the helm, Leeds were anything but sophisticated, but they were competitive. David Healy, Hulse and Blake all hit double figures that 2005-06 campaign, while Lewis – a diligent professional out on the left-wing – contributed a few important goals in his debut season.

Leeds comfortably finished in the play-offs, fifth, and might have even gone up automatically were it not for a late-season collapse with one win from their last 10 league games.

Their opponents in the semi-finals? Billy Davies’ Preston, Lewis’ former side, who were determined to resolve their play-off anguish from the season before.

A young David Nugent gave the Lancashire outfit the lead in the first leg, only for Lewis to strike back with a superb free-kick – a goal that produced one of the loudest roars of the last 20 years at Elland Road.

14 years ago today, Eddie Lewis' free-kick made it level in the play-off first leg vs Preston 🎯 #LUFC pic.twitter.com/kWnvqwz4ij

Despite the 1-1 draw in Leeds, leaving the tie hanging in the balance, Davies infamously declared “job done”. Preston had beaten Leeds 2-0 at Deepdale on the final day of the regular season, and the Preston manager was evidently confident there’d be a repeat.

The statement earned Davies, Lewis’ former boss, the role of pantomime villain in Leeds. In a classic of the genre, Blackwell wrote the words ‘job done’ on a poster in the dressing room at Deepdale, and a fired-up Leeds won 2-0 to book their place in the final.

“Obviously I have a ton of respect for Billy and I think he was just so gutted at our ability to come back and the fact that free-kick went in, he couldn’t help himself.

“It was definitely the worst thing he could have said. Already going into it there was a strong belief, but being able to use those words as motivation just put it over the top. There was never going to be a doubt going away for that second leg that it wasn’t going to be a one-way affair.”

One step away from a return to the Premier League after just two years away, Leeds choked at the Millenium Stadium in Cardiff, failing to turn up for the occasion in a deserved 3-0 defeat to Watford.

“There’s probably things in life that you can never properly describe it until they’ve been through it or experienced it. For me personally, the year before hurt, but I kind of felt like the better team may have won,” says Lewis.

“In the Watford game, I really felt like we let ourselves down, and that was a tough pill to swallow for a long time. At the end of the day, it’s football and it happens but for many of us, that was a real moment you wish you could have back again because it shouldn’t have gone that way.”

It was to be another 13 years before Leeds made it back to the Championship play-offs, and another 14 before they finally returned to the top flight.

Unlike Marcelo Bielsa’s Leeds, who were galvanised by the trauma of their semi-final defeat to Derby and went on to top the Championship table the following year, Lewis’ Leeds failed to push on, instead taking several steps backwards.

“When I look back, I have a hard time understanding how those two years were so dramatically different – all kinds of things going on outside of the pitch – but I honestly loved every minute of my time at Leeds, both the good and the not-so-great parts.”

“There was a fairly large hangover from that loss, which carried on until the beginning of the following season, but I think there was still plenty of belief in terms of the quality of the squad.

“But there were so many things happening outside the pitch that were trickling their way down to the dressing room and onto the pitch that at some point it became too much for a lot of the squad.”

Losing 26 of 46 games, Leeds were relegated to League One at the end of the 2006-07 season, falling to the third tier for the first time in the club’s history. To add insult to injury, under the stewardship of Ken Bates, the club entered administration and incurred a 10-point penalty, which saw them finish at the foot of the table. 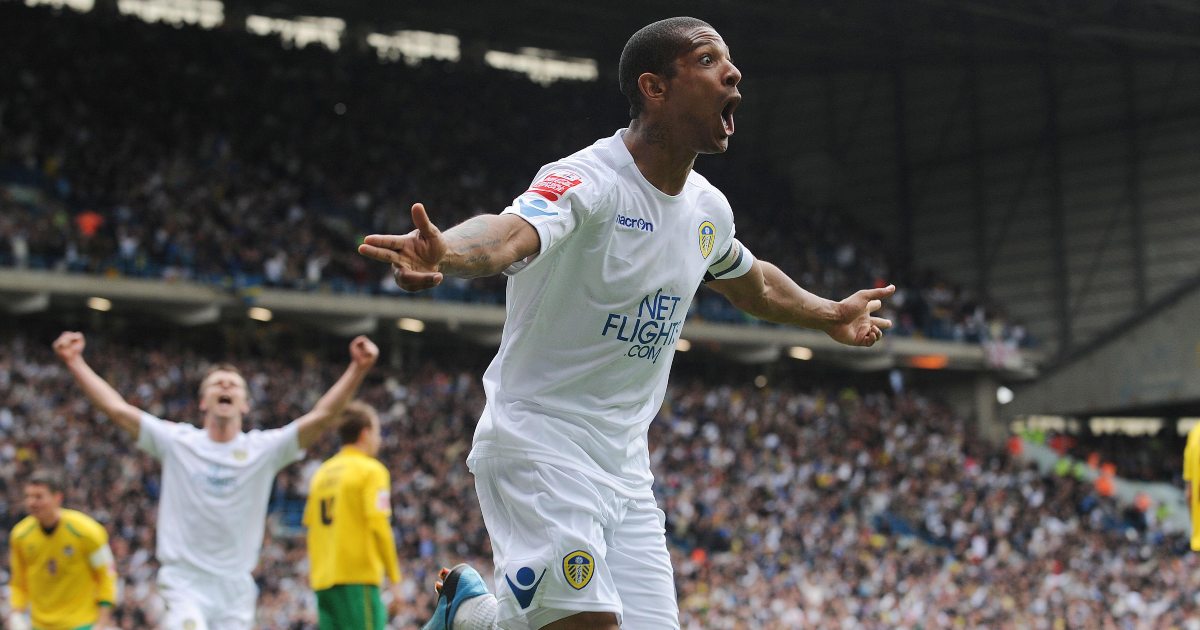 Lewis was one of few figures to escape the rock-bottom low of Leeds’ relegation campaign with any credit in the bank, having been voted the fans’ Player of the Year. He then left to reunite with Davies at Derby, newly-promoted to the Premier League.

“As a footballer you’re always giving your best, and that doesn’t change regardless of what’s happening or how the team’s doing, that’s not going to change my level of effort.

The former winger, 47, hasn’t lost his passion for the game after retiring as a professional in 2010, having seen out his career playing alongside David Beckham at LA Galaxy.

In 2016, Lewis founded TOCA Football, an immersive experience that combines the chance to show off your football skills in a social setting, complete with great dining and drinks.

TOCA Social opened its first branch in the UK back in August, with local Premier League stars including Michail Antonio and Trevoh Chalobah among those who have sampled the experience at The 02 in Greenwich.

“As a former footballer, you always want to stay connected to the game in some way. We love the sport, we love promoting the sport,” says Lewis.

“Football means different things to different people, and I’m just really proud of the fact we’ve been able to keep people connected to the sport in a way that hasn’t been done before.

“To be able to do it with your friends, on a night out, sharing those times together, wrapped around the game we all love, for me it’s a huge accomplishment and something I’m really excited to continue to bring to the rest of the world.”

‘You lads will go down in folklore’: The inside story of Man Utd 0-1 Leeds