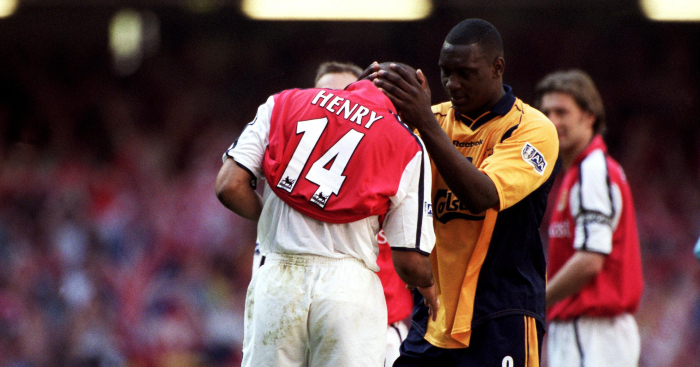 When Emile Heskey looks back on a career that includes so many highs for club and country, the medal he collected on a famous FA Cup final afternoon in Cardiff shines brightest.

The date was May 12, 2001, and with Wembley being redeveloped, the finale of England’s iconic cup competition was staged at Cardiff’s Millennium Stadium for the first time, with Gerard Houllier’s Liverpool going head-to-head with Arsene Wenger’s powerful Arsenal side.

In truth, the world witnessed something of a mismatch as Arsenal dominated the game and should have been out of sight  – Stephane Henchoz was lucky to escape a red card after denying Thierry Henry a goal with his hand – before Michael Owen turned the game on its head with a late equaliser followed by a famous winner moments later.

The game was instantly christened as the ‘Owen Final’, and Heskey, Owen’s strike partner that afternoon, is more than happy to let the Liverpool’s No.10 on the day to take all the glory.

“We rode our luck in that game,” says Heskey, speaking to Planet Football at a BT Sport event. “It was a tough afternoon for us. We were playing against a great Arsenal side and we were very lucky that VAR wasn’t being used back then because they would have had a penalty and we may have had a sending off as well.

“They had us under pressure for long periods, but everyone remembers it as The Michael Owen Show. We all remember the winning goal. Michael running against Tony Adams, who tries to stop him taking it on to his right foot, but Michael takes it on to his left foot and slots the winner. That is what Michael was all about.”

Ahead of the FA Cup third-round weekend, we can expect to see a host of top Premier League managers fielding under-strength teams in the competition, with Heskey suggesting that approach has tarnished the competition’s image.

“The FA Cup was losing its gloss back in 2001, even though it meant a lot to me,” he says. “If you asked the foreign lads in our Liverpool dressing room then, they would all have said the Premier League or the UEFA Cup. The FA Cup was not high on their list of priorities. Ask the English lads and they all wanted to win the FA Cup.

“We see something similar with managers. I can understand it to an extent because they are under pressure to get results in the Premier League; the FA Cup is not going to keep them in a job.

“We often used to say a manager is 10 games from the sack, but that number might be reduced now. We have a sacking culture in English football now and managers need to get results in the Premier League to keep their jobs. That is their main focus, so you can’t blame them for overlooking the FA Cup.

“For us, we all watched this competition growing up and the idea of playing in the final and winning that trophy was massive for English players.

“You see the giant killings when you are a kid, you see the teams winning the final at Wembley, and that is the dream for every English kid from my generation. It has lost its edge a little bit in recent years; hopefully not, but that seems to be how it is.

“For me, the FA Cup medal I have is one of the best memories of my career. It’s right up there. And the feeling on the day when we beat Arsenal was special.

“It would have been great if that final had been staged at Wembley, but to get your hands on that trophy you have seen so many of your heroes winning was an amazing experience.”