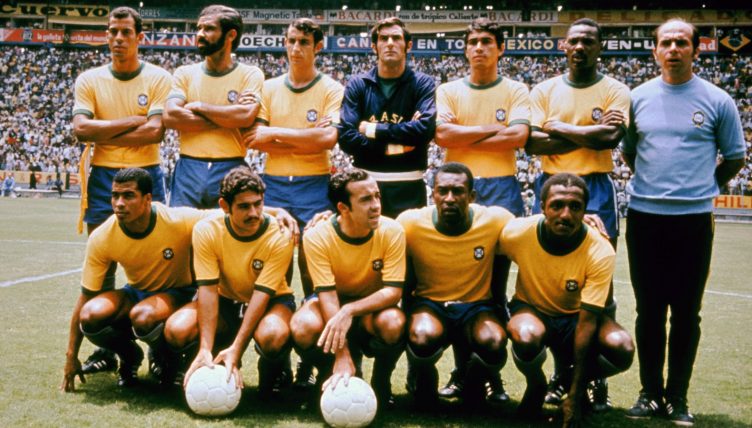 The 1970 World Cup was the greatest show on earth. Even today the tournament is lauded and romanticised as the end of an era when the game was more innocent. Football passed from sporting lore into pop culture: the Telstar, the cotton shirts, the grainy colour footage, the crackling TV commentary and the matches with a goal average of 2.97 − still a post-war record − all belied that the game was at a crossroads.

Professionalism and commercialisation were looming. The sport was globalising. That was the paradox of the 1966 World Cup: while football in northern Europe was on the ascent on the field, the Old Continent was losing its grip on FIFA. Mexico 1970 was the first World Cup outside of Europe and South America. Sceptics argued that the heat and altitude would dull the senses and thwart a level of play befitting a World Cup.

Maybe, initially, they were right. There were stolid matches and stinkers, notably the goalless opener between the hosts and the USSR. In Group 1, the Belgians were lethargic and homesick. In Group 2, Italy navigated past Sweden, Israel and Uruguay in the most economical of ways, with a single goal in their single win.

But their low-scoring group was the exception in a tournament overflowing with goals. In Group 4, Morocco delighted against West Germany, who swept aside Bulgaria 5-2, and the thrilling Peruvians with Teófilo Cubillas in their bright white shirts with a red sash, 3-1.

Even Mexico and the USSR ignited with convincing four-goal victories on matchday two, but amid all the high-scoring matches and a timeless all-star cast, including Franz Beckenbauer, Giacinto Facchetti, Gerd Muller, Gigi Riva, Gianni Rivera, Uwe Seeler and Lev Yashin, there was one match and one cast of dramatis personae that stood out, that would define the tournament: the clash in Group 3 between the defending world champions, England, and the winners of 1958 and 1962, Brazil.

In the build-up, the English had fetishised the issue of altitude, like many of the other participants, whose preparations were a mixture of the highly professional and the outright bizarre. Communist apparatchiks ordered Bulgaria to train in the snow-capped mountains south of Sofia. Israel prepared in Ethiopia. Uruguay spent time in both Quito and Bogota. And so did England. Having attended the 1968 Mexico Olympic Games, Alf Ramsey was, however, mostly worried about the stifling heat in Guadalajara. Team doctor, Dr Neil Phillips, shared his concern.

The English, if still reluctantly, first travelled with a doctor in 1963, whereas Brazil had already taken an expanded backroom staff, including a physician and a psychiatrist to the 1958 World Cup in Sweden. By the end of the 1960s the English medical team still didn’t amount to much. Phillips was a general practitioner, who travelled down from the north to London for England’s matches. As a part-time volunteer, he took a crash course in altitude, heat, tropical diseases and vaccinations.

If the Brazilians had Coutinho and links to NASA, Phillips had Dr Griffith Pugh, the physiologist who scaled Mount Everest with Sir Edmund Hillary! Phillips liaised with academics across England and even with a professor in Addis Ababa. He pondered the use of Streptotriad or Thalazole, two antibiotics, against Mexico’s infamous gastroenteritis. He got involved in the development of a sodium tablet and wrote a handbook with relevant medical advice for the players. Phillips’s devotion to detail couldn’t have been more thorough.

England’s preparations also had a commercial aspect. Zeiss offered state-of-the-art sunglasses for the England team, Findus provided frozen food, Malvern bottled water, Gatorade energy drink and Umbro the Airtex shirts. In all, the preparations were second to none. Phillips and England had − unknowingly − been as thorough as the Brazilians.

The Selecao arrived in Mexico City 32 days before their opening match with Czechoslovakia, prompting Zagallo to claim that Brazil was the first team to arrive but would be the last to leave. None of the players suffered ‘acclimatisation neurosis’; some merely experienced dryness of the throat and mouth. Roberto Miranda, Jairzinho and others reported, on arrival, a bloody nose and other minor discomforts from the rarefied air.

England’s training was progressive: from a cricket match to a five-a-side game, from playing high-altitude matches in Colombia and Ecuador to a last-minute, ultra-intense acclimatisation to Guadalajara’s heat. ‘I was better off in jail,’ muttered Moore once, referring to the infamous shoplifting incident in Bogota.

On 7 June, the day of Brazil vs England, the sun and heat were at their most damaging at 36.6°C. The lunchtime kick-off benefited FIFA’s revenue stream from primetime TV broadcasts in Europe but ignored the players’ welfare. It could actually be dangerous. A 1953 American army edict forbade new recruits to train in temperatures above 29.4°C. Even so, the English were confident. They smiled upon Brazil’s resounding 4-1 victory against Czechoslovakia.

The attitude seemed odd, more so because of England’s laboured 1-0 win against the brutal Romanians. The Brazilians had been imperious and flamboyant: the tabelinhas (one-twos) between Pele and Tostao, Rivellino’s potent left foot, Gerson’s cross-field passes and Jairzinho’s goalscoring prowess showcased their most devastating football since 1958. Brazil were physically superior in the second half, expressive and fluid. Was it a 4-3-3 formation with variations of 4-2-3-1? Zagallo was happy to call it a 4-5-1.

England had been given fair warning but, arrogantly, Alf Ramsey and his men focused on Brazil’s weak defence. Against the Czechoslovakians, Clodoaldo and Brito contrived to allow Petras’s 11th- minute goal. To the English, Brazil’s backline was lax and careless. The Daily Mirror’s Ken Jones ridiculed Brazil’s ‘schoolboy marking’, but that was to miss the point. Brazil applied zonal marking, whereas England defended with slightly loose man-marking.

“Our method of defending was to position ourselves in zones, cover the space and not carry out man-to-man marking,” said Zagallo. “If we had gone with high-pressure marking then by the second half we would have run out of gas. So we saved our energy and dropped back and then when we won possession, the technical quality of our team stood out.”

The Brazilians exploited England’s man-marking, an approach that was simply too exhausting: Tostao moved away from the centre to create space for Pele and Jairzinho. Tostão and Pele weren’t classic centre- forwards, but they dropped back. From the right wing, Jairzinho often drifted towards the centre. They drew defenders and midfielders, such as Alan Mullery, into uncomfortable positions.

Zagallo demonstrated that he was about more than 4-3-3. He understood the modern game, his team knew how to occupy space, dropping back, which fitted the Mexican conditions that required economic football. Ramsey was no less astute. It was an incredible feat for England to keep possession in the heat against an opponent of such tremendous quality, a testimony to the England coach’s tactical sophistication.

More than a simple pragmatist, he borrowed many of his ideas from his days as a progressive right-back in Tottenham’s and coach Arthur Rowe’s ‘push and run’ team in the early 1950s. Ramsey wanted his teams to pass the ball. By playing Peters and Ball as ‘false Nos 7 and 11’ − the Zagallo role − in the ‘Wingless Wonders’ team, he liberated Bobby Charlton, but four years later, in Mexico, Charlton was past his peak. Even if Peters and Ball played in more narrow positions, massing the midfield and accommodating the marauding runs from the full-backs, England simply lacked flair in the final third, the kind of flair Brazil had in abundance.

At the start of the second half, Brazil pressed forward and Jairzinho’s goal was the culmination of loyal interplay and individual talent. They converted their single, major opportunity. The English didn’t capitalise on theirs.

Brazil vs England was framed as a game of opposites – the inventors of the game versus its spiritual masters, the defending world champions versus the old champions, Europe versus South America, best defence versus best attack, regimentation versus artistry, enemy number one versus the fan favourites.

So many strands were woven into the narrative − but it was always going to be a match of finer details, as exemplified in the opening minutes when the teams sounded each other out. At half-time, the English believed victory was still within their grasp.

When England had to chase the game − and they did so with verve and determination − substitute Astle inexplicably scuffed England’s main opportunity. In the 77th minute, Alan Ball struck the woodwork. On the bench Zagallo was anxious: this was the ultimate test for his beleaguered and pilloried defence.

“My God, Brito and Piazza, will they hold out?” wondered the Brazil coach. “And Felix. How will those three hold up? Did the critics get to them? No! The rest of the game proved that we could be champions: a superb attack and a magisterial midfield.”

Astle’s imprecision was symbolic of something that’s often forgotten because of the mythology of the match, including, and not least, Banks’s save and Pele and Moore swapping shirts after the final whistle. In fact, ‘The final that never was …’ was a rather ordinary football match. In Scientific Soccer in the Seventies, Roger MacDonald and Eric Batty precisely argue that Brazil vs England ‘was a tight defensive match in which neither team was prepared to risk it all, for fear that they lose it all. In the context of the competition, it was a dramatic match, an absorbing match, but in pure football terms it was almost ordinary.’

And in many ways it was − the 90 minutes were riddled with inaccurate passes and sloppy defending from the Brazilians as well as a terrible lack of ideas and tactics from the English, who lumped the ball high and long, hardly the ingredients for a World Cup classic. The fact that both England and Brazil played not to lose didn’t help either.

In the end, none of it really mattered: Brazil vs England was a match that defined teams, players and, to an extent, lives. England were on the downslide, on the precipice of decades of mediocrity and self-delusion, ignorant of their reduced global position, whereas Brazil were consolidating their golden age. A third World Cup was within reach.

At Copacabana beach, Jairzinho, until this day, muses about his goal. In his office in Belo Horizonte, Piazza still exults at the thought of having defeated England. Tostao cherishes the match because − for once and for all − it cemented his place among the first XI. Gerson still envies those who played. None of them can forget that victory. All of them will die with it.

The above is an extract from Samindra Kunti’s superb new book Brazil 1970: How the Greatest Team of All Time Won the World Cup

Brazil 1970 is the fascinating and dramatic inside story of the greatest football team of all time. Predicted to be drab and dull, the 1970 World Cup became the greatest show on Earth, with the mesmerising Brazilians at the heart of a dramatic and delirious three weeks. After their demise at the 1966 World Cup, the South Americans were no longer the masters of the game. The defenestration rattled Brazil, and left them in purgatory before they swept through the qualifiers with coach João Saldanha. Even so, the team left their home country discredited against the backdrop of a military dictatorship and the proliferation of science in the game. At the World Cup finals, Mario Zagallo and his cast of balletic players – including lodestar Pele, the cerebral Gerson and the ingenious Tostão – ensured Brazil would forever be synonymous with the global game and a byword for style and craft. Their triumph was also the end of Brazil’s golden era. The technocrats had invaded the terrain and Brazil would never again reach those heights.

Buy it now from Amazon or Waterstones.

READ NEXT: The day Pele escaped a coup in Nigeria by pretending to be a pilot