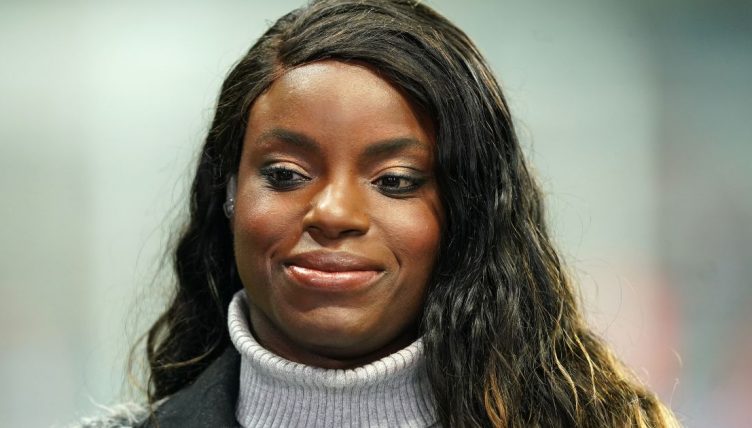 Eniola Aluko is trying to implement a sea change in US women’s soccer. Those are not her words. Not exactly. But hearing her set out her ambitions as sporting director of new NWSL club Angel City, there can be no doubt: she is determined to be different.

And if it is change that Aluko wants, she certainly appears to be starting in the right place.

Angel City will play their first NWSL season in 2022, bringing women’s soccer back to Los Angeles 12 years after Tinseltown’s last team, the Los Angeles Sol, ceased to operate. And they already stand out, thanks to an ownership group that includes Hollywood A-listers, music stars and sports icons.

In May 2021, they offered Aluko the chance not only to buy in but to become the club’s first sporting director.

“It was an opportunity of a lifetime that I couldn’t turn down,” she says. “You don’t really get the opportunity to build something from scratch in football and have equity and ownership within that as well. It kind of came out of the blue, but it was one I think I would regret if I didn’t take it.”

Contrary to what you may expect given their Hollywood setting, Aluko insists Angel City are not going to be a vanity project based on glamour signings.

She is speaking on behalf of eBay’s Dream Transfer campaign, which gives any of the UK’s Sunday league teams the chance to sign Aluko or former Brazil full-back Roberto Carlos for one game. All proceeds go to Football Beyond Borders, a fine organisation that works with young people from disadvantaged backgrounds to provide educational support and promote social inclusion.

And, Aluko says, she is trying to bring a sprinkling of Sunday league to Southern California. “There’s a lot of community involvement in Sunday League football, and I think that connection needs to be recreated again at the top level of sports.”

Before moving to LA, Aluko cut her directorial teeth in her hometown with Aston Villa. She moved into the sporting director role there just a week after announcing her retirement and three months after winning her last trophy as a player, the Supercoppa Italiana with Juventus.

“My first week in the job, the pandemic hit,” she says. “So it was very much a deep dive into all things football administration.”

In their first season after promotion, Aluko’s brief was to keep Villa up. “It was difficult,” she admits, “we didn’t win a lot of games.”

But, she adds: “I knew that standards were really important, and [so was] making sure that I was helping the team to have a good training facility, making sure that we weren’t under the shadow of the men’s team.”

“Those are the things that you’re judged by as a sporting director,” Aluko says. “We stayed up and now Aston Villa are in a position where they can build. I’m very proud of that.”

It was enough to get her noticed too, Villa’s success earning Aluko the opportunity to swap Aston for LA. 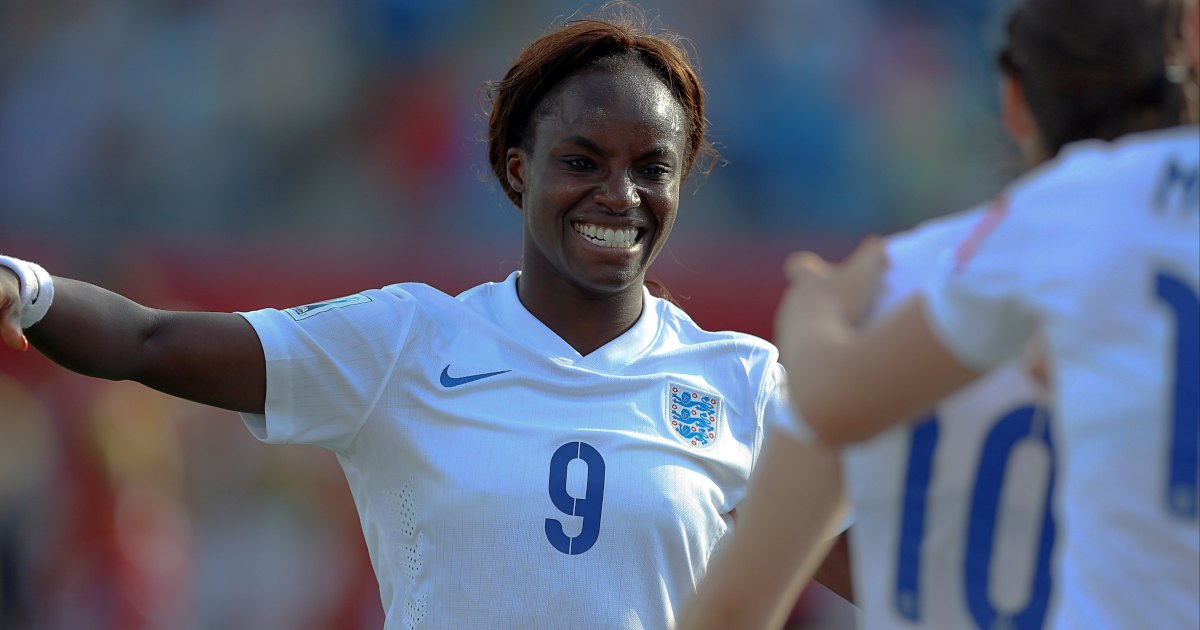 READ: Eniola Aluko: ‘The England team is not diverse, we can do better’

It’s not just the weather that’s changed for her following the move.

“American sports business is completely different. We’re dealing with hard salary caps. There’s no free agency, which has been around for 26 years in Europe,” she highlights.

This is where the differences mentioned at the start come in. Aluko is aiming to build a squad with a core group that has an emotional connection to the community, players who, as she puts it, “call LA home.” That might sound normal from a European perspective, but it is not always the case in US sports, where players can be traded between teams without their knowledge or consent.

“You would have seen a lot of the negative press that’s coming out of the NWSL last season,” Aluko says, a euphemistic reference to the abuse scandals that rocked the league in 2021.

“I come from a cultural standpoint [where] I just wanted to do things very differently. I’ve presented the project to every single player. There’s not a case of doing a deal with a club without the player knowing and then they wake up and find themselves in LA.

“Christen Press was our first signing. She’s from LA. It was a homecoming for her. We’re trying to build a much more player-focused culture than I think is the norm in the NWSL.”

Aluko experienced one of those unwanted trades when she was playing in the WPS, the league that preceded the NWSL. The trade, she says, “affected my football. It affected my happiness.

“Forget football. In any walk of life, if you don’t want to be in your job, you’re not going to do it to the best of your ability. If you’re effectively forced to be somewhere because the company owns you, it’s probably the most counterintuitive thing to do for someone’s performance.”

Natalie Portman reveals the name of her new women’s professional soccer team that is coming to Los Angeles in 2022! 👀⚽ #FallonTonight pic.twitter.com/VwKHdfKwXF

“[Female] players have typically not been paid well and, as a result, not been treated well. There’s this, ‘Just be grateful that you’re playing football in the first place.’ That kind of culture. Players just don’t have the confidence or self-esteem to be able to say, ‘No, this is what I want.’

“In the men’s game, there’s been an established order of players having a lot more say and a lot more power. Because they’re well paid and are seen as assets. I don’t know whether women’s players, globally, are seen as assets… We’re trying to move towards a culture where players just have a lot more investment in where they’re at and what they’re doing.”

Allied with that player focus, Aluko adds, is the desire to make a positive impact in the communities from which their support will be drawn.

Twenty per cent of the money from all sponsorship deals will be directed towards community projects, including ones focused on promoting women’s health, alleviating food poverty and developing a new generation of women’s soccer coaches.

All of that, of course, has to be balanced with the other aim: piecing together a team that can actually perform on the pitch.

Aluko says it is not easy to compete for talent with teams in Europe, England’s WSL in particular, owing to the “name association” and “brand power” of clubs with top men’s teams, like Arsenal, Chelsea and Manchester City.

Together with @DoorDash and @LAFoodBank, we’re working to help families feed their children. Community service is at the root of everything we stand for — and so far, we’ve provided 66,000 meals to families in need. 🙏 pic.twitter.com/Thu5pTrPVi

Aluko says they are drawn by the brand – the community and player focus described above. One imagines the club’s location doesn’t harm Aluko’s sales pitch either. In turn, Aluko adds, those international players allow Angel City to engage “fans from different continents” and build “a different dimension to the team.”

So far, the plan seems to be working. They’ve sold 14,000 season tickets, according to Aluko. But the proof of the pudding will be in the eating. The season starts in March.

“I’m very proud of the calibre of player that we’ve been able to bring in, despite being a new team. We’re yet to see how that translates on the field, but I’m confident that we will be competitive.

“It’s very, very difficult to achieve a playoff spot as an expansion team, but we aim to do that… What you want is the season ticket holders to feel like, ‘Wow, I’m really pleased I’ve got a ticket because this team’s really good.’”

For herself, Aluko says, the aim is to keep moving on up, too. “I’m really proud to have some equity in the club. For me, as a black female sporting director, I think that’s really important, for people to know that it is possible for former players to have ownership in clubs.”

Aluko says seeing a woman in Amanda Stavely in an ownership role at Newcastle United is “exciting”, and adds: “I was really inspired when I read about LeBron James’ ownership of Liverpool.

“That’s something that I want to be able to represent a lot more. When players finish their careers, can they get into the boardroom? Can they become part of ownership groups?”

“I’m really big on ownership because when you have that level of ownership, you’re able to really influence meaningful change and strategies. So, in future, I’m really keen on continuing to do that: establishing clubs, establishing ownership groups.”

In the short-term, though, she will need to leave the LA boardroom and get her boots back on for her Sunday league outing as part of that campaign to aid Football Beyond Borders.

She’s looking forward to the change, she says: “That’s what it’s all about, right? Just meeting new people, playing football together on a pitch that’s probably going to be really muddy, but who cares? All we need is a football and friends and we’ll be alright.”

For the chance to sign Eni Aluko or Roberto Carlos for your Sunday league team, enter eBay’s Dream Transfer for just £5 and raise money for Football Beyond Borders.